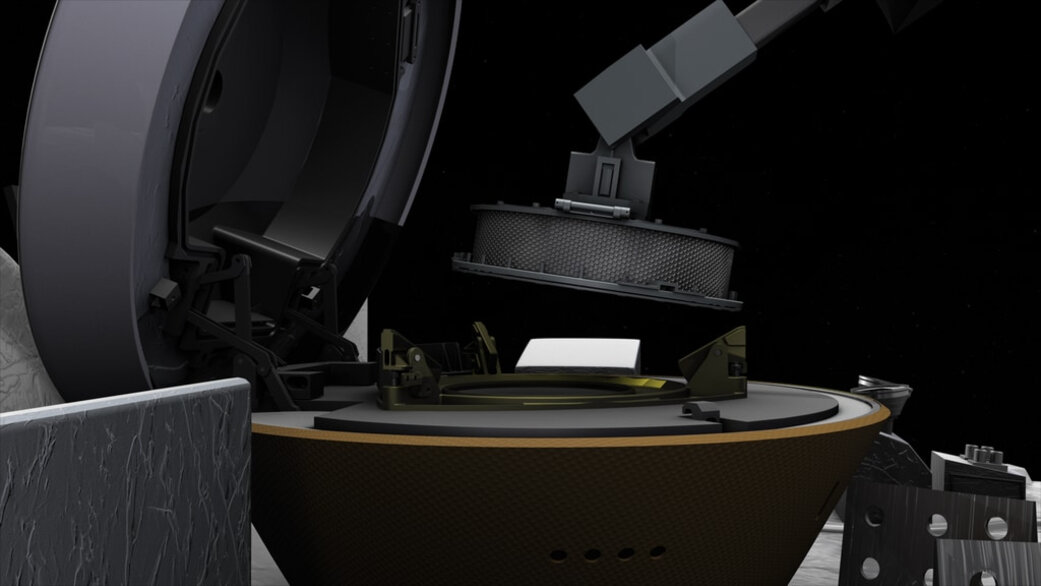 NASA’s OSIRIS-REx mission is ready to perform an early stow on Tuesday, Oct. 27, of the large sample it collected last week from the surface of the asteroid Bennu to protect and return as much of the sample as possible.

On Oct. 22, the OSIRIS-REx mission team received images that showed the spacecraft’s collector head overflowing with material collected from Bennu’s surface—well over the two-ounce (60-gram) mission requirement—and that some of these particles appeared to be slowly escaping from the collection head, called the Touch-And-Go Sample Acquisition Mechanism (TAGSAM).

A mylar flap on the TAGSAM allows material to easily enter the collector head, and should seal shut once the particles pass through. However, larger rocks that didn’t fully pass through the flap into the TAGSAM appear to have wedged this flap open, allowing bits of the sample to leak out.

Because the first sample collection event was so successful, NASA’s Science Mission Directorate has given the mission team the go-ahead to expedite sample stowage, originally scheduled for Nov. 2, in the spacecraft’s Sample Return Capsule (SRC) to minimize further sample loss.

“The abundance of material we collected from Bennu made it possible to expedite our decision to stow,” said Dante Lauretta, OSIRIS-REx principal investigator at the University of Arizona, Tucson. “The team is now working around the clock to accelerate the stowage timeline, so that we can protect as much of this material as possible for return to Earth.”

Unlike other spacecraft operations where OSIRIS-REx autonomously runs through an entire sequence, stowing the sample is done in stages and requires the team’s oversight and input. The team will send the preliminary commands to the spacecraft to start the stow sequence and, once OSIRIS-REx completes each step in sequence, the spacecraft sends telemetry and images back to the team on Earth and waits for the team’s confirmation to proceed with the next step.

Signals currently take just over 18.5 minutes to travel between Earth and the spacecraft one-way, so each step of the sequence factors in about 37 minutes of communications transit time. Throughout the process, the mission team will continually assess the TAGSAM’s wrist alignment to ensure the collector head is properly placed in the SRC. A new imaging sequence also has been added to the process to observe the material escaping from the collector head and verify that no particles hinder the stowage process. The mission anticipates the entire stowage process will take multiple days, at the end of which the sample will be safely sealed in the SRC for the spacecraft‘s journey back to Earth.

“I’m proud of the OSIRIS-REx team’s amazing work and success to this point,” said NASA’s Associate Administrator for Science Thomas Zurbuchen. “This mission is well positioned to return a historic and substantial sample of an asteroid to Earth, and they’ve been doing all the right things, on an expedited timetable, to protect that precious cargo.”