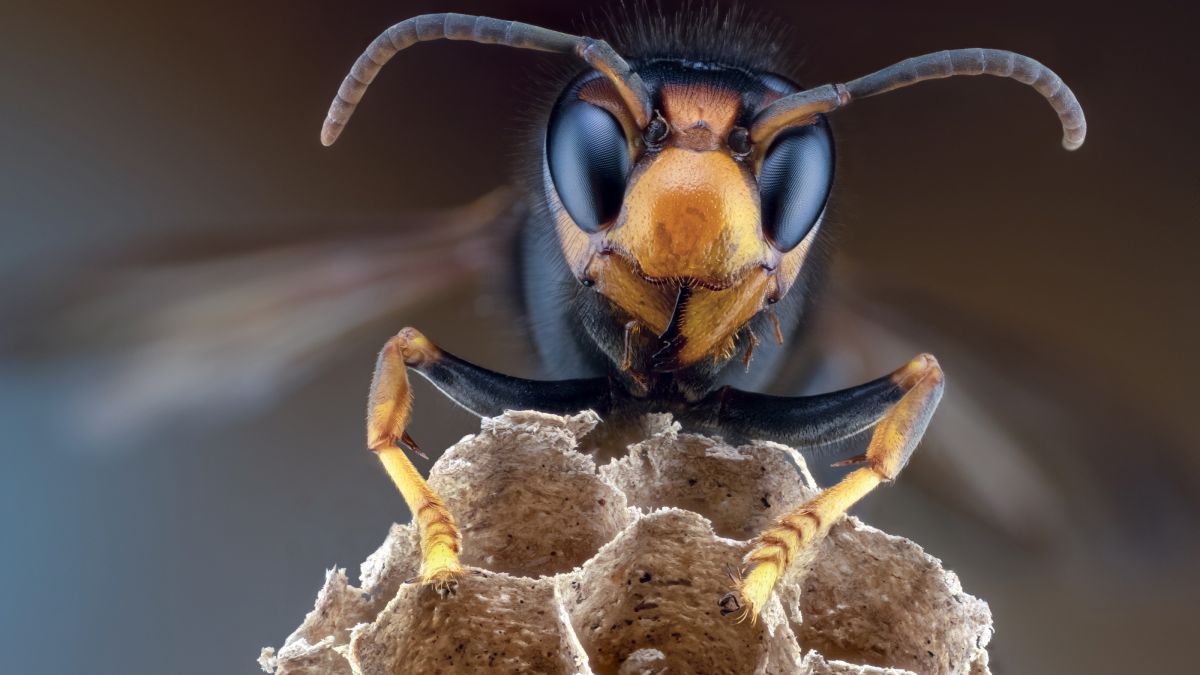 The Asian giant hornet (Vespa mandarinia) is dubbed a “murderer” for a reason: These thumb-size insects literally rip off the heads of honeybees … by the thousands. And such murder hornets have reached the U.S., where they are wreaking havoc with their oversized curved stingers and venomous stings. Here’s a look at the pests, which are the world’s largest hornets.

State Agriculture Department crews donned futuristic protective equipment on Saturday (Oct. 24, 2020) to destroy the first “murder hornet” nest ever found in the United States. The nest, in Blaine, Washington, was home to 100 to 200 Giant Asian hornets, an invasive species with a dangerous sting that reportedly feels like being pierced with a hot nail.

An agricultural department employee holds up a vacuum canister of Giant Asian hornets, which can grow 1.75 inches (4.4 centimeters) in length. The hornets are capable of spraying venom from their stingers, which can cause serious eye injury. Because they feed on other insects, they are a grave threat to honeybees, which farmers rely on for pollinating crops.

To find the nest, entomologists set non-lethal traps for the hornets. After catching four, they fitted them with radio trackers attached with dental floss and followed them back to their colony. Washington State Department of Agriculture entomologist Chris Looney sets a trap in Blaine, Washington, in this image from May 7.

Giant Asian hornets are native to South and East Asia, but have been spotted in Canada and Washington state in 2019 and 2020. Despite their “murder hornet” moniker, the wasps are not usually deadly to humans, though they can cause fatalities by anaphylactic shock, usually after multiple stings.

“Murder hornets” earn their nickname when it comes to bees. According to Washington state entomologists, the hornets can destroy tens of thousands of bees in a matter of hours by ripping them into pieces. They then feed the dismembered bees to their larvae.

Washington State Department of Agriculture entomologist Chris Looney fills a tree cavity with carbon dioxide after vacuuming out a nest of Giant Asian hornets in Blaine, Washington. The tree will be cut down so entomologists can find any larvae and determine if any queens may have left to establish new nests.

A Giant Asian hornet nest (not the one discovered in Blaine, Washington). Nests can host up to 800 hornets. The one in Blaine was home to an estimated 100 to 200 hornets.

Washington state officials believe that there may be more Giant Asian hornet nests in or around Blaine. Entomologists plan to search the area for other hives in hope of containing the spread of the invasive species.