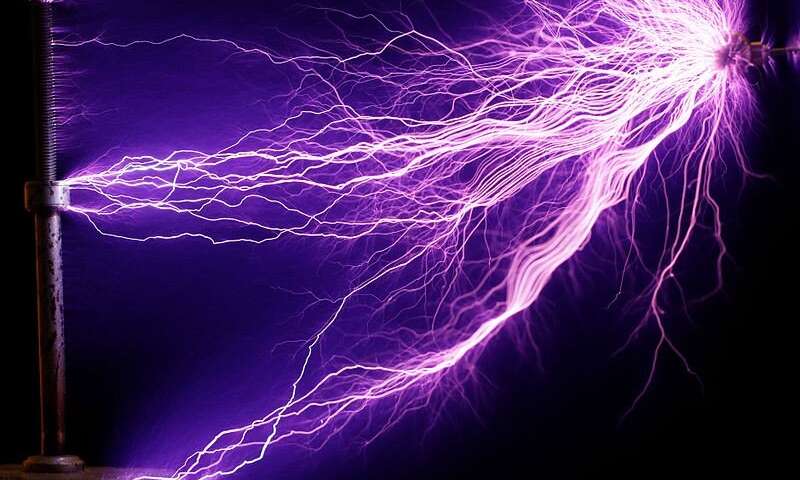 Scientists have figured out a way to perfectly beam energy across any room, thanks to a sci-fi like device they call an “anti-laser.”

The idea is simple: Just like a laser emits light particles, or photons, one after another in a neat and orderly row, an anti-laser sucks up photons one after another in reverse order. Researchers have long speculated that a device like this might make wires and charging cables a thing of the past, allowing people to beam energy invisibly across a room to a laptop or phone and power it without plugging it in. But though basic anti-lasers have been tested before, the real world isn’t as neat and orderly as a laser pointed at a fixed receiver in a laboratory. Electronics move around, objects get in the way, walls reflect energy in unexpected ways. The new anti-laser demonstrated in this experiment accounts for all that, and it receives scattered energy beamed around a space in an unpredictable pattern — still receiving 99.996% of the sent power.

The formal term for the method they used is “coherent perfect absorption” (CPA). CPA uses one machine to send power across the room, and another (the “anti-laser”) to suck it back up. Past CPA experiments, the researchers wrote in a paper published Nov. 17 in the journal Nature Communications, were exciting but had a fundamental limitation: the direction of time. The experiments worked only in situations where time could flow as easily backward as forward, which rarely exist in our day-to-day lives.

The simplest model of an anti-laser setup, involving a laser pointer shooting photons one after another into a receiver that gobbles them up, would look basically the same whether you played a tape of its action forward or backward: Photon pops out of one device, travels across space and enters the other device. Setups like this, in physics terms, are said to have “time reversal symmetry.” Time-reversal symmetry only pops up in systems without much entropy, or the inherent tendency of systems to descend into disorder.

Until now, even the most complex CPA experiments have had time reversal symmetry. Some were more complex than the laser pointer aimed at a receiver. But even complicated projects have that symmetry if they’re set up such that the process can be reversed.

(Here’s an example of how a complicated event can be time reversal symmetric: Imagine a videotape of a hobbyist picking up Lego pieces from a neatly organized case and using them to build a model Eiffel Tower. The result would look complicated, but the tape would record where every piece had gone, so playing the tape backward would just show the hobbyist taking apart the pieces and organizing them again.)

But for this new work, the researchers used magnetic fields to jostle the photons so aggressively that time reversal symmetry was lost. The process of transferring power — shooting the photons — was like stirring soup: It doesn’t work backward. (Imagine trying to un-stir soup.) But the device still received the power.

This “proves that the concept of CPA goes far beyond its initial conception as a ‘time-reversed laser,'” the researchers wrote in their paper, suggesting it might one day have practical applications in the real world. That’s because the real world isn’t as neat as a time-reversible laboratory experiment. It’s messy and unpredictable, and never time-reversible over the long term. For CPA to work in those challenging conditions, it has to be able to deal with it.

The researchers pulled off this non-time reversed CPA in two experimental setups, both using microwave energy. The first was a “labyrinth” of wires that photons had to navigate to reach a receiver. The second was a small, irregular “brass cavity” with a receiver in the middle, which the photons reached after scattering and traversing the open space in the cavity.

To pull this off, the researchers emitted microwaves of different properties, and tested which combination of frequencies, amplitudes and phases (three features of any electromagnetic wave) was most likely to land on the receiver and get absorbed — even after passing through the magnetic fields and the labyrinth or irregular open space. In each case, they determined an ideal “tuning” of the microwave emitter that caused most of the microwaves to get absorbed (99.999% in the labyrinth, 99.996% in the open space). In real-world applications (like your living room), the emitter would test and retest the different frequencies, amplitudes and phases to transfer photons to its receiver.

There are three major potential applications of this technology. The first is wireless energy transfer at a distance, the researchers wrote. (Goodbye to plugging in your laptop.) Another is a sensing device that could detect subtle changes in any room where the photons are scattered. (Imagine a security camera that can feel an intruder moving through a room.)

The third is a messaging system that could securely transfer information to a hidden receiver; signals sent over CPA could use the constantly-changing tuning numbers as a sort of password to encrypt data. Only the receiver or someone who knew the receiver’s exact behavior from moment to moment could decrypt the message.

Any such real-world uses are still a long way off. But this experiment shows they’re at least possible, the researchers wrote.