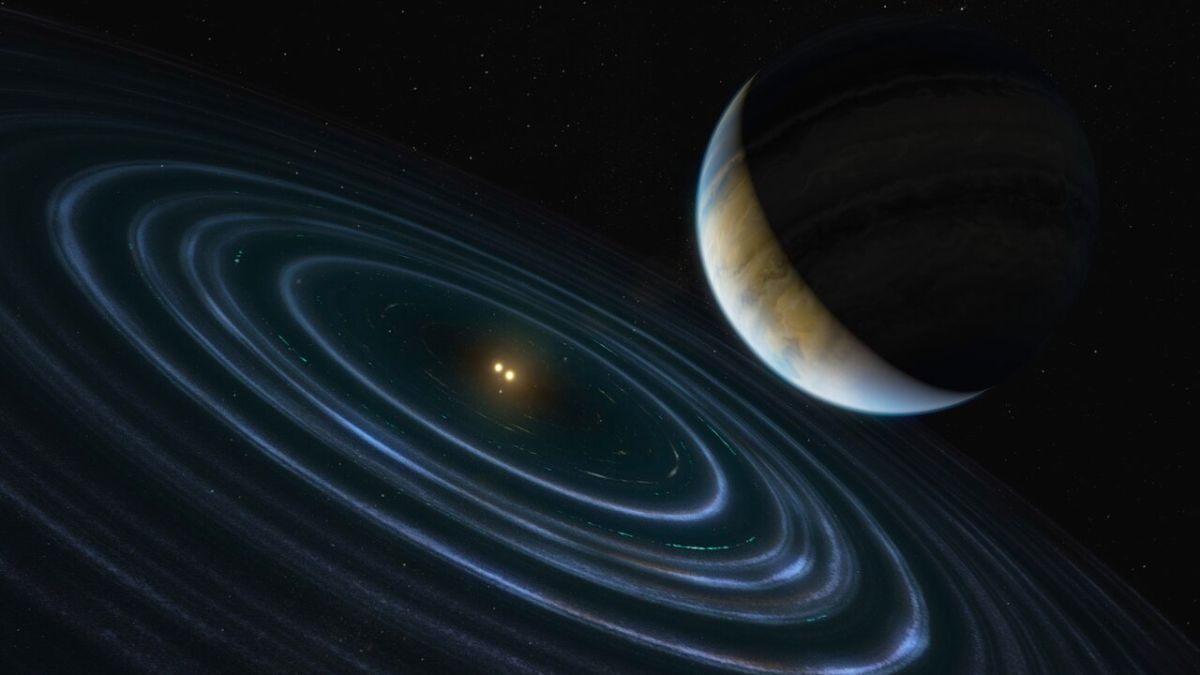 An enormous exoplanet found circling a double star 336 light-years away may provide clues to a mystery closer to home.

In the far reaches of the solar system, out beyond Neptune, exists a cluster of icy celestial objects known as extreme trans-Neptunian object that move in unexpected ways. Some astronomers think these objects are responding to the gravitational pull of a yet-unobserved planet, known as Planet Nine, which orbits very, very far away. Others think the weird objects are responding to the cumulative pull of other small objects, not to one large planet.

The new discovery of an exoplanet named HD 106906 b could help explain how a planet could get kicked to the far edges of the solar system without being ejected altogether, according to researchers with the Hubble Space Telescope.

The planet is 11 times the size of Jupiter and was first discovered in 2013. However, until now, its orbit was a mystery. That’s because the exoplanet circles mind-bogglingly far from the pair of stars at the center of its system: more than 730 times the distance between the Earth and sun. And because the gravitational pull of the stars is relatively weak at that distance, the planet orbits slowly, making a revolution once every 15,000 years.

Measurements with the Hubble Space Telescope enabled researchers to characterize this snail-slow orbit. They discovered that the orbit is elongated and inclined at an odd angle. It’s also outside a dusty disc of debris circling the star pair.

Related: 10 interesting places in the solar system we’d like to visit

“To highlight why this is weird, we can just look at our own solar system and see that all of the planets lie roughly in the same plane,” study leader Meiji Nguyen, an astronomer at the University of California, Berkeley, said in a statement. “It would be bizarre if, say, Jupiter just happened to be inclined 30 degrees relative to the plane that every other planet orbits in. This raises all sorts of questions about how HD 106906 b ended up so far out on such an inclined orbit.”

A path to Planet Nine

Here’s what scientists think may have happened: The exoplanet formed quite close to its stars, even closer than Earth is to the sun. Over time, though, drag caused the exoplanet’s orbit to decay, which would have pulled it even closer to its host stars. Instead of colliding into them, though, the complex gravity of the pair of stars would have kicked the exoplanet into a new orbit, this one taking it far into space. Such an orbit could have sent the exoplanet beyond the gravitational reach of its host stars, kicking it out of the system altogether. But at the right moment, another star passed close to the alien system, stabilizing the exoplanet’s orbit and preventing it from being ejected.

Something similar may have happened in our own solar system, if Planet Nine exists. The hypothetical planet could have formed close to the sun, only to be kicked toward the edges of the solar system by Jupiter’s gravity. A passing star could have saved Planet Nine from being ejected altogether by pushing the planet away from Jupiter and toward the inner planets of the solar system. The Gaia project, an effort of the European Space Agency, is working to build a three-dimensional map of the galaxy over time that would help identify such possible stellar interactions early in the solar system’s history.

“It’s as if we have a time machine for our own solar system going back 4.6 billion years to see what may have happened when our young solar system was dynamically active and everything was being jostled around and rearranged,” study researcher Paul Kalas of the University of California, Berkeley said in the statement.

The new exoplanet gives astronomers a hint of what to look for in a possible Planet Nine. If it is anything like HD 106906 b, it should have an oddly inclined orbit, too. Astronomers are also planning to study HD 106906 b itself more carefully, in an attempt to learn how it formed and where.

The new findings appear today (Dec. 10) in The Astronomical Journal.