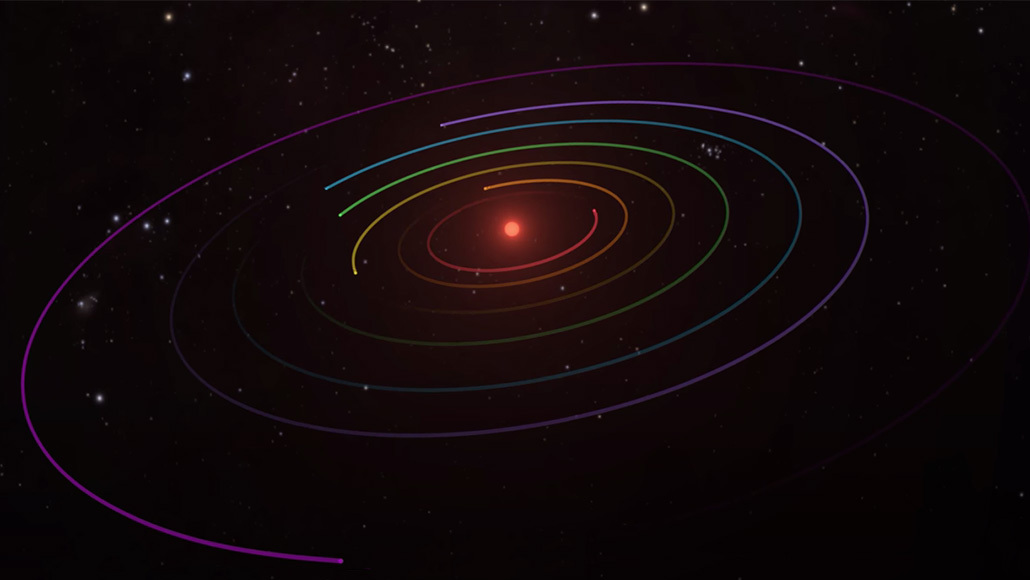 If you’re looking for life beyond the solar system, there’s strength in numbers.

A new study suggests that systems with multiple planets tend to have rounder orbits than those with just one, indicating a calmer family history. Only child systems and planets with more erratic paths hint at past planetary sibling clashes violent enough to knock orbits askew, or even lead to banishment. A long-lasting abundance of sibling planets might therefore have protected Earth from destructive chaos, and may be part of what made life on Earth possible, says astronomer Uffe Gråe Jørgensen of the Niels Bohr Institute in Copenhagen.

“Is there something other than the Earth’s size and position around the star that is necessary in order for life to develop?” Jørgensen says. “Is it required that there are many planets?”

Most of the 4,000-plus exoplanets discovered to date have elongated, or eccentric, orbits. That marks a striking difference from the neat, circular orbits of the planets in our solar system. Rather than being an oddity, those round orbits are actually perfectly normal — for a system with so many planets packed together, Jørgensen and his Niels Bohr colleague Nanna Bach-Møller report in a paper  published online October 30 in the Monthly Notices of the Royal Astronomical Society.

Bach-Møller and Jørgensen analyzed the eccentric paths of 1,171 exoplanets orbiting 895 different stars. The duo found a tight correlation between number of planets and orbit shape. The more planets a system has, the more circular their orbits, no matter where you look or what kind of star they orbit.

“This is a very important confirmation,” Turrini says. “It is providing us an idea of … how likely it is there will be no fight in the family, no destructive events, and your planetary system will remain as it formed … long enough to produce life.”

Systems with as many planets as ours are exceedingly rare, though. Only one known system comes close: the TRAPPIST-1 system, with seven roughly Earth-sized worlds (SN: 2/22/17). Astronomers have found no solar systems so far, other than ours, with eight or more planets. Extrapolating out to the number of stars expected to have planets in the galaxy, Jørgensen estimates that about 1 percent of planetary systems have as many planets as we do.

“It’s not unique, but the solar system belongs to a rare type of planetary system,” he says.

That could help explain why life seems to be rare in the galaxy, Jørgensen suggests. Exoplanet studies indicate that there are billions of worlds the same size as Earth, whose orbits would make them good places for liquid water. But just being in the so-called “habitable zone” is not enough to make a planet habitable (SN: 10/4/19).

“If there are so many planets where we could in principle live, why are we not teeming with UFOs all the time?” Jørgensen says. “Why do we not get into traffic jams with UFOs?”

The answer might lie in the different histories of planetary systems with eccentric and circular orbits. Theories of solar system formation predict that most planets are born in a disk of gas and dust that encircles a young star. That means young planets should have circular orbits, and all orbit in the same plane as the disk.

“You want the planets to not come too close to each other, otherwise their interactions might destabilize the system,” says Torrini. “The more planets you have the more delicate the equilibrium is.”

Planets that end up on elliptical orbits may have gotten there via violent encounters with neighboring planets, whether direct collisions that break both planets apart or near-misses that toss the planets about (SN: 2/27/15). Some of those encounters may have ejected planets from their solar systems altogether, possibly explaining why planets with eccentric orbits have fewer siblings (SN: 3/20/15).

Earth’s survival may therefore have depended on its neighbors playing nice for billions of years (SN: 5/25/05). It doesn’t need to have escaped violence altogether, either, Jørgensen says. One popular theory holds that Jupiter and Saturn shifted in their orbits billions of years ago, a reshuffling that knocked the orbits of distant comets askew and send them careening into the inner solar system. Several lines of evidence suggest comets could have brought water to the early Earth (SN: 5/6/15).

“It’s not the Earth that is important,” Jørgensen says. “It’s the whole configuration of the planetary system that’s important for life to originate on an earthlike planet.”