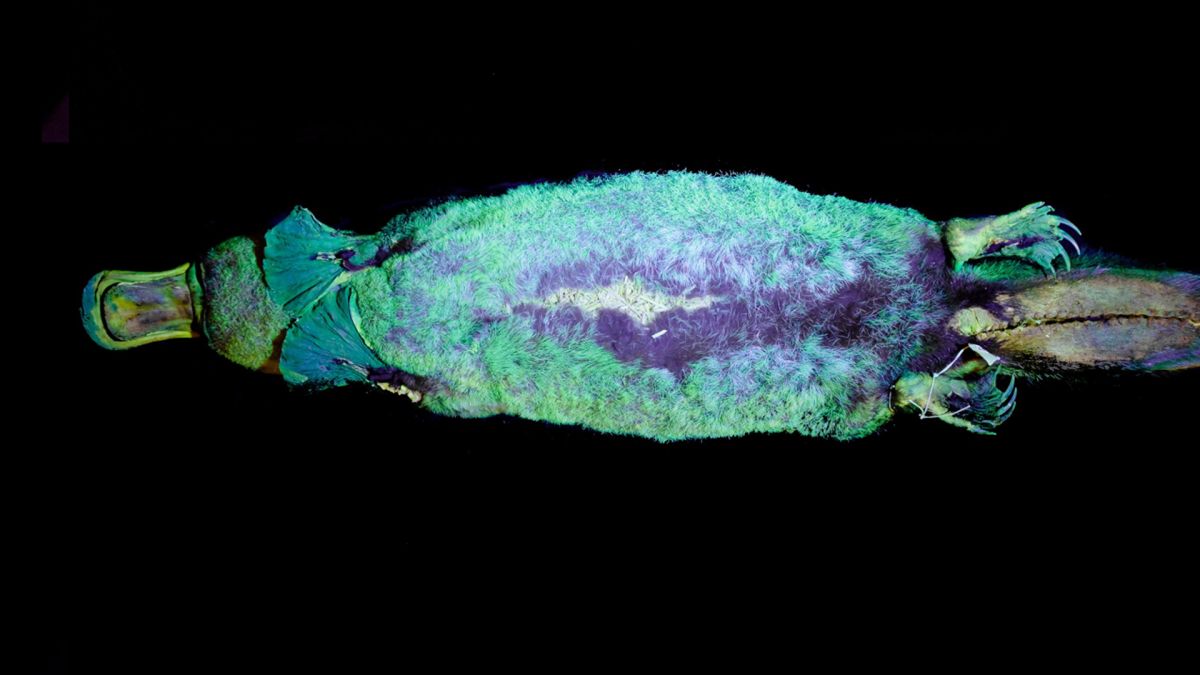 Duck-billed, egg-laying platypuses just got a little weirder: It turns out their fur glows green and blue under ultraviolet (UV) light.

Under visible light a platypus’s extremely dense fur — which insulates and protects them in cold water — is a drab brown, so the trippy glow revealed under UV light on a stuffed museum specimen was a big surprise.

Biofluorescence — absorbing and re-emitting light as a different color — is widespread in fish, amphibians, birds and reptiles. But the trait is much rarer in mammals, and this is the first evidence of biofluorescence in egg-laying mammals, also known as monotremes, scientists reported in a new study.

Prior to this discovery, biofluorescence was known in only two mammals: flying squirrels, which are placental mammals, and opossums, which are marsupials, according to the study, published online Oct. 15 in the journal Mammalia.

While testing the flying squirrel museum specimens for signs of biofluorescence, they decided to look at other mammal species in the same collections too, according to a statement.

Platypuses are semiaquatic and live in eastern Australia, and they are such a peculiar hodgepodge of body parts that they seem cobbled together from unrelated animals; so perhaps fittingly, their scientific name, Ornithorhynchus anatinus, means bird-snouted flat-foot, according to London’s Natural History Museum (NHM).

These oddball mammals have furry bodies; flat and hairless beaver-like tails; webbed feet (males also have spurs on their hind legs that are loaded with venom); and broad bills like a duck’s. When 19th-century Europeans first saw preserved skins of these strange-looking creatures, many experts thought the animal was a taxidermy hoax, with a duck’s beak sewn to a mole’s body, according to NHM.

The discovery of platypuses’ fluorescent glow came from two specimens from Tasmania, Australia, in the collection of The Field Museum in Chicago. Both specimens — one male and one female — displayed the glow, according to the study. The scientists then tested a third specimen at the University of Nebraska State Museum in Lincoln, Nebraska; that platypus, a male, had been collected in New South Wales, Australia. It also glowed green in UV light.

The greenish-bluish color displayed a similar pattern and intensity in the male and female platypuses, suggesting it isn’t a sexual trait tied to reproduction, the researchers reported.

Platypuses navigate their twilit, aquatic environments through mechanoreception, the detection of mechanical stimuli such as touch and sound, and electrostimulation, the perception of natural electrical signals. Because they don’t rely heavily on sight, it’s possible that their biofluorescence is not used to communicate with each other, but to reduce their visibility to predators, as in the case in some biofluorescent crustaceans.

“However, field-based research will be essential to document platypus biofluorescence and its ecological function in wild animals,” the study authors wrote.

Discovering the platypus’s secret glow also sheds light on this trait in mammals, revealing that it’s not just a few highly specialized species that glow in the dark.

“Instead, it appears across the phylogeny,” the scientists said.

These biofluorescent mammals occupy diverse ecosystems spanning three continents. And now, with the addition of the platypus, they represent all of the major mammalian lineages; placental mammals, marsupials and monotremes. One possible explanation is that mammal biofluorescence, rare though it is, may be an ancestral trait that emerged early in the group’s family tree, according to the study.