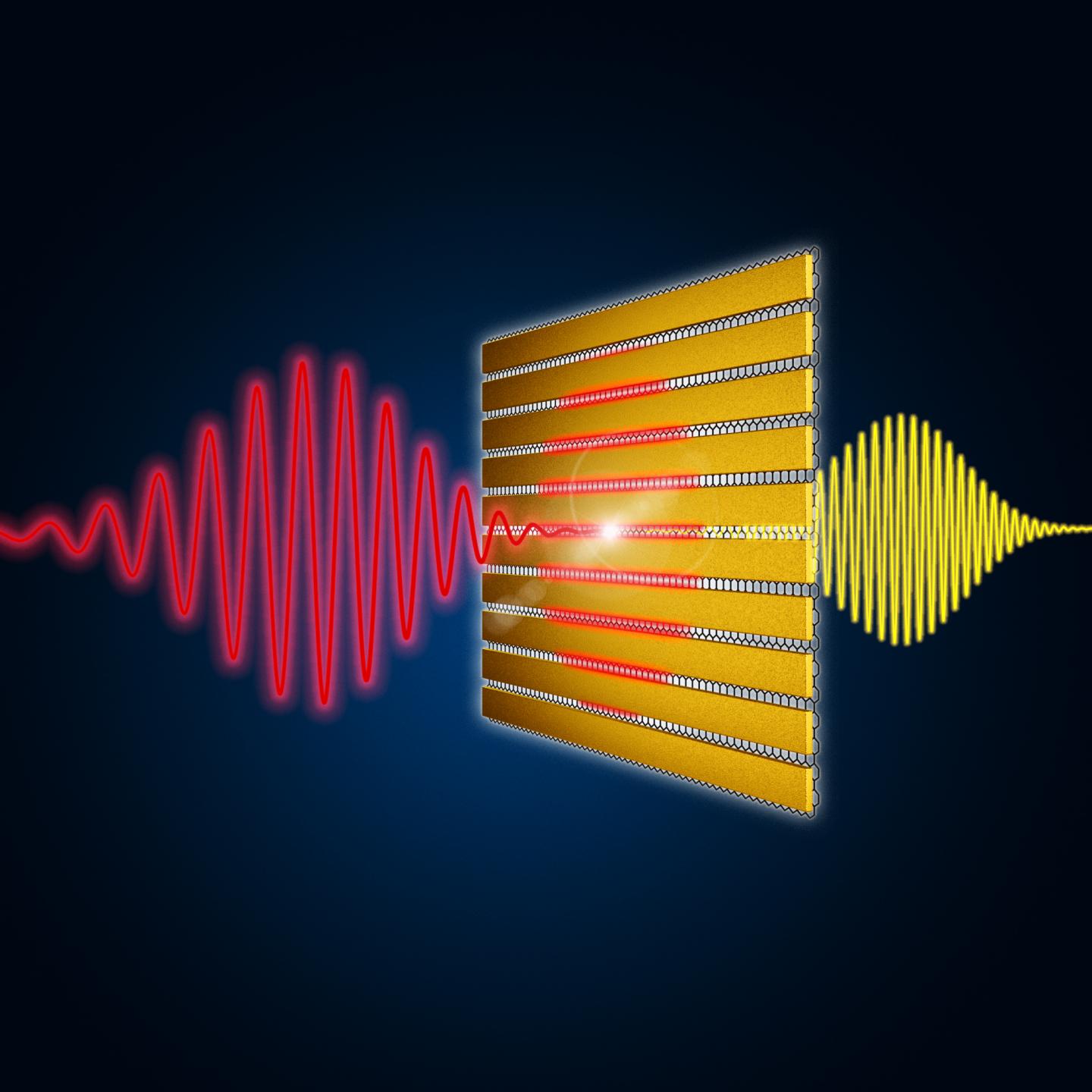 On the electromagnetic spectrum, terahertz light is located between infrared radiation and microwaves. It holds enormous potential for tomorrow’s technologies: Among other things, it might succeed 5G by enabling extremely fast mobile communications connections and wireless networks. The bottleneck in the transition from gigahertz to terahertz frequencies has been caused by insufficiently efficient sources and converters. A German-Spanish research team with the participation of the Helmholtz-Zentrum Dresden-Rossendorf (HZDR) has now developed a material system to generate terahertz pulses much more effectively than before. It is based on graphene, i.e., a super-thin carbon sheet, coated with a metallic lamellar structure. The research group presented its results in the journal ACS Nano (DOI: 10.1021/acsnano.0c08106).

Some time ago, a team of experts working on the HZDR accelerator ELBE were able to show that graphene can act as a frequency multiplier: When the two-dimensional carbon is irradiated with light pulses in the low terahertz frequency range, these are converted to higher frequencies. Until now, the problem has been that extremely strong input signals, which in turn could only be produced by a full-scale particle accelerator, were required to generate such terahertz pulses efficiently.”This is obviously impractical for future technical applications,” explains the study’s primary author Jan-Christoph Deinert of the Institute of Radiation Physics at HZDR. “So, we looked for a material system that also works with a much less violent input, i.e., with lower field strengths.”

For this purpose, HZDR scientists, together with colleagues from the Catalan Institute of Nanoscience and Nanotechnology (ICN2), the Institute of Photonic Sciences (ICFO), the University of Bielefeld, TU Berlin and the Mainz-based Max Planck Institute for Polymer Research, came up with a new idea: the frequency conversion could be enhanced enormously by coating the graphene with tiny gold lamellae, which possess a fascinating property: “They act like antennas that significantly amplify the incoming terahertz radiation in graphene,” explains project coordinator Klaas-Jan Tielrooij from ICN2. “As a result, we get very strong fields where the graphene is exposed between the lamellae. This allows us to generate terahertz pulses very efficiently.”

To test the idea, team members from ICN2 in Barcelona produced samples: First, they applied a single graphene layer to a glass carrier. On top, they vapor-deposited an ultra-thin insulating layer of aluminum oxide, followed by a lattice of gold strips. The samples were then taken to the TELBE terahertz facility in Dresden-Rossendorf, where they were hit with light pulses in the low terahertz range (0.3 to 0.7 THz). During this process, the experts used special detectors to analyze how effectively the graphene coated with gold lamellae can multiply the frequency of the incident radiation.

“It worked very well,” Sergey Kovalev is happy to report. He is responsible for the TELBE facility at HZDR. “Compared to untreated graphene, much weaker input signals sufficed to produce a frequency-multiplied signal.” Expressed in numbers, just one-tenth of the originally required field strength was enough to observe the frequency multiplication. And at technologically relevant low field strengths, the power of the converted terahertz pulses is more than a thousand times stronger thanks to the new material system. The wider the individual lamellae and the smaller the areas of graphene that are left exposed, the more pronounced the phenomenon. Initially, the experts were able to triple the incoming frequencies. Later, they attained even larger effects – fivefold, sevenfold, and even ninefold increases in the input frequency.

This offers a very interesting prospect, because until now, scientists have needed large, complex devices such as accelerators or large lasers to generate terahertz waves. Thanks to the new material, it might also be possible to achieve the leap from gigahertz to terahertz purely with electrical input signals, i.e., with much less effort. “Our graphene-based metamaterial would be quite compatible with current semiconductor technology,” Deinert emphasizes. “In principle, it could be integrated into ordinary chips.” He and his team have proven the feasibility of the new process – now implementation in specific assemblies may become possible.

The potential applications could be vast: Since terahertz waves have higher frequencies than the gigahertz mobile communications frequencies used today, they could be used to transmit significantly more wireless data – 5G would become 6G. But the terahertz range is also of interest to other fields – from quality control in industry and security scanners at airports to a wide variety of scientific applications in materials research, for example.

Institute of Radiation Physics at HZDR

The Helmholtz-Zentrum Dresden-Rossendorf (HZDR) performs – as an independent German research center – research in the fields of energy, health, and matter. We focus on answering the following questions:

HZDR is a member of the Helmholtz Association and has six sites (Dresden, Freiberg, Grenoble, Görlitz, Leipzig, Schenefeld near Hamburg) with almost 1,200 members of staff, of whom about 500 are scientists, including 170 Ph.D. candidates.