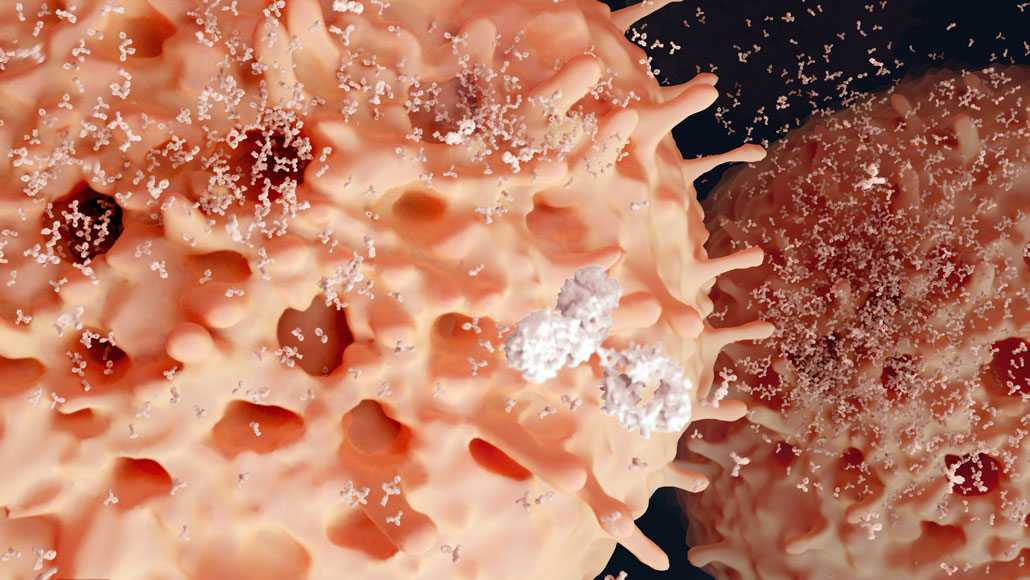 Some immune defenses of the brain may have their roots in the gut.

A new study in mice finds that immune cells are first trained in the gut to recognize and launch attacks on pathogens, and then migrate to the brain’s surface to protect it, researchers report online November 4 in Nature. These cells were also found in surgically removed parts of human brains.

Every minute, around 750 milliliters of blood flow through the brain, giving bacteria, viruses or other blood-borne pathogens an opportunity to infect the organ. For the most part, the invaders are kept out by three membrane layers, called the meninges, which wrap around the brain and spinal cord and act as a physical barrier. If a pathogen does manage to breach that barrier, the researchers say, the immune cells trained in the gut are ready to attack by producing a battalion of antibodies.

The most common route for a pathogen to end up in the bloodstream is from the gut. “So, it makes perfect sense for these [immune cells] to be educated, trained and selected to recognize things that are present in the gut,” says Menna Clatworthy, an immunologist at the University of Cambridge.

Clatworthy’s team found antibody-producing plasma cells in the leathery meninges, which lie between the brain and skull, in both mice and humans. These immune cells produced a class of antibodies called immunoglobulin A, or IgA.

These cells and antibodies are mainly found in the inner lining of the gut and lungs, so the scientists wondered if the cells on the brain had any link to the gut. It turned out that there was: Germ-free mice, which had no microbes in their guts, didn’t have any plasma cells in their meninges either. However, when bacteria from the poop of other mice and humans were transplanted into the mice’s intestines, their gut microbiomes were restored, and the plasma cells then appeared in the meninges.

“This was a powerful demonstration of how important the gut could be at determining what is found in the meninges,” Clatworthy says.

Researchers captured microscope images of an attack in the meninges of mice that was led by plasma cells that had likely been trained in the guts. When the team implanted a pathogenic fungus, commonly found in the intestine, into the mice’s bloodstream, the fungus attempted to enter the brain through the walls of blood vessels in the meninges. However, plasma cells in the membranes formed a mesh made of IgA antibodies around the pathogen, blocking its entry. The plasma cells are found along the blood vessels, Clatworthy says, where they can quickly launch an attack on pathogens.

“To my knowledge, this is the first time anyone has shown the presence of plasma cells in the meninges. The study has rewritten the paradigm of what we know about these plasma cells and how they play a critical role in keeping our brain healthy,” says Matthew Hepworth, an immunologist at the University of Manchester in England who was not involved with the study. More research is needed to classify how many of the plasma cells in the meninges come from the gut, he says.

The finding adds to growing evidence that gut microbes can play a role in brain diseases. A previous study, for instance, suggested that in mice, boosting a specific gut bacterium could help fight amyotrophic lateral sclerosis, or ALS, a fatal neurological disease that results in paralysis (SN: 8/17/19). And while the new study found the plasma cells in the brains of healthy mice, previous research has found other gut-trained cells in the brains of mice with multiple sclerosis, an autoimmune disease of the brain and the spinal cord.

For now, the researchers want to understand what cues plasma cells follow in the guts to know it is time for them to embark on a journey to the brain.