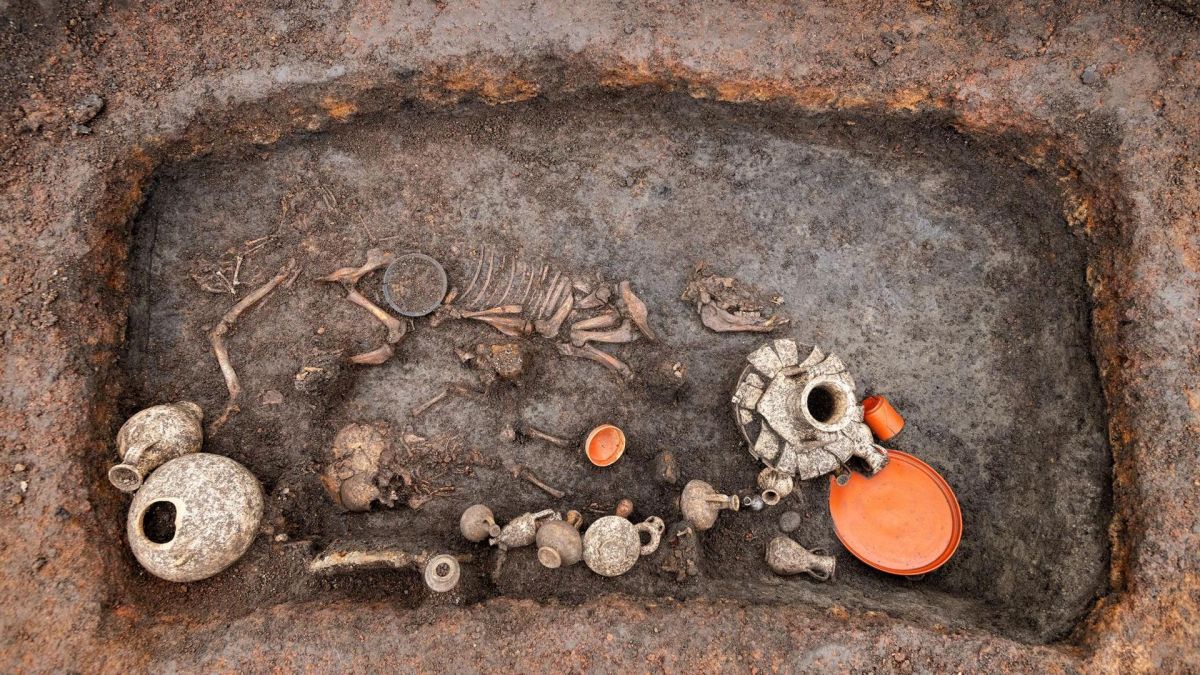 Around Jesus’ time about 2,000 years ago, a toddler in Roman-era Europe was laid to rest in a burial containing a funeral banquet and a pet dog wearing a belled collar, according to the French National Institute for Preventive Archaeological Research (INRAP). Researchers don’t yet know whether the puppy died of natural causes or whether it was killed to accompany the toddler into the afterlife.

“Such a profusion of crockery and butchered items, as well as the personal effects that followed the child to his grave, underline the privileged rank to which his family belonged.” the archaeologists said in an INRAP statement (translated from French). “A dog’s association with a young child is well documented in a funeral context, but here it is the collar and bell that are unusual.”

The toddler was just 1 year old when he died. It’s unknown whether the toddler was male or female — it’s challenging to determine sex in children, at least from anatomical analyses — but the INRAP report refers to the child as “he.”

When archaeologists unearthed the burial in November 2020, they noted that it was located on the fringes of a settlement in Romanized Gaul. The burial dates to the Augusto-Tiberian era, or sometime during the reigns of the first and second Roman emperors: Augustus (ruled 27 B.C. to A.D. 14) and Tiberius (ruled A.D. 14 to A.D. 37), meaning the toddler lived during or just after Jesus’ time.

The fitted wooden coffin was small, just 2.6 feet (80 centimeters) long. Although its wood had decayed long ago, the archaeologists found an ornamental iron tag and nails that had once decorated and held the coffin together. The coffin had been placed in a larger pit that held the remains of the pet puppy and several terracotta containers, the archaeologists said.

Whoever buried the toddler filled the terracotta containers with food and drink and placed them around the youngster’s coffin. In those times, it was customary to divy up the funeral banquet, serving portions to the living and burying the rest with the deceased. In this instance, the burial contained half a pig and servings of ham (the meat from the pig’s thigh), pork and two headless chickens, the archaeologists said.

The team also found miniature vases and two glass pots that may have held oils or medicinal products, but researchers won’t know for sure until they do chemical analyses on the artifacts, they said.

The other grave goods included an ornamental copper pin and a nearly 12-inch-diameter (30 cm) iron ring next to a bent rod, which may have been a hoop-and-wand-like toy. The end of the rod lay between the legs of the puppy, which was placed at the deceased’s feet, outside the coffin. Like the other grave goods, the puppy’s collar was remarkable — it was adorned with 15 bronze decorations, as well as a bell.

The burial also contained a small but “touching” discovery: a baby tooth placed inside of a shell, the archaeologists said. Perhaps, the tooth belonged to a sibling of the deceased, they said.

The archaeologists plan to continue excavations at the site until February 2021.