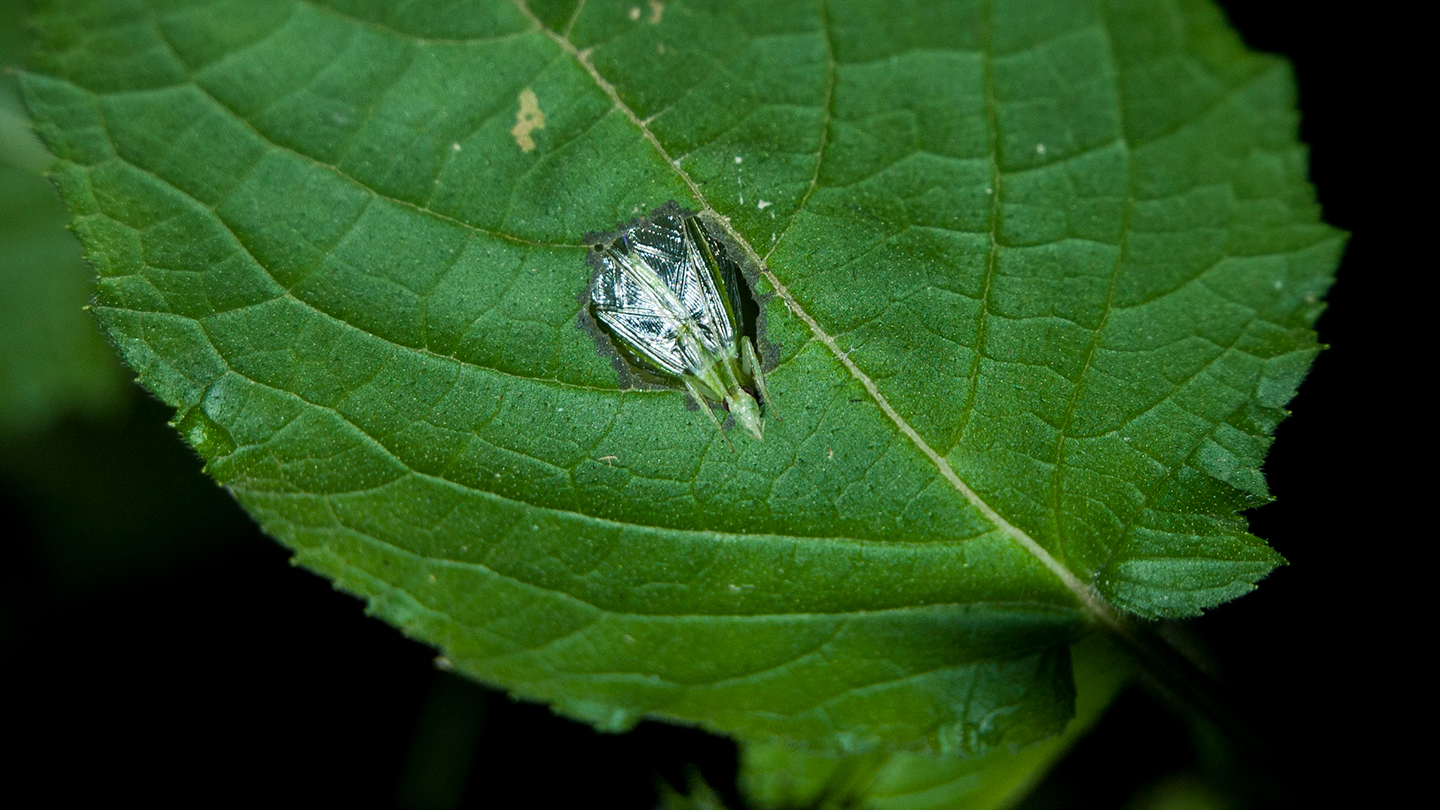 The rules of the tree cricket world, sexually speaking, are simple.

Perched from a leaf’s edge, males call out into the night by rhythmically rubbing their wings. Females survey the soundscape, gravitating towards the loudest and largest males. Small, quiet types get drowned out.

Unless they cheat the system.

Some male crickets make their own megaphones by cutting wing-sized holes into the center of leaves. With their bodies stuck halfway through this vegetative speaker, male Oecanthus henryi crickets can more than double the volume of their calls, allowing naturally quiet males to attract as many females as loud males, researchers report December 16 in Proceedings of the Royal Society B.

It’s a rare example of insect tool use that “really challenges you to think about what it takes to produce complex behavior,” says Marlene Zuk, an evolutionary biologist at the University of Minnesota in St. Paul who wasn’t involved in the study.

Biologists first spotted crickets creating leaf-speakers, called baffles, and singing from them, or baffling, in 1975. Since then, the baffling behavior has been reported in two other species, but wasn’t clear exactly how it benefits individual crickets.

Rittik Deb, an evolutionary ecologist at the National Centre for Biological Sciences in Bangalore, India, was stunned when he first witnessed an O. henryi male baffling. “It was mind-bogglingly beautiful,” he says, “I had to understand why it was happening.”

Deb and his colleagues first looked for any commonalities among crickets who use baffles. Only 25 out of 463, or 5 percent, of crickets observed and individually marked at field sites outside Bangalore were seen baffling. On average, baffling males were smaller, and called more quietly when not baffling. In the field, Deb found that baffling approximately doubles the volume of a quiet male’s call, raising them to the level of the most attractive males.

Cricket wings are essentially resonance structures, reverberating with the vibration caused by rubbing, sort of like the body of a violin (SN: 4/30/12). When bafflers crawl through a hole in a leaf, align their wings with the leaf and start to sing, they’re essentially expanding this resonance structure, using the leaf “a bit like a loudspeaker or a megaphone,” Deb says.

Do females fall for their inflated calls? Yes, according to lab experiments. When given a choice, females overwhelmingly prefer louder calls, even when these come from baffling males. Baffling essentially evens the playing field, allowing quiet males to attract just as many females as louder males.

The benefits of baffling don’t stop there.

The climax of cricket mating is the transfer of the spermatophore, a protein ball packed with sperm. Females dictate how much sperm they accept by how long they retain the spermatophore. With larger males, it’s about 40 minutes, compared with only 10 minutes for small males. But when Deb artificially boosted the calls of small and quiet males, females treated them like large males, retaining their spermatophores for longer. “That really surprised us,” Deb says. “It’s as though the females are in some sense being deceived.”

It’s unclear why females don’t seem to notice that they’re mating with a smaller male, though it’s not necessarily surprising. “They’re not wrapping their little arms around males to see whether they’re big or small,” Zuk says. “Maybe there’s something in the song that signals ‘go ahead and have more of this guy’s babies.’”

Whatever the mechanism, O. henryi males have evolved a remarkably effective mating strategy, Zuk says. The behavior appears to be innate, not learned, as lab-raised crickets of all sizes can make and use baffles when given leaves. “It makes me really want to know why such a small portion of males actually do this,” Zuk says.

Baffling might not be worth the extra work for larger males that can already attract plenty of females. But there are many small and quiet males who could presumably reap huge rewards by baffling, but don’t. Perhaps the crickets face a shortage of big enough leaves, or maybe baffling males face a trade-off: With their antennae blocked by the leaf, baffling could make crickets sitting ducks for predators such as geckos and spiders to attack from behind.

Despite potential costs, it’s clear these crickets have evolved a clever way of bending the natural world to their interests. Such tool use among animals is varied, from primates cracking nuts with stones to puffins scratching themselves with sticks (SN: 6/24/19;SN: 12/30/19). While some biologists may quibble with designating a baffle as a bona fide tool, these crickets show that sophisticated behaviors aren’t just for big, complex brains. “It really turns that idea on its head,” Deb says.