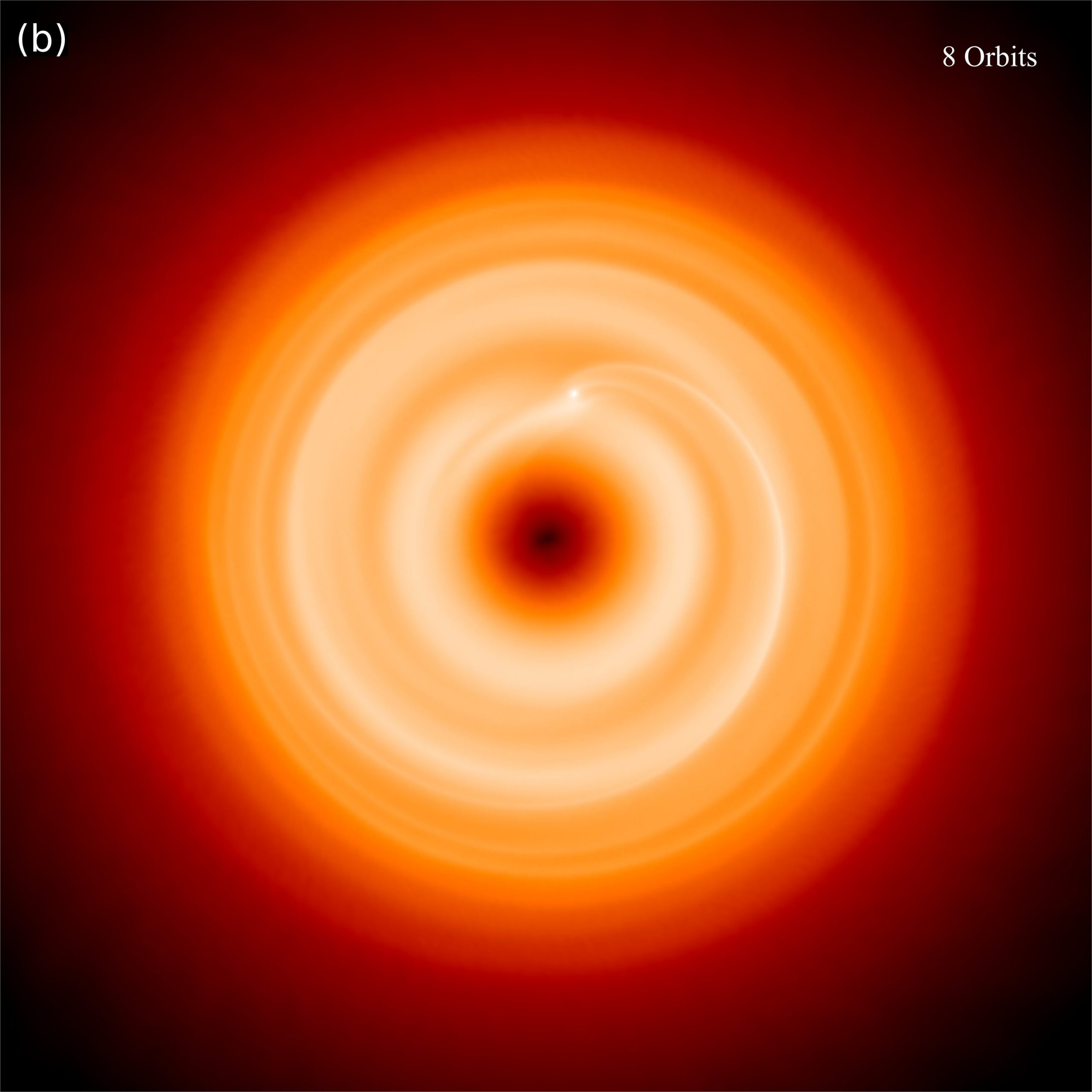 Giant planets that developed early in a star system’s life could solve a mystery of why spiral structures are not observed in young protoplanetary discs, according to a new study by University of Warwick astronomers.

The research, published today in the Astrophysical Journal Letters andpart supported by the Royal Society, provides an explanation for the lack of spiral structure that astronomers expect to see in protoplanetary discs around young stars that also suggests that scientists may have to reassess how quickly planets form in a disc’s lifecycle.

Protoplanetary discs are the birthplaces of planets, harbouring the material that will eventually coalesce into the array of planets that we see in the Universe. When these discs are young they form spiral structures, with all their dust and material dragged into dense arms by the massive gravitational effect of the disc spinning. A similar effect occurs at the galactic level, hence why we see spiral galaxies such as our own, the Milky Way.

Over the course of three to ten million years material from the disc comes together to form planets, falls onto the star it is orbiting or just disperses into space through winds coming off the disc. When a disc is young it is self-gravitating, and the material within it forms a spiral structure which it loses when it becomes gravitationally stable. Young planets that develop then carve out gaps in the disc as they consume and disperse material in their way, resulting in the ‘ring and gap’ features that astronomers most commonly see in protoplanetary discs.

But astronomers have struggled to account for observations of young protoplanetary discs that show no signs of spirals, but instead look like a disc much older with a ring and gap structure. To provide an explanation, Sahl Rowther and Dr. Farzana Meru from the University of Warwick Department of Physics conducted computer simulations of massive planets in young discs to determine what would happen when they interacted.

They found that a giant planet, around three times the mass of Jupiter, migrating from the outer regions of the disc towards its star would cause enough disruption to wipe out the disc’s spiral structure with results much like the discs observed by astronomers. However, to be present in the spiral stage of the disc those planets would have to form rapidly and early in the disc’s lifecycle.

Lead author Sahl Rowther, Ph.D. student in the Department of Physics, said: “When discs are young, we expect them to be massive with spiral structures. But we don’t see that in observations.

“Our simulations suggest that a massive planet in one of these young discs can actually shorten the time spent in the self-gravitating spiral phase to one that looks more like some of the observations that astronomers are seeing.

Co-author Dr. Farzana Meru from the Department of Physics adds: “If some of these discs that astronomers are observing were recently self-gravitating then that suggests they formed a planet while the disc was still young. The self-gravitating phase for a protoplanetary disc is much less than about half a million years, which means the planet would have to have formed incredibly quickly.

“Irrespective of what mechanism explains how these planets form, this probably means that we have to consider that planets form much faster than originally thought.”

Their simulations modelled a giant planet in the outer regions of a protoplanetary disc as it migrates inwards, a process that astronomers expect to see as the torque pushes the planet inwards as it exchanges angular momentum with the gas in the disc. This also means that the planet would interact with and disrupt a large proportion of the disc and be massive enough to open a gap in the gas, resulting in the ring and gap structure.

Sahl Rowther adds: “This is exciting given the unknowns associated with the masses of observed discs. If massive discs with ring and gap structures are common, it could provide more pathways in explaining disc architectures.

“Our results suggest that it may even be possible to see signs of these giant planets, given the right conditions and technology. The next stage of our research will be to determine what those conditions are, to help astronomers in trying to determine the presence of these planets.”

Dr. Meru adds: “It’s quite possible for that spiral structure to be wiped out, don’t be fooled when you look at a disc. It could still be reasonably massive, it’s just that a giant planet has caused it to lose its spirals.

“We have these amazing images of protoplanetary discs and what’s really exciting about them is their structure. In the past few years telescopes have become very powerful and we’re able to see features like gaps and rings. With computer simulations like ours, we can now try to understand if some of the processes that we expect to happen, like planets migrating in young discs, can lead to the kind of images that observers are seeing. This is possible with the combination of powerful telescopes and supercomputers.”