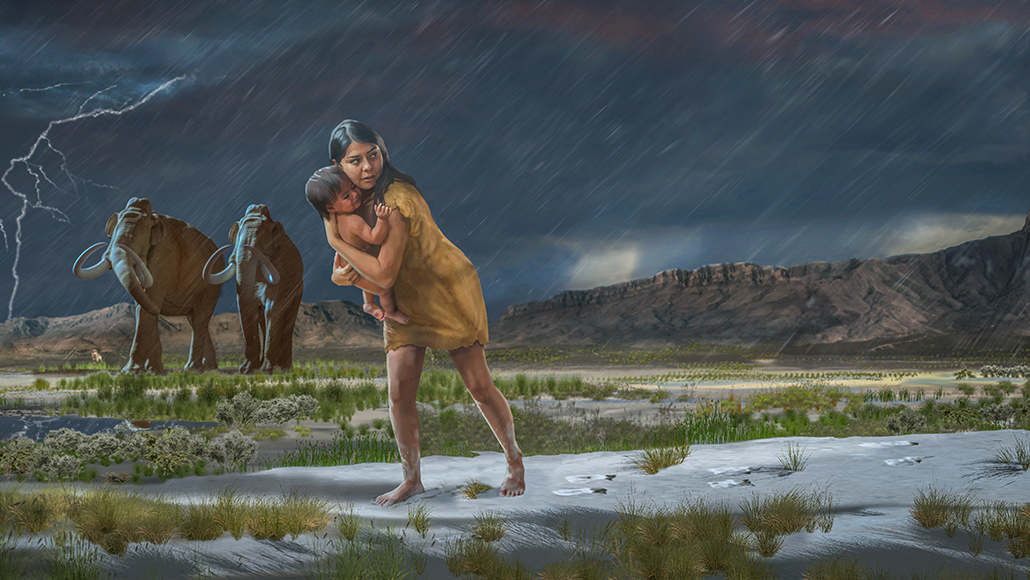 On a day during the late Ice Age, a young adult or teen carrying a toddler hustled across a muddy flat where mammoths and giant sloths roamed. Now, over 10,000 years later, fossilized footprints reveal that possibly perilous journey.

The tracks, found in New Mexico’s White Sands National Park, stretch for nearly 1.5 kilometers across the plain and back, making them the longest set ever found, researchers report in the Dec. 1 Quaternary Science Reviews.

“The length of the trackway is really exceptional and give us a prolonged window into the behavior of the individuals,” says evolutionary biologist Kevin Hatala of Chatham University in Pittsburgh, who was not involved in the research. It evokes a personal and intimate connection with our ancestors, as many people today can relate to the feeling of holding a child in their arms, he says.

Scientists stumbled across the find when, in 2018, they spied a continuous stretch of dark spots along what was once the shore of the ancient Lake Otero, now dried up. A little digging revealed fossilized human footprints as well as those from a mammoth and ground sloth.

Of the 427 human footprints discovered, researchers analyzed 90. The size and the depth of the footprints suggest that they had been made by a teen or a young woman, the researchers say. Uneven prints hint that the surface was slippery and that on one leg of the journey, the person at times shifted a heavy load. That load appeared to be a child: Smaller prints from perhaps a 3-year-old appeared next to the larger footprints in several spots.

That hurry might have been due to the riskiness of the journey. Previously found footprints from the area came from groups of people (SN: 4/25/18). They likely moved in groups to safely hunt animals such as mammoths, sloths and wolves, Bustos says.

While it is unclear if the mammoth sensed the human presence, the giant ground sloth rose onto its hind legs and moved in circles, suggesting that it knew that there was a human nearby, the researchers say. It’s possible that such animals were coming in contact with humans on a regular basis, Hatala says.