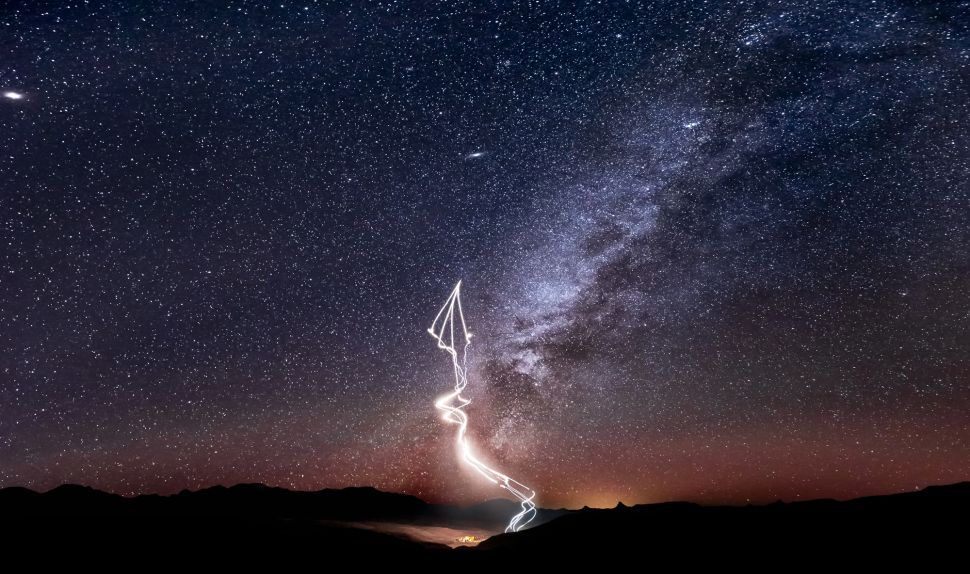 The winter solstice is here, bringing with it the longest night of the year, making it a great time to look up and gaze at the wonder of the universe.

Red Bull’s skydiving team celebrated the night sky, and the mysterious Marfa lights of a Texas town, in an epic recent nighttime skydive by the Red Bull Air Force’s Amy Chmelecki and teammates to highlight — literally (they used pyrotechnics) — the importance of astronomy and dark skies in a rural region of Texas. You can watch the video here on Red Bull’s YouTube, which features photography by Dustin Snipes.

The 44-year-old Chmelecki jumped at an altitude of 15,000 feet (4.5 km) for a four-minute fall with other skydivers, lighting the sky with pyrotechnics carefully strapped to their boots.

The skies in Marfa — a town 5,000 feet (1,500 meters) in altitude roughly 2.5 hours southeast of El Paso — were so dark that it presented an additional challenge for the highly experienced skydiver. Only a single car with headlights illuminated the ground so as not to ruin the high-definition video and pictures that Red Bull created for the multi-jump event in November, Chmelecki told Space.com.

Red Bull Air Force Captain Jon DeVore led Chmelecki’s team in the challenging nighttime jumps; each team member has more than 20,000 jumps of experience, Chmelecki said. “It was easier than I thought,” added Chmelecki, who has been skydiving herself for 26 years. “But it really is scary, and there is not much room for error. You and the team have to be highly experienced.”

The footage was released publicly in time for the winter solstice on Monday (Dec. 21), when Jupiter and Saturn will be closer to each other in the sky than they have been for 400 years.

Red Bull Air Force is known for taking challenging jumps for astronomy, such as the March 2019 jump to showcase the supermoon in the sky. The November jump in Marfa highlighted the region’s efforts to become an International Dark-Sky Association preserve (IDA), following commitments from the community to limit lighting and from nearby oil and gas industry to reduce overnight lights.

Dark sky preserves are a boon for astronomical research, which depends on a minimum of artificial lighting for observations; in this case, Marfa is only 20 minutes away from the McDonald Observatory in Fort Davis, Texas. The observatory is affiliated with professional astronomy research from the University of Texas at Austin, and hosts a visitors’ center for outreach.

“I think it’s a great way to reach an audience we don’t normally reach,” IDA director of engagement Bettymaya Foott told Space.com of the Red Bull jump, which Foott said would likely attract a younger and perhaps teenaged audience. “One of the biggest problems is night sky awareness and advocacy is people don’t know what a dark sky is.”

IDA will weigh the reaction to the Red Bull campaign before making further plans to attract youth to dark sky preservation, Foott said, but she said there is already a more general uptick in interest across all age groups due to the pandemic.

Small astronomy tours still allow for safe social distancing outdoors while looking at the sky, she said, and astrotourists are a benefit to small towns such as Marfa because these people do need to stay overnight — adding lucrative dinnertime spending and hotel rooms to a typical visit.

Red Bull Air Force used the vast valley to its advantage to capture stunning video and photo footage. Photographer Dustin Snipes from Red Bull was on the other side of the valley working to fire several cameras at once, capturing the streams of skydiving light across the sky.

“We had two cameras set up to a computer that were showing live views so we could see a better outcome of what it [the shot] would look like right away,” Snipes said in a Red Bull interview provided to media (Snipes was unavailable for a Space.com interview before deadline.)

“Then we had six more [cameras] … shooting a really wide angle, something that we could show more stars and resolution,” Snipes added. “Those were also wired together so they’d trigger at the same time from one button. While I was doing that, I was looking through another camera and triggering every 25 seconds for the actual array shot. Then, while I was shooting, we set up a script to shoot two cameras off to the left with a slightly different angle and focus.”

While synchronizing with the other jumpers to create the light show, Chmelecki said it was an odd experience to only see lights from the other skydivers. Usually there are city lights below to help the Red Bull jumpers aim for a safe landing, she said.

“Jumping into dark is a really surreal feeling; one of your senses is almost taken away,” she added. “You’re operating in a different realm. It’s a different feeling.”

Much like an astronaut or test pilot, the Red Bull jumpers have extensive training and many discussions about safety before going on a flight. An additional layer of protection was added for the ongoing COVID-19 pandemic, with each jumper wearing a mask over their mouths until just before leaving the plane; per new skydiving procedures established by industry, each jumper tucked the mask in their helmet so it wouldn’t whip away in mid-air.

Chmelecki urged young skydivers looking to follow in her footsteps to do what they could to gain experience, through accumulating jumps and certifications. Skydiving is an expensive sport and at times, Chmelecki worked three jobs to support her hobby before joining Red Bull full-time eight years ago. A typical great starting job for a young skydiver these days is a wind tunnel, an option not available to Chmelecki in the 1990s — but a job she said she would take if she were to start all over again.

“What we’re doing is accumulating experience,” Chmelecki said of the path to becoming a professional skydiver. “I started slowly. I spent all my money on skydives, and then picked up sponsors when I was getting good. Also, people would ask me to coach them. Eventually it just kept growing from there.”