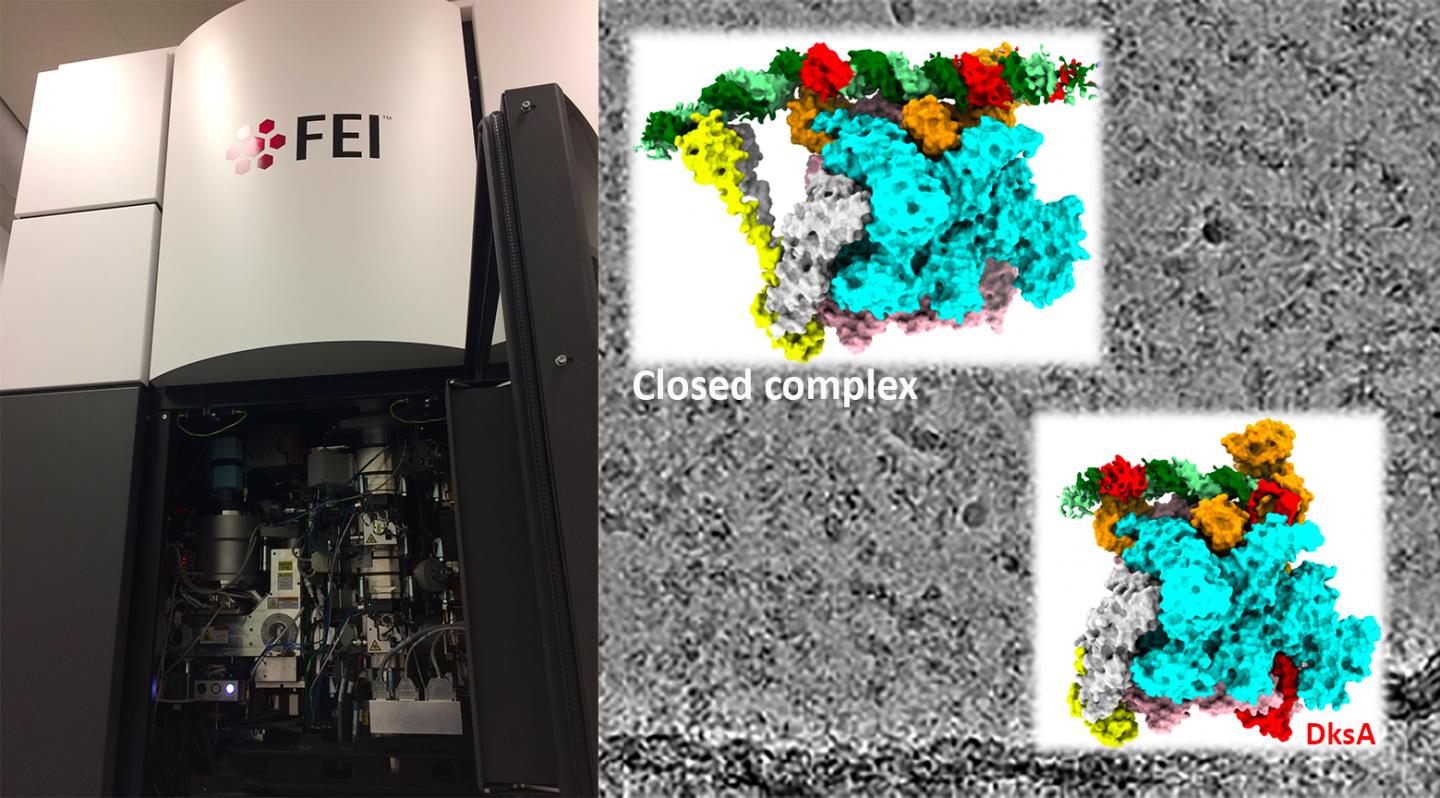 The enzyme that makes RNA from a DNA template is altered to slow the production of ribosomal RNA (rRNA), the most abundant type of RNA within cells, when resources are scarce and the bacteria Escherichia coli needs to slow its growth. Researchers used cryo-electron microscopy (cryo-EM) to capture the structures of the RNA polymerase while in complex with DNA and showed how its activity is changed in response to poor-growth conditions. A paper describing the research led by Penn State scientists appears January 22, 2020 in the journal Nature Communications.

“RNA polymerase is an enzyme that produces a variety of RNAs using information encoded in DNA,” said Katsuhiko Murakami, professor of biochemistry and molecular biology at Penn State and the leader of the research team. “This is one of the key steps in the central dogma of molecular biology: transferring genetic information from DNA to RNA, which in turn often codes for protein. It’s required for life and the process is basically shared from bacteria to humans. We are interested in understanding how the structure of RNA polymerase is changed for modulating its activity and function, but it’s been difficult to capture using traditional methods like X-ray crystallography, which requires crystallizing a sample to determine its structure.”

RNA polymerase functions by binding to specific DNA sequences called “promoters” found near the beginning of genes that are going to be made into RNA. To understand the structure and function of the polymerase during this interaction, researchers need to capture the polymerase while it is bound to the promoter DNA, but the interaction can be very unstable at some promoters. Crystallography can only capture RNA polymerase bound to a promoter if the complex is very stable, but for ribosomal RNA promoters this interaction tends to be unstable so that the polymerase can quickly escape to begin making the RNA. To see these interactions the researchers turned to cryo-EM, a method that allows them to visualize the structure of macromolecules in solution.

“When you talk about RNA, most people think about messenger RNA (mRNA), which is the template for making proteins,” said Murakami. “But the most abundant type of RNA in cells doesn’t actually code for protein. Ribosomal RNA is the major structural component of the ribosome, which is the cellular machinery that builds proteins using messenger RNAs as templates. Ribosomal RNA synthesis accounts for up to 70 percent of total RNA synthesis in E. coli cells.”

When a cell divides, which E. coli can do every twenty minutes in nutrient-rich growth conditions, it needs to provide the two resulting daughter cells with enough ribosomes to function, so it is continually making ribosomal RNAs.

“If you do some back-of-the-envelope calculations, an E. coli cell needs to make around 70,000 ribosomes every 20 minutes,” said Murakami. “This means RNA polymerase starts ribosomal RNA synthesis every 1.7 seconds from each ribosomal RNA promoter. So, the polymerase has to bind the ribosomal RNA promoter transiently in order to quickly move onto the ribosomal RNA synthesis step. This is not an ideal for a crystallographic approach, but in a cryo-EM study, we could capture this interaction and, in fact, see different several stages of the interaction in a single sample.”

The researchers were able to determine the three-dimensional structures of the RNA polymerase-promoter complex at two different stages. One when the DNA was still “closed,” before the two strands of the DNA molecule are separated allowing access to the template strand (they refer to this as a closed complex), and one when the DNA was “open” (called an open complex) and primed for RNA synthesis to begin.

“We found a large conformational change in part of the polymerase called the ? (sigma) factor when it binds to promoter DNA, which has never been observed before” said Murakami. “This change opens a gate that allows the DNA to enter a cleft in the polymerase and form the open complex quickly.”

When E. coli needs to slow its growth due to limited resources, two molecules–a global transcription regulator called DksA and a bacterial signaling molecule called ppGpp, bind directly with the polymerase to reduce production of ribosomal RNA. The research team investigated how the binding of these two factors alters the conformation of the polymerase and affects its activity in a promoter-specific manner.

“DksA and ppGpp binding to the polymerase alters its conformation, which prevents the opening of a gate and therefor the polymerase has to follow an alternative pathway to form the open complex,” said Murakami. “This is not an ideal pathway for the ribosomal RNA promoter and thus slow its activity. It’s exciting to see these conformational changes to the polymerase that have direct functional consequences. We couldn’t do this without the cryo-EM, so I’m very thankful to have access to this technology here at Penn State for optimizing experimental conditions for preparing cryo-EM specimens before sending them to the National Cryo-EM Facility at NCI/NIH for high-resolution data collections. We are going to be able to continue to analyze cellular components and complexes that were previously inaccessible.”

In addition to Murakami, the research team includes Yeonoh Shin and M. Zuhaib Qayyum at Penn State and Danil Pupov, Daria Esyunina, and Andrey Kulbachinskiy at the Russian Academy of Sciences. The research was funded by the U.S. National Institutes of Health, the Russian Science Foundation, and the Russian Foundation for Basic Research. Additional support was provided by the National Cancer Institute’s National Cryo-EM Facility at the Frederick National Laboratory for Cancer Research.