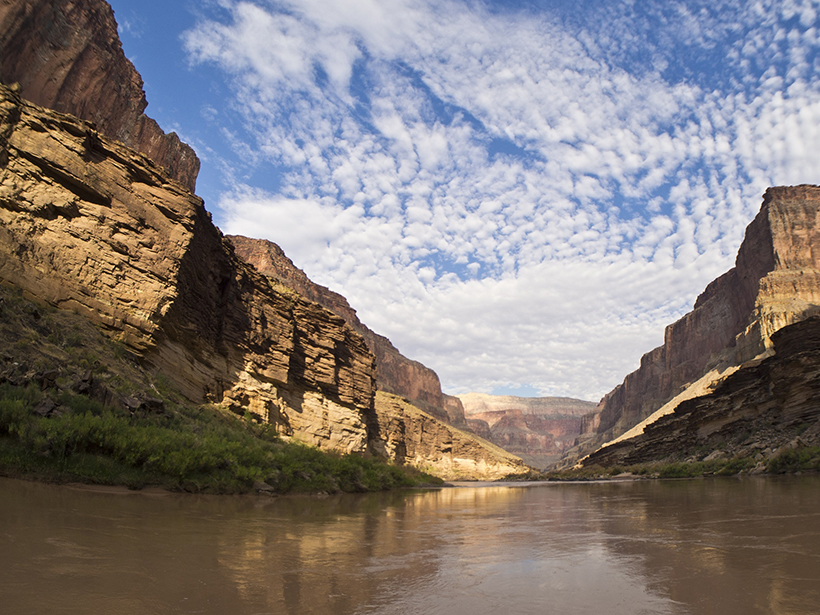 Intersecting events such as major floods, decades-long megadroughts, and economic or governance upheavals could have catastrophic effects on the water supply for the 40 million people.

Story lines like this keep water management professionals, environmentalists, and government representatives awake at night. Intersecting events such as major floods, decades-long megadroughts, and economic or governance upheavals could have catastrophic effects on the water supply for the 40 million people who live in the southwestern United States and northwestern Mexico. New guidelines for managing the Colorado River’s largest reservoirs are on track to be negotiated over the next few years, adding urgency to efforts to reimagine water management strategies in this region. In the context of a decades-long drought and now a global pandemic, preparing for the possibility of extreme events is an obvious next step.

Over the past 3 years, the Center for Climate Adaptation Science and Solutions (CCASS) at the University of Arizona has hosted three interdisciplinary conferences as well as a three-phase scenario planning process to discuss a range of science and policy topics related to managing the river under a broader Colorado River Conversations (CRC) initiative. CRC promotes integration of the latest social and physical science knowledge into the management of the Colorado River and is providing an informal scientific foundation for the pending renegotation of the Colorado River management guidelines.

At the first conference, in 2017, attendees explored data and tools already available that may not be commonly used by water managers, and they identified important gaps in the relevant social and physical science foundation for decisionmaking. This event was followed in 2018 by discussions with water managers, who suggested specific science priorities to be pursued. In October 2019, more than 100 residents of the Colorado River basin met to share their perspectives about problems and opportunities in the basin and to generate innovative suggestions for paths forward.

Having set the stage in the science conferences, organizers of the CRC scenario planning process encouraged participants collectively to consider for the first time the potential for extreme climate events to occur synchronously with major collapses in governance or the economy or with other “extremes.” Over the course of two in-person multiday scenario planning workshop sessions in June and October 2019, we built basin-wide story lines around such calamitous intersections, then discussed the resulting cascade of climate, ecosystem, social, and other impacts.

After the onset of the COVID-19 pandemic, the project quickly shifted from a theoretical discussion to a real-time conversation about responding to unexpected and high-impact events. We canceled the in-person version of our third scenario planning workshop in April of this year because of pandemic-related limitations and instead hosted the event on Zoom, with facilitated breakout sessions, participant voting, and a dialogue about “low-regret” (relatively low risk) solutions. Despite the magnitudes of the extreme events discussed, participants identified a surprisingly wide array of preemptive mitigation options to address potentially devastating intersections of social and physical extreme events.

Renegotiation of the current guidelines, the Colorado River Interim Guidelines for Lower Basin Shortages and Coordinated Operations for Lake Powell and Lake Mead, must be complete by 2026. As one participant noted during the CRC scenario planning process, this renegotiation could be as important to water management in the West as the 1922 Colorado Compact among the seven U.S. states in the Colorado River basin.

This kind of reimagining requires looking outside current legal and policy frameworks and considering different ways for people to relate to the river, and to each other, especially in a future of diminished water supplies.

The CRC meetings have established a neutral space for scientists, water managers, representatives from nongovernmental organizations, and government officials to talk about issues beyond the operational criteria for reservoir management. Conversations identified gaps in scientific knowledge, including groundwater interactions, ecosystem structure and function, sediment management, power production trade-offs, and others, as well as discussions of “nightmare” scenarios. In addition, participants have discussed a range of ideas to promote management of the Colorado River as an ecological and social system beyond its role as a water delivery system. This kind of reimagining requires looking outside current legal and policy frameworks and considering different ways for people to relate to the river, and to each other, especially in a future of diminished water supplies.

The overall objective of our effort is to bring systems-based science to bear on a broader set of management objectives for the river. We also aim to facilitate open conversations about environmental flows, cultural practices, improving survival of native species, and maintenance of power production and recreational activities along the river. The Colorado will certainly continue to be a highly managed river serving many users, including those in the largest cities and irrigation districts in the Southwest, but there is clearly interest in thinking about new paradigms.

The scenario planning component of this project has explored implications of low-probability, high-impact events that are difficult to discuss in public arenas because of concerns about alarming people. We were surprised by the number of nightmare scenarios, like the aquifer depletion sequence described above, that participants suggested. They also identified approximately 35 drivers of these scenarios and sorted these drivers into categories: climatic, governance, ecological, legal, economic, social, and physical.

Using these categories, workshop participants developed 3D matrices depicting multiple intersecting drivers, with each axis representing opposite ends of a spectrum of impacts. These combinations of drivers served as the basis for eight realistic, science-based story lines and narrative descriptions of the future. In each matrix, climate-related events or drivers of impacts, such as the following examples, were included on one or more axes (see vertical axis in Figure 1):

Two other categories involving potential drivers of extreme events (for example, loss of governance capacity and economic disasters) were selected for the other axes. In some story lines, axes included positive outcomes (e.g., a move toward regionally grown food improving the agricultural economy) in addition to one or more extreme event that would potentially “break” the system (e.g., a major dam failure; Figure 1).

During the second workshop, participants discussed the cascades of impacts (e.g., heat waves, forest fires, and reservoir sedimentation) that could occur in each of the eight story lines. Then, during the third workshop, we condensed the eight story lines into four—named “Caught Off Guard,” “Social Shifts,” “Disaster Strikes,” and “Dig it Deeper” (Figure 2)—and further discussed their associated impacts to uncover strategies that could mitigate damages associated with these intersecting conditions.

Participants identified a broad array of solutions, many of which would mitigate risks in multiple story lines, that we grouped into four categories:

Informed by the circumstances of the COVID-19 pandemic as well as by their own experiences, participants agreed that more flexible approaches for the management of the Colorado River would help build a safety net of solutions. In addition, when considering alternatives for management, there must be more focus on and innovation in considering implications for equity among communities relying on the Colorado (especially with respect to vulnerable populations and tribal interests) and in considering potential unintended consequences.

A Deeper Understanding and Creative Solutions

Participants in the CRC Project explored, for the first time, the potential implications of multiple failure points and extreme conditions intersecting to disrupt management of the Colorado River. This process led to a deeper understanding of the river system and its environs, as well as the risks facing tens of millions of people across an already water strapped region. It also led to discussions about creative solutions and helped participants from different professional and personal backgrounds understand new perspectives. Importantly, the meetings also created space for people who have historically felt excluded from river management to bring their perspectives to the conversation.

Enthusiasm about the CRC experience suggests that universities can play a role in developing, holding, and supporting spaces for new, boundary-spanning conversations that help reimagine the future of the Colorado River. It also illustrates the potential for this flexible scenario planning approach to inform decision processes across other contexts and regions.