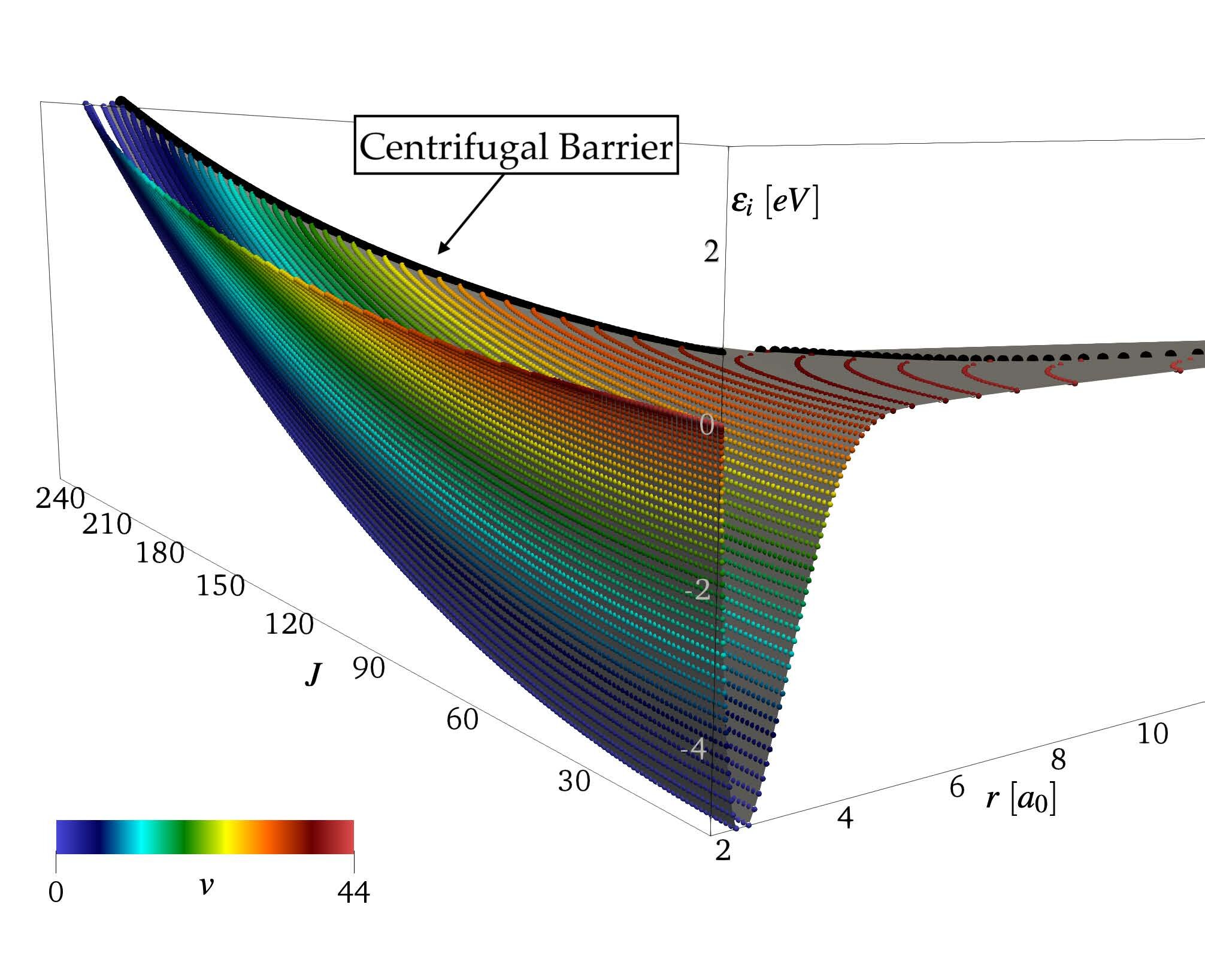 Hypersonic flight is conventionally referred to as the ability to fly at speeds significantly faster than the speed of sound and presents an extraordinary set of technical challenges. As an example, when a space capsule re-enters Earth’s atmosphere, it reaches hypersonic speeds—more than five times the speed of sound—and generates temperatures over 4,000 degrees Fahrenheit on its exterior surface. Designing a thermal protection system to keep astronauts and cargo safe requires an understanding at the molecular level of the complicated physics going on in the gas that flows around the vehicle.

Recent research at the University of Illinois Urbana-Champaign added new knowledge about the physical phenomena that occur as atoms vibrate, rotate, and collide in this extreme environment.

“Due to the relative velocity of the flow surrounding the vehicle, a shock is formed in front of the capsule. When the gas molecules cross the shock, some of their properties change almost instantaneously. Instead, others don’t have enough time to adjust to the abrupt changes, and they don’t reach their equilibrium values before arriving at the surface of the vehicle. The layer between the shock and heat shield is then found in nonequilibrium. There is a lot that we don’t understand yet about the reactions that happen in this type of flow,” said Simone Venturi. He is a graduate student studying with Marco Panesi in the Department of Aerospace Engineering at UIUC.

Venturi explained that they cannot describe the flow in the same way as a compressible flow in lower speed aerodynamics, which looks at the flow’s bulk properties. Hypersonic flows are studied at the microscopic level to understand how the molecules and atoms interact and, ultimately, how to model these interactions.

“The problem is complicated even further by the number of phenomena that occur simultaneously—nonequilibrium is only one of them,” Venturi said. “Radiation, for example, is a consequence of the excited electronic states. At the same time, the flow interacts with the gases resulting from the ablation of the capsule surface.”

The research looked at nonequilibrium from the perspective of vibration and rotation of the molecules in the flow around the vehicle, or rovibrations, a word commonly used in the study of hypersonics and quantum physics.

“The input to our simulations comes from the first principles of Quantum physics. We consider the atoms at a set of relative distances, and we compute the resulting interaction energies by solving the Schrödinger equation,” Venturi said. “The solution comes only at a discrete set of points. Machine learning helps us in fitting and producing a continuous surface—what we call the potential energy surface.”

In the past years, researchers started to look at neural networks for generating surface between these points.

“We added a further level of complexity by extending the neural networks via probabilistic machine learning,” Venturi said. “This not only allows us to describe the atomic interactions more accurately, but it also quantifies the uncertainty that affects these objects. We created a distribution of surfaces, instead of just one surface, because the prediction that comes out from these models is not just a single value, but a distribution of values. So, it’s prediction with uncertainty around the value. The result is not an exact answer, but a distribution of answers.”

Venturi said after they represented the interaction energy between molecules and atoms, they simulated billions of collisions.

“We know what happens at a small set of spatial points, and then we use the equation of classical mechanics. The equations are the same that govern billiard balls colliding. The difference is that we use these interactions, these quantum interactions, as driving forces. This complication is required by the atomic scale of the problem, as the particles can feel each other even when they are distant. With a huge number of collisions, we can obtain the probability that certain reactions will happen. We use these probabilities of reaction in computational fluid dynamics with the ultimate goal of predicting the fluxes and designing safer heat shields,” he said.

In the second research project, Venturi said they now know more about the disassociation dynamics in hypersonic flows, that is, how the molecules break their bonds and become two separate atoms as a consequence of strong collisions.

“The extreme temperatures of hypersonic regimes generate very peculiar physics,” Venturi said. “The make it impossible to distinguish between vibrations and rotations of the molecules. You cannot split them because they are highly coupled together. We found that this effect has important consequences of the dissociation mechanisms.

“It is interesting, not just from a chemistry perspective, but also from an engineering point of view. The chemical reactions that take place after the gas molecules and atoms collide either release energy into the flow or subtract energy from it,” Venturi said. “So, if we want to quantify the heat flux that impinges the heat shield, we need to predict how much energy is stored in the flow around the vehicle. The dissociation of the molecules in the atmosphere isn’t something we commonly observe at room temperature. It starts to be relevant only at temperatures over 4,500 degrees Fahrenheit for oxygen and 7,000 degrees Fahrenheit for nitrogen. It’s an interesting phenomenon, and now we understand more about it.”

The two articles were recognized with cover pages of The Journal of Physical Chemistry. Simone Venturi, a doctoral student with Marco Panesi in the Department of Aerospace Engineering and CHESS, leverages Machine Learning and Data Science to study chemistry in hypersonic environments.