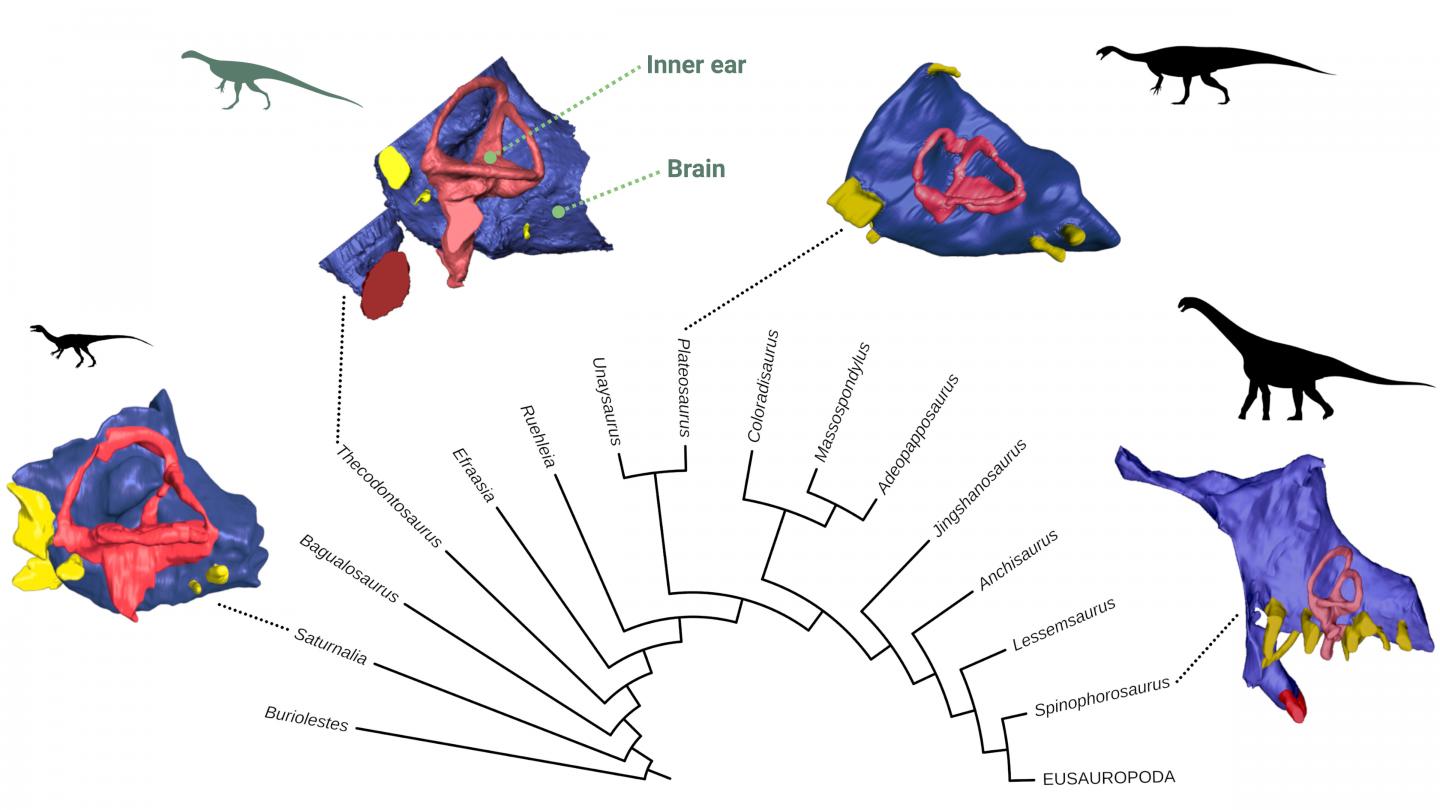 A pioneering reconstruction of the brain belonging to one of the earliest dinosaurs to roam the Earth has shed new light on its possible diet and ability to move fast.

Research, led by the University of Bristol, used advanced imaging and 3-D modelling techniques to digitally rebuild the brain of Thecodontosaurus, better known as the Bristol dinosaur due to its origins in the UK city. The palaeontologists found Thecodontosaurus may have eaten meat, unlike its giant long-necked later relatives including Diplodocus and Brontosaurus, which only fed on plants.

Antonio Ballell, lead author of the study published today in Zoological Journal of the Linnean Society, said: “Our analysis of Thecodontosaurus’ brain uncovered many fascinating features, some of which were quite surprising. Whereas its later relatives moved around ponderously on all fours, our findings suggest this species may have walked on two legs and been occasionally carnivorous.”

Thecodontosaurus lived in the late Triassic age some 205 million years ago and was the size of a large dog. Although its fossils were discovered in the 1800s, many of which are carefully preserved at the University of Bristol, scientists have only very recently been able to deploy imaging software to extract new information without destroying them. 3-D models were generated from CT scans by digitally extracting the bone from the rock, identifying anatomical details about its brain and inner ear previously unseen in the fossil.

“Even though the actual brain is long gone, the software allows us to recreate brain and inner ear shape via the dimensions of the cavities left behind. The braincase of Thecodontosaurus is beautifully preserved so we compared it to other dinosaurs, identifying common features and some that are specific to Thecodontosaurus,” Antonio said. “Its brain cast even showed the detail of the floccular lobes, located at the back of the brain, which are important for balance. Their large size indicate it was bipedal. This structure is also associated with the control of balance and eye and neck movements, suggesting Thecodontosaurus was relatively agile and could keep a stable gaze while moving fast.”

Although Thecodontosaurus is known for being relatively small and agile, its diet has been debated.

Antonio, a PhD student at the University of Bristol’s School of Earth Sciences, said: “Our analysis showed parts of the brain associated with keeping the head stable and eyes and gaze steady during movement were well-developed. This could also mean Thecodontosaurus could occasionally catch prey, although its tooth morphology suggests plants were the main component of its diet. It’s possible it adopted omnivorous habits.”

The researchers were also able to reconstruct the inner ears, allowing them estimate how well it could hear compared to other dinosaurs. Its hearing frequency was relatively high, pointing towards some sort of social complexity – an ability to recognise varied squeaks and honks from different animals.

Professor Mike Benton, study co-author, said: “It’s great to see how new technologies are allowing us to find out even more about how this little dinosaur lived more than 200 million years ago.

“We began working on Thecodontosaurus in 1990, and it is the emblem of the Bristol Dinosaur Project, an educational outreach scheme where students go to speak about science in local schools. We’re very fortunate to have so many well-preserved fossils of such an important dinosaur here in Bristol. This has helped us understand many aspects of the biology of Thecodontosaurus, but there are still many questions about this species yet to be explored.”

This research was funded by the Natural Environment Research Council (NERC), the Leverhulme Trust and the Royal Society.