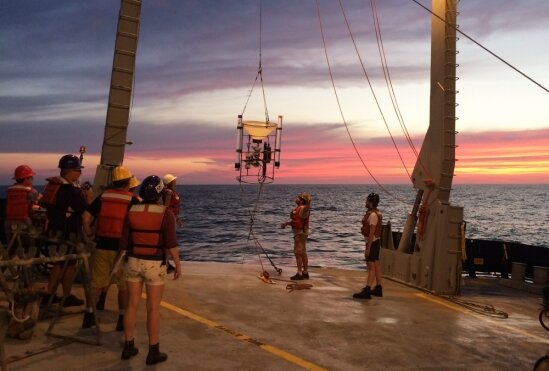 With no dissolved oxygen to sustain animals or plants, ocean anoxic zones are areas where only microbes suited to the environment can live.

“You don’t get big fish,” said UC Santa Barbara biogeochemist Morgan Raven. “You don’t even get charismatic zooplankton.” But although anoxic oceans may seem alien to organisms like ourselves that breathe oxygen, they’re full of life, she said.

These strange ecosystems are expanding, thanks to climate change—a development that is of concern for fisheries and anyone who relies on oxygen-rich oceans. But what piques Raven’s interest is the changing chemistry of the oceans—the Earth’s largest carbon sink—and how it could move carbon from the atmosphere to long-term reservoirs like rocks.

“What happens to our carbon cycle as we get these large areas of the ocean that are oxygen-free?” she said. This question was central to research conducted by Raven and colleagues Rick Keil (University of Washington) and Samuel Webb (Stanford Linear Accelerator Laboratory) in a paper published in the journal Science.

In oxygen-rich oceans, carbon is moved around largely by food web processes that begin with carbon dioxide-fixing phytoplankton that photosynthesize at the water’s surface.

“Most of the time they just get eaten by zooplankton,” Raven said. But if they aren’t eaten by larger animals, they head to the depths where they respire carbon dioxide and excrete organic carbon.

“It’s like a spinning wheel—CO2 goes to plankton, goes to CO2,” Raven said.

In the absence of zooplankton and fish, however, more of the sinking organic carbon can survive and be deposited at depth, she said. In fact, sediments under these anoxic zones generally have more organic carbon deposits than their oxygen-rich counterparts. But, according to the researchers, we lack a “full mechanistic understanding” of how this occurs.

The team did have a clue in the form of a hypothesis formed about a decade ago by University of Southern Denmark geologist Don Canfield and colleagues.

“They put out this idea that maybe inside of these zones, microbes are still eating organic carbon, but respiring sulfate,” Raven said. Called “cryptic sulfur cycling,” the idea was somewhat difficult to accept largely because the products of this microbial sulfate reduction (MSR) were difficult to detect, and because other compounds in the area, such as nitrates, were more energetically favorable to metabolize.

However, according to the study, “there is emerging molecular and geochemical evidence that suggests MSR may occur in (oxygen-deficient zones) despite plentiful dissolved nitrate.”

The researchers tested whether this enigmatic process might be hiding inside of large (>1mm), fast-sinking organic particles by collecting particles from the Eastern Tropical North Pacific oxygen-deficient zone, roughly located off the northwestern coast of Mexico.

“It really is just this polymeric, sticky stuff,” Raven said of the aggregations of mostly dead phytoplankton, fecal matter, other small organisms and bits of sand and clay that get glued together in a “fluffy” matrix. Collection of these particles is itself an accomplishment for researchers combing the vast oceans for relatively small, diffuse particles.

“My colleagues from the University of Washington had this collection device that was really the thing that made it possible to do this,” she said. The collected particles were sent to the Stanford Synchotron Radiation Lightsource for analysis.

Results of the analysis, such as evidence of the production of organic sulfur within the samples, demonstrate what Raven calls a “pickling” of the dead phytoplankton, as they sink through the anoxic area.

“Phytoplankton grow in the surface ocean, but due to gravity, they sink,” she said. As they fall through the anoxic region, these organic aggregates undergo sulfurization, which has the effect of shielding the carbon at their core from enzymes or other substances that would otherwise wear them away.

“Even when it gets to the sediment, bacteria there can’t eat these organic particles,” noted Raven. And just like the pickles we know and love, the preservation process makes the organic particle resistant to bacteria, she said, which could explain why more organic carbon is found in the sediments below anoxic ocean zones.

“It’s the same process that can also make petroleum,” she said, pointing out that where oilbeds are found, so, too, is sulfur. This process may have been widespread during the Cretaceous period (145.5 to 65.5 million years ago), when the Earth was consistently tropical and the ocean was subject to geologic and mass extinction events that resulted in the burial of massive amounts of carbon, and anoxic waters throughout the Atlantic.

“What we didn’t know is whether this was also going on in these less extreme modern environments,” Raven said.

What remains to be seen is how these growing oxygen depleted zones will interact with climate change.

“Potentially as these zones expand, there could be a negative feedback—more CO2 in the atmosphere makes higher temperatures, which makes these zones bigger,” Raven said. “These bigger zones then trap more CO2 and put it in the sediment and rocks.” This feedback might help the Earth balance its carbon cycle over time, she said, “but we need to know how this connects to everything else.”

Faster than we thought—sulfurization of organic material