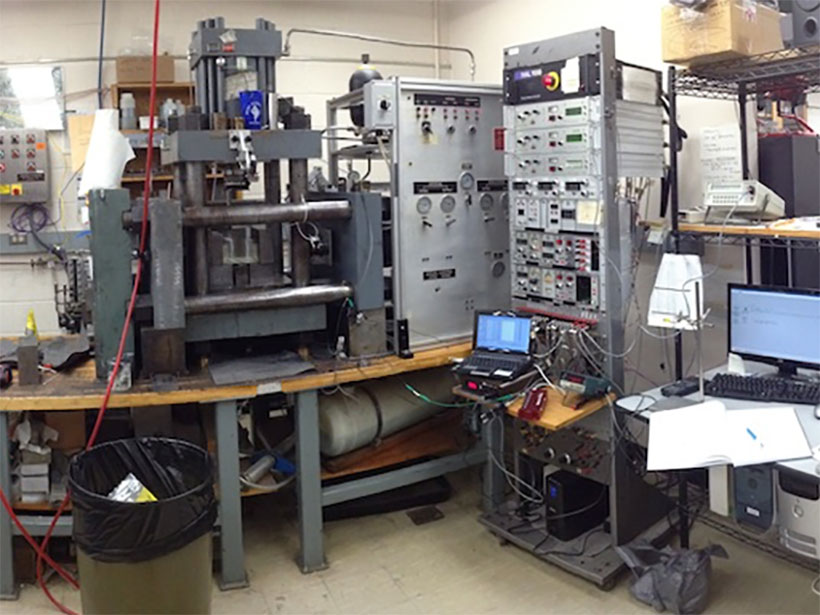 Scientists have produced the first laboratory examples of glacier seismicity, or icequakes, according to new research. Results from these first icequake experiments by Zoet et al. suggest that interactions between glacier ice and the bedrock below mimic the interactions of rocks on faults that cause earthquakes. The new experimental approach helps researchers better understand natural glacial processes, like the flow of ice into the ocean, which can accelerate sea level rise, according to the authors.

“If we’d had a little seismometer on there, we probably would have seen the same types of things you see on seismometers placed on a real glacier,” said Luke Zoet, a glaciologist at the University of Wisconsin–Madison and lead author of the new research. The results were published in AGU’s journal Geophysical Research Letters.

The movement of ice sheets and glaciers over underlying bedrock resembles that of tectonic plates rubbing against each another. Just as the latter can produce earthquakes, glacial movement can result in seismic activity known as icequakes. Field glaciologists have previously measured icequakes by placing seismometers on glaciers’ surfaces, but what’s happening at the interface of ice and rock, potentially kilometers beneath the ice surface, is still unclear.

The mystery piqued Zoet’s curiosity. He and his colleagues brought their investigations into the laboratory and used a benchtop machine, about the size of two oven ranges sitting side by side, that presses a block of debris-laden ice against a block of granite with 500 kilopascals of force, mimicking the weight of a glacier on a glacial bed. To simulate glacial movement, another piston slowly pushed the ice block, so it scraped along the rocky surface at speeds consistent with fast moving glaciers, from 10 micrometers per second to up to 100 micrometers per second.

At higher speeds, the researchers found that the ice didn’t move smoothly. Instead, there were moments when the ice stuck to the granite and then lurched forward. These stick-slip movements, which also cause earthquakes, were consistent with measurements of icequakes by seismometers on real glaciers. The artificial icequakes even produced sound. “You can audibly hear it,” Zoet said.

The laboratory icequakes occurred under conditions of friction similar to those that govern tectonic plate movements and earthquakes, suggesting the glacier-rock interface doesn’t just look like a tectonic fault; it behaves like one too. The new research supports the idea that seismometers can help scientists understand glacier movement. “[The paper] really lets us go forward now with interpreting these results in a much more rigorous and robust way,” said Paul Winberry, a glaciologist at Central Washington University in Ellensburg who was not involved in the work.

Future experiments will explore whether other conditions, such as a soft rather than hard glacier bed, also produce icequakes in the lab. The findings will help ice sheet scientists make more accurate predictions of glacier flow into the ocean and could inform future forecasts of rising sea levels. (Geophysical Research Letters, https://doi.org/10.1029/2020GL088964, 2020)