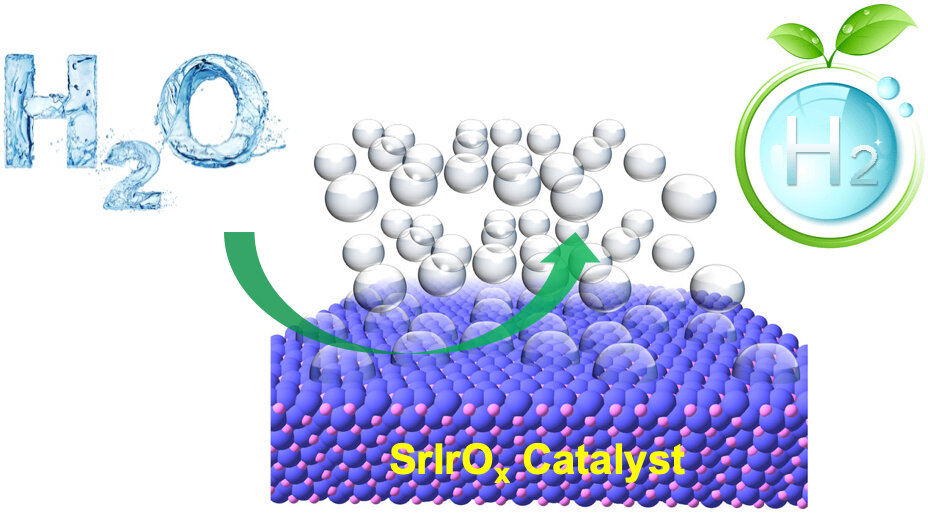 Efficiently mass-producing hydrogen from water is closer to becoming a reality thanks to Oregon State University College of Engineering researchers and collaborators at Cornell University and the Argonne National Laboratory.

Hydrogen is found in a wide range of compounds on Earth, most commonly combining with oxygen to make water, and it has many scientific, industrial and energy-related roles. It also occurs in the form of hydrocarbons, compounds consisting of hydrogen and carbon such as methane, the primary component of natural gas.

“The production of hydrogen is important for many aspects of our life, such as fuel cells for cars and the manufacture of many useful chemicals such as ammonia,” said Oregon State’s Zhenxing Feng, a chemical engineering professor who led the study. “It’s also used in the refining of metals, for producing man-made materials such as plastics and for a range of other purposes.”

According to the Department of Energy, the United States produces most of its hydrogen from a methane source such as natural gas via a technique known as steam-methane reforming. The process involves subjecting methane to pressurized steam in the presence of a catalyst, creating a reaction that produces hydrogen and carbon monoxide, as well as a small amount of carbon dioxide.

The next step is referred to as the water-gas shift reaction in which the carbon monoxide and steam are reacted via a different catalyst, making carbon dioxide and additional hydrogen. In the last step, pressure-swing adsorption, carbon dioxide and other impurities are removed, leaving behind pure hydrogen.

“Compared to natural gas reforming, the use of electricity from renewable sources to split water for hydrogen is cleaner and more sustainable,” Feng said. “However, the efficiency of water-splitting is low, mainly due to the high overpotential—the difference between the actual potential and the theoretical potential of an electrochemical reaction—of one key half-reaction in the process, the oxygen evolution reaction or OER.”

A half-reaction is either of the two parts of a redox, or reduction-oxidation, reaction in which electrons are transferred between two reactants; reduction refers to gaining electrons, oxidation means losing electrons.

The concept of half-reactions is often used to describe what goes on in an electrochemical cell, and half-reactions are commonly used as a way to balance redox reactions. Overpotential is the margin between the theoretical voltage and the actual voltage necessary to cause electrolysis—a chemical reaction driven by the application of electric current.

“We wanted to understand the origin of its record-high activity for the OER—1,000 times higher than the common commercial catalyst, iridium oxide,” Feng said. “Using synchrotron-based X-ray facilities at Argonne and lab-based X-ray photoelectron spectroscopy at the Northwest Nanotechnology Infrastructure site at OSU, we observed the surface chemical and crystalline-to-amorphous transformation of SrIrO3 during the OER.”

The observations led to a deep understanding of what was going on behind strontium iridate’s ability to work so well as a catalyst.

Feng added that the work provides insight into how applied potential facilitates the formation of the functional amorphous layers at the electrochemical interface and leads to possibilities for the design of better catalysts.