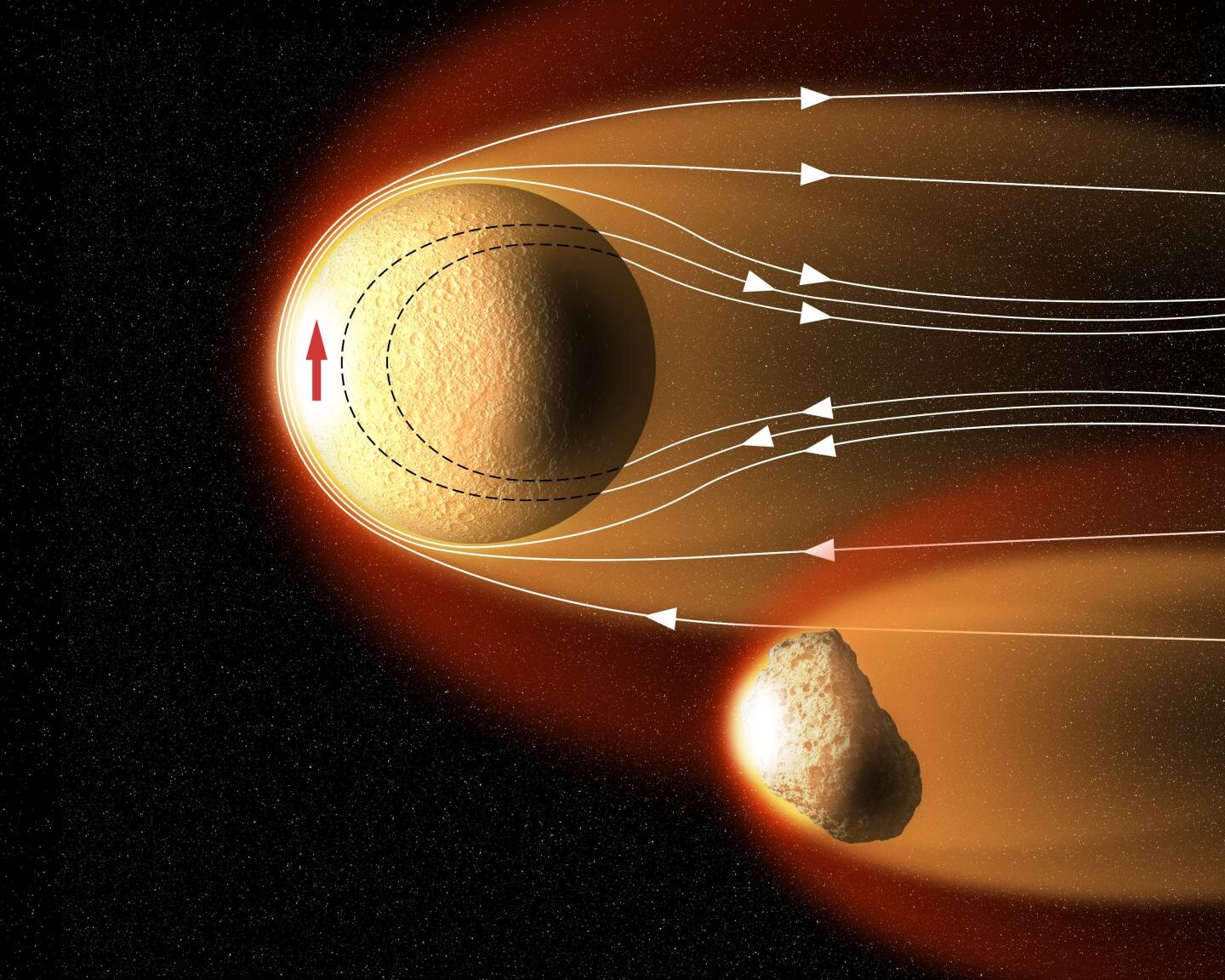 In a new paper published in the journal Nature Communications Earth and Environment, researchers at the University of Rochester were able to use magnetism to determine, for the first time, when carbonaceous chondrite asteroids—asteroids that are rich in water and amino acids—first arrived in the inner solar system. The research provides data that helps inform scientists about the early origins of the solar system and why some planets, such as Earth, became habitable and were able to sustain conditions conducive for life, while other planets, such as Mars, did not.

The research also gives scientists data that can be applied to the discovery of new exoplanets.

“There is special interest in defining this history—in reference to the huge number of exoplanet discoveries—to deduce whether events might have been similar or different in exo-solar systems,” says John Tarduno, the William R. Kenan, Jr., Professor in the Department of Earth and Environmental Sciences and dean of research for Arts, Sciences & Engineering at Rochester. “This is another component of the search for other habitable planets.”

Solving A Paradox Using A Meteorite In Mexico

Some meteorites are pieces of debris from outer space objects such as asteroids. After breaking apart from their “parent bodies,” these pieces are able to survive passing through the atmosphere and eventually hit the surface of a planet or moon.

Studying the magnetization of meteorites can give researchers a better idea of when the objects formed and where they were located early in the solar system’s history.

“We realized several years ago that we could use the magnetism of meteorites derived from asteroids to determine how far these meteorites were from the sun when their magnetic minerals formed,” Tarduno says.

In order to learn more about the origin of meteorites and their parent bodies, Tarduno and the researchers studied magnetic data collected from the Allende meteorite, which fell to Earth and landed in Mexico in 1969. The Allende meteorite is the largest carbonaceous chondrite meteorite found on Earth and contains minerals—calcium-aluminum inclusions—that are thought to be the first solids formed in the solar system. It is one of the most studied meteorites and was considered for decades to be the classic example of a meteorite from a primitive asteroid parent body.

In order to determine when the objects formed and where they were located, the researchers first had to address a paradox about meteorites that was confounding the scientific community: how did the meteorites gain magnetization?

Recently, a controversy arose when some researchers proposed that carbonaceous chondrite meteorites like Allende had been magnetized by a core dynamo, like that of Earth. Earth is known as a differentiated body because it has a crust, mantle, and core that are separated by composition and density. Early in their history, planetary bodies can gain enough heat so that there is widespread melting and the dense material—iron—sinks to the center.

New experiments by Rochester graduate student Tim O’Brien, the first author of the paper, found that magnetic signals interpreted by prior researchers was not actually from a core. Instead, O’Brien found, the magnetism is a property of Allende’s unusual magnetic minerals.

Having solved this paradox, O’Brien was able to identify meteorites with other minerals that could faithfully record early solar system magnetizations.

Tarduno’s magnetics group then combined this work with theoretical work from Eric Blackman, a professor of physics and astronomy, and computer simulations led by graduate student Atma Anand and Jonathan Carroll-Nellenback, a computational scientist at Rochester’s Laboratory for Laser Energetics. These simulations showed that solar winds draped around early solar system bodies and it was this solar wind that magnetized the bodies.

Using these simulations and data, the researchers determined that the parent asteroids from which carbonaceous chondrite meteorites broke off arrived in the Asteroid Belt from the outer solar system about 4,562 million years ago, within the first five million years of solar system history.

Tarduno says the analyses and modeling offers more support for the so-called grand tack theory of the motion of Jupiter. While scientists once thought planets and other planetary bodies formed from dust and gas in an orderly distance from the sun, today scientists realize that the gravitational forces associated with giant planets—such as Jupiter and Saturn—can drive the formation and migration of planetary bodies and asteroids. The grand tack theory suggests that asteroids were separated by the gravitational forces of the giant planet Jupiter, whose subsequent migration then mixed the two asteroid groups.

He adds, “This early motion of carbonaceous chondrite asteroids sets the stage for further scattering of water-rich bodies—potentially to Earth—later in the development of the solar system, and it may be a pattern common to exoplanet systems.”