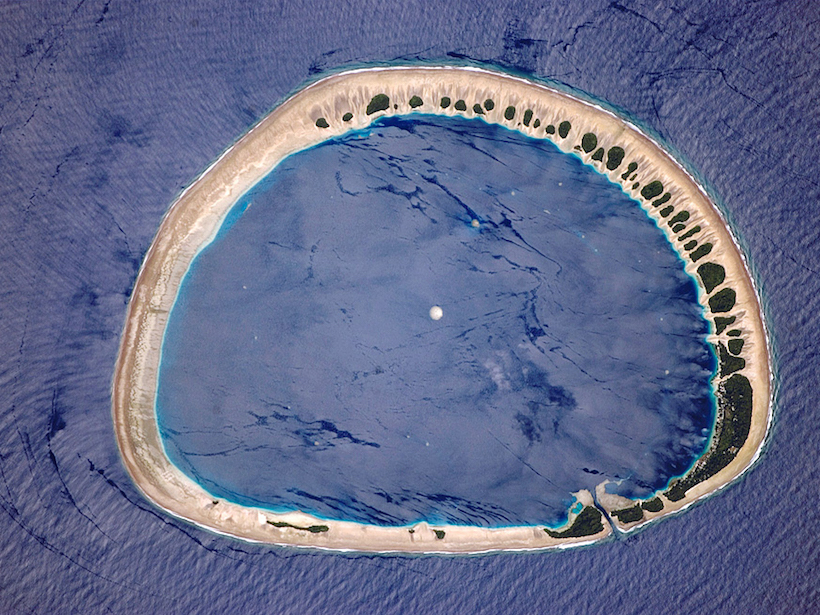 Almost 200 years ago, during his voyage on the HMS Beagle, Charles Darwin charted reef systems around the world, many of them with astonishing accuracy. On the basis of his observations, he formed a theory for the formation of reef systems. A new paper challenges Darwin’s theory.

In Darwin’s model, corals first form a fringing reef, attached to land. Next, coral colonies become barrier reefs, which are separated from land by water. If the barrier reef forms around a volcanic island, the land in the middle may subside while the corals keep growing up. In this way, the theory posits, ring-shaped atolls form.

Darwin’s model is generally accepted today. “It’s a story that is easy to understand,” said Anna Weiss of Midwestern State University in Texas, who was not involved with the new research. It’s easier to picture corals ringing a dead volcano, she said, than it is for us to grasp what millions of years of seafloor evolution looks like.

Reef geologists, however, have been debating and proposing alternatives to Darwin’s theory for decades. In the 1980s, André Droxler, who recently retired from Rice University in Texas, was studying cores drilled in the lagoon of North Male Atoll in the Maldives. His team found volcanic basalt at a depth of about 2.2 kilometers and dated it as being about 55 million years old.

“We saw that the formation of the atolls is related to a very long geological story.”

On top of the basalt were almost 2 kilometers of limestone deposits (karst), which are generally formed by sea creatures like corals and foraminifera. The presence of this karst layer suggests atolls forming on its flat carbonate terraces—independent of volcanic subsidence.

Droxler’s discovery was not the only one associating atoll formation with seafloor geology. Stéphan Jorry of the French Research Institute for Exploitation of the Sea found something similar while studying atolls in the Mozambique Channel between Madagascar and mainland Africa. “We saw that the formation of the atolls is related to a very long geological story,” Jorry said.

Droxler and Jorry are the authors of the review paper, which appeared in Annual Review of Marine Science in September.

Using evidence from their own and other studies in the Indian and Pacific Oceans, Droxler and Jorry propose a different model of atoll formation.

According to the authors, the story of atolls in the Maldives began about 55 million years ago, when volcanic islands sank, as Darwin had proposed. Land subsidence allowed space for complex seafloor evolution. Around 3.3 million years ago, carbonate platforms of corals and foraminifera began to grow on top of the volcanic basalt.

Sea levels rose and fell—a concept Darwin was not aware of, as the theory was proposed about 20 years after his theory of atoll formation. As sea levels oscillated between warm and cool periods, rainwater ate into the often-exposed flat carbonate platforms, making them bowl-like, with raised edges. Sun-loving corals formed on these edges, raising them further. Coral colonies thrived and retreated—dying if the water rose too high, then recolonizing the edges as water levels fell. The atolls we see today started forming around 400,000 years ago, the authors argue, in the middle of an exceptionally warm period when sea levels were about 20 meters higher than they are today.

“I think the karst model makes sense in light of current evidence,” said Weiss. “This paper does a nice job of showing that karst is likely the dominant control in parts of the Pacific and Indian Oceans.”

With rising sea levels, the oceanographers say, we may need to reconsider reef growth assumptions that are based on Darwin’s model of subsidence to understand how reefs will persist in the future.