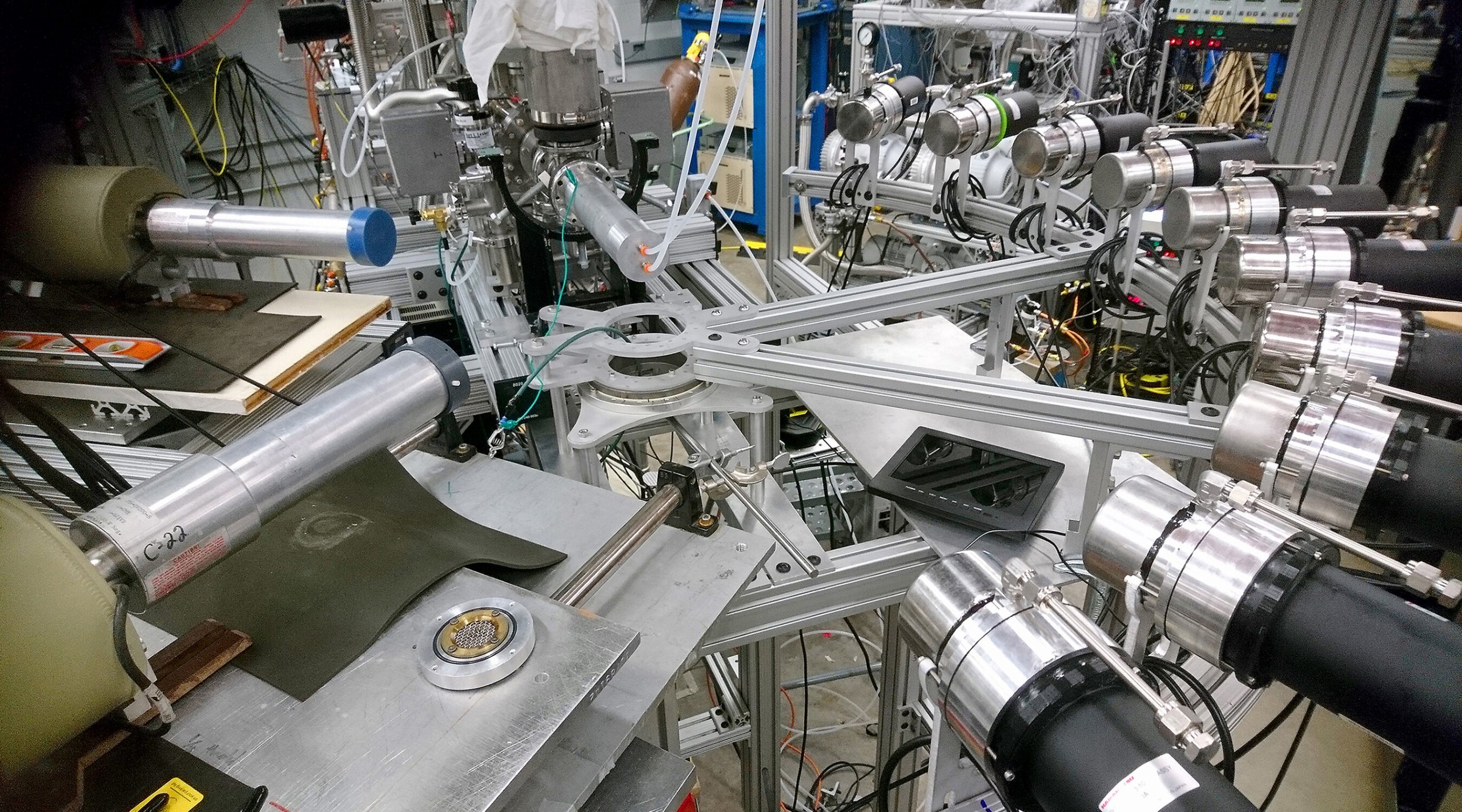 Led by the Department of Energy’s Oak Ridge National Laboratory, a new study clears up a discrepancy regarding the biggest contributor of unwanted background signals in specialized detectors of neutrinos. Better characterization of background could improve current and future experiments to detect real signals from these weakly interacting, electrically neutral subatomic particles and understand their role in the universe.

“We’ve identified a reaction with significant discrepancies between our new measurement and the historical data,” said ORNL’s Michael Febbraro, lead author of a study published in Physical Review Letters that presents an improved measurement of the reaction. “It’s one of the oldest reactions ever studied, and we’re still discovering new things about it.”

One older measurement from 2005, which had been used as a reference standard, had been analyzed incorrectly. It considered only the ground state of particles rather than a spectrum of ground and excited states. The new measurement, taken using a detector array based on neutron spectroscopy and secondary gamma rays, considered the entire spectrum of particle energies.

These nuclear physicists did not set out to study neutrino properties; they are usually concerned with atomic nuclei and their interactions. But in science, discoveries in one area often have profound impacts on other areas.

A well-known nuclear reaction turns carbon-13 into oxygen-16 and a neutron. That same reaction is a major contributor to background in experiments that measure neutrinos, whether they are emitted from the sun, atmosphere, accelerators, nuclear reactors or the Earth’s core.

The rate of that reaction needs to be well known to accurately calculate background in detectors like Japan’s Kamioka liquid scintillator antineutrino detector, or KamLAND. Using a University of Notre Dame accelerator, the researchers shot an alpha particle (i.e., helium-4 nucleus) at a target of carbon-13, briefly forming oxygen-17, which decayed into oxygen-16 and a neutron. The researchers measured the “cross section,” or probability of a reaction taking place, which is proportional to the rate of neutron production.

“We found that the current world data set is incorrect by quite a bit, because they didn’t account for other reaction channels that turn on,” Febbraro said. “We have a special type of detector which can tell what the neutron energy is, and that was the main enabling technology which made this measurement possible.”

Neutrino detectors need to be big to boost weak signals. KamLAND is filled with a hydrocarbon-based scintillator, an oil that interacts with neutrinos and emits light. Those sparkles make it easier to spot and count the elusive neutrinos. However, the decay products of radon, a naturally occurring radioactive gas, combine with carbon-13, a rare isotope of carbon present in the scintillator, creating the oxygen-16 and neutrons that mimic signals from neutrinos.

KamLAND weighs approximately a thousand tons. So, while carbon-13 accounts for only 1.1% of all carbon, KamLAND contains 10 tons of it. Radon entering the detector decays into daughter elements having different energies. The alpha particles produced by those decays interact with carbon-13, creating a background that overwhelms the neutrino signal. “It is the major source of background in these experiments,” Febbraro said.

The prior reference measurement of the reaction had measured nuclei only at the lowest energy level, or ground state. But nuclei live at higher energy levels too, called excited states. Different energy levels affect the likelihood that a reaction will take a specific path.

“We greatly improved the precision and accuracy of measurements by utilizing a setup that is sensitive to a spectrum of neutron energies,” Febbraro said.

The global scientific community makes use of evaluated nuclear databases containing expert-generated, peer-reviewed reference measurements. To estimate KamLAND’s background, KamLAND physicists pulled the 2005 reference measurement generated by nuclear physicists from one of these databases, the Japanese Evaluated Nuclear Data Library. They assumed the measurement was correct and plugged it into their calculations.

“The assumption that the excited states don’t matter is not true,” Febbraro said. “Including the excited states changes not just the size of the background it causes in KamLAND, but also impacts multiple aspects of the neutrino signal.”

ORNL physicist Kelly Chipps, who helped to analyze the data and interpret the results with her ORNL colleague Michael Smith, agreed.

“Background is something that you have to precisely understand,” she said. “Otherwise, the number of real events that you saw might be completely wrong.”

Asking a large, scintillator-filled neutrino detector to distinguish background from signal is like being blindfolded, fed chocolates with either a red or green candy coating, and asked to tell how many red chocolates you ate.

Just as knowing this ratio would let you make an estimation about candy quantities, the reference information in evaluated nuclear databases lets scientists estimate neutrino numbers.

“It turns out that our experiment got a different answer than what the ‘candy manufacturer’ said the ratio should be,” Chipps continued. “This isn’t because the manufacturer meant to give a wrong answer; it’s because their sorting machine was programmed with the wrong value.”

The new neutron-production rate found by Febbraro and his nuclear physics colleagues can now be used by the physicists working on KamLAND and other liquid-scintillator-based neutrino experiments to subtract background with better accuracy and precision.

Since this new measurement, Febbraro’s team has employed the special detector to measure similar reactions. They have found discrepancies in neutron-production rates for half a dozen isotopes. “Calculations in this mass region are not very reliable,” he said.

The title of the Physical Review Letters paper is “New 13C(α, n)16O Cross Section with Implications for Neutrino Mixing and Geoneutrino Measurements.” Detector development was supported by the DOE Office of Science. The measurement was made at the University of Notre Dame Nuclear Science Laboratory, which is supported by the National Science Foundation.