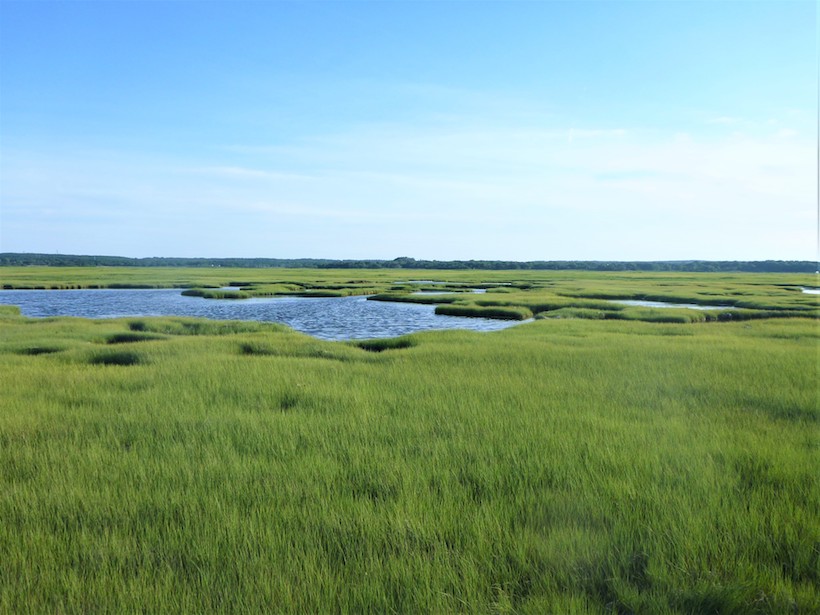 Most of the tidal marshes along the eastern coast of the United States formed within the past 6,000 years, according to new research published in Geophysical Research Letters.

Braswell et al. used new and existing data to assess the age of coastal wetland areas. The new study found evidence for two bouts of tidal marsh formation, corresponding to a decline in the rate of sea level rise after the last ice age and the arrival and settlement of Europeans in North America.

Tidal marshes mark the boundary between the saltwater of oceans and the freshwater of upland river systems, where tides create a partially flooded, saline landscape habitable by only a few highly specialized plants, such as cordgrass, rushes, and mangroves.

“Coastal wetlands are important for a myriad of reasons,” said Anna Braswell, an assistant professor at the University of Florida and lead author of the new study. “They act as nurseries for fish, provide filtration of nutrients, and they’re huge carbon stores.”

Braswell and her colleagues collected 97 core samples from five marshes along the Atlantic coast, from Georgia to Massachusetts; performed radiocarbon dating to estimate their age; and scoured the literature for previously dated material, pulling data from over 43 scientific publications to use in their final analyses.

According to their results, most of the tidal marshes along the North American Atlantic coast began forming 6,000 years ago, following a period of rapidly rising sea levels that had gradually begun to slow.

Agriculture and deforestation associated with early colonization released large amounts of sediment that were subsequently transported by streams and rivers to the coast.

But some salt marshes are much younger. The new study also found evidence for a pulse of marsh formation corresponding with European colonization starting 400 years ago, suggesting that agriculture and deforestation associated with early colonization released large amounts of sediments that were subsequently transported by streams and rivers to the coast.

Previous research had shown a correlation between marsh formation and colonial agricultural activity at Plum Island in Massachusetts and the bird-foot delta along the Mississippi River, but the current study indicates that this trend was much more widespread than previously assumed, occurring along the northeastern and southeastern parts of the U.S. Atlantic coast.

“This paper provides the strongest evidence we have today to show that European colonization led to a second period of marsh formation in some parts of the U.S.,” said Christopher Craft, a wetland scientist at Indiana University who was unaffiliated with the study.

“There have been many small-scale studies done on this topic over the last several decades, and what we need to do now is pull together existing data to look for broad patterns, such as the ones uncovered here.”

The formation of coastal marshes is often a race between the rates of rising seas and the amount of sediment rivers transport downstream.

The formation of coastal marshes is often a race between the rates of rising seas and the amount of sediment rivers transport downstream. As these sediment-laden waters make their way to the sea, they create sandbars and tidal flats in deltas and estuaries, leading to the formation of tidal marshes.

In addition, as water flows through already existing wetland areas, the fibrous stems and leaves of the plants that grow there facilitate the deposition of suspended particles, thus increasing the size and elevation of already existing marshes.

If sea level rise is slow enough (over the course of thousands of years), sediment is trapped by plants in large-enough quantities to keep them from drowning. However, during periods of rapid sea level rise, marsh plants are unable to establish islands quickly enough, and the transition zone between ocean and mainland contains few wetlands.

Sea levels have risen and fallen several times over the past several thousand years during the Pleistocene ice ages, making the timing of origin for the coastal marshes that exist today unclear.

At the end of the last ice age about 10,000 years ago, the Laurentide Ice Sheet that covered much of North America began to melt. For the next 4,000 years, this large block of ice covering millions of square kilometers dissipated as meltwater, causing rapid sea level rise.

But with the final dissolution of the Laurentide Ice Sheet and the stabilization of the nearby Greenland Ice Sheet, sea level rise slowed to a statelier pace some 6,000 years ago, which—according to the new study—is when tidal marshes began to appear along ocean margins.

Increased Sedimentation due to Colonial Agriculture

When the first European settlers began colonizing North America along the coasts, they cut down trees for timber, ship masts, and fuel and cleared away land for agriculture. This activity caused an increase in the amount of sediment carried away by nearby rivers and streams, according to the new study. This would have led directly to an increase in the rate of tidal marsh formation.

Those marshes most strongly associated with the onset of European colonization were located primarily in the northeastern United States, the new study found.

“This signal could possibly be due to the fact that the coastal plain is shorter in the northeast than in the southeast,” Braswell said. “This means sediment transport from erosion to the marsh would have occurred faster and have had less of a chance of getting trapped in a watershed somewhere on its way to the coast.”

The northeastern portion of the present-day United States also had some of the earliest established colonies. Consequently, deforestation would have occurred in this region before the construction of large dams.

“Dams trap sediment and prevent it from being distributed downstream,” Braswell said. “This may be one of the reasons we found a stronger signal for colonial marsh formation in the northeast.” (Geophysical Research Letters, https://doi.org/10.1029/2020GL089415)