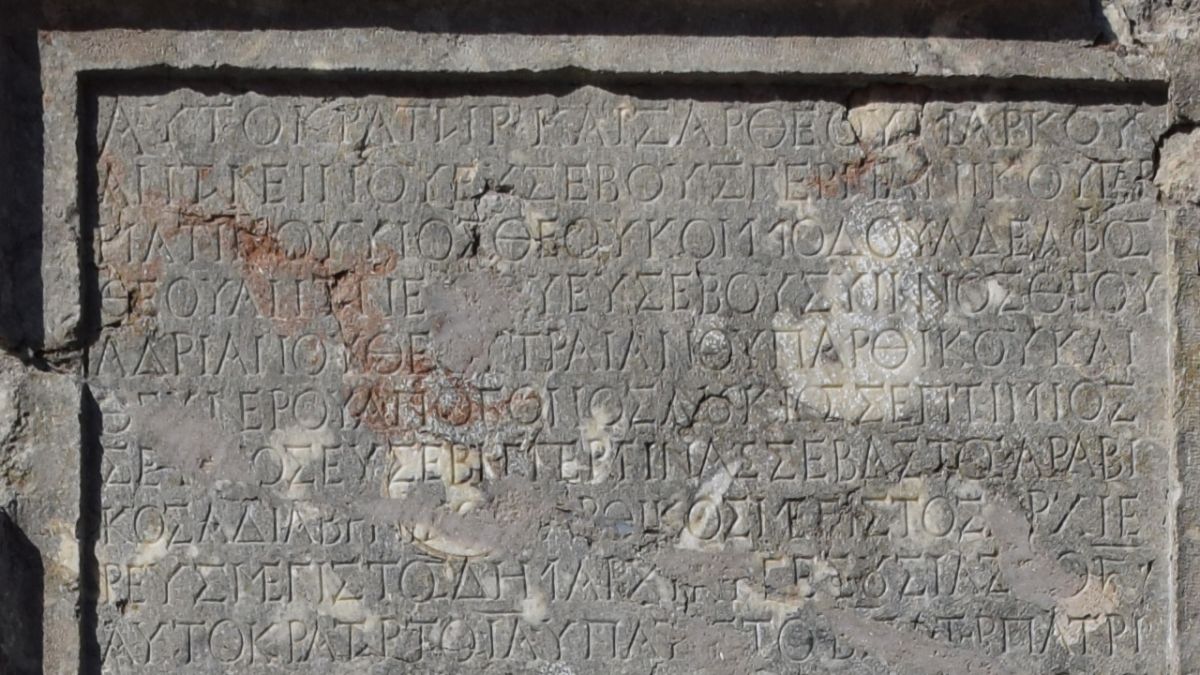 An ancient Greek inscription dating to the second century A.D. is essentially a thank-you note for a shady cash gift, a new translation reveals. The inscription immortalized the words of a Roman emperor who accepted piles of silver from a city anxious to demonstrate its loyalty.

During a time of political upheaval in the Roman Empire, residents of the city Nicopolis ad Istrum, in what is now Bulgaria, backed an unsuccessful contender for the emperor’s seat. After their champion’s loss, they promptly sent the victor — Emperor Septimus Severus — 700,000 silver coins, as a sign of fealty.

Emperor Severus openly acknowledged accepting their donation in a letter that was sent to the town in A.D. 198, written in ancient Greek. The letter’s text was then immortalized by the city as a stone monument. Scholars recently restored the broken artifact and translated the inscription, making it available to the public for the first time, a researcher with the restoration project told Live Science in an email.

Few letters penned by Roman emperors survived the era. In this rare example, Severus tells the town that he accepts their bribe, which he called a “cash contribution,” according to the new translation by Nicolay Sharankov, an assistant professor in the Department of Classical Philology at Sofia University in Bulgaria.

Sharankov recently translated the text into Bulgarian and updated a prior English translation by James H. Oliver, said Kalin Chakarov, an archaeologist at the Regional Museum of History in Veliko Tarnovo, Bulgaria, and coordinator of the project that restored the stone monument and its inscription.

Nicopolis ad Istrum was founded by the Roman Emperor Trajan at the beginning of the second century. It quickly grew to be a thriving metropolis, populated by artisans and full of sculpture and ornate architecture; the city even minted its own coins, according to the UNESCO World Heritage Centre.

But the city’s inhabitants may have found themselves in a potentially dangerous predicament when Emperor Commodus was assassinated in A.D. 192. Five men vied for the vacancy; the city likely threw its support behind one of the losers and had to prove to the new Emperor Severus that they could be trusted.

“That’s why they had probably decided to write a letter to the emperor, begging him for mercy, and bringing him the sum of 700,000 denarii (Roman silver coins) as a gift for their loyalty,” Chakarov explained. “The recently restored monument is actually an answer of the Emperor Septimius Severus and his son Caracalla to the citizens of Nicopolis ad Istrum. They describe their victories and state that they receive[d] this gift by people who had taken ‘the right side.'”

Because the emperor’s response was so important to the town, they carved his words into a limestone monument standing about 10 feet (3 meters) tall and 3 feet (1 m) wide, and weighing about 2 tons (2 metric tons), Chakarov said.

When archaeologists discovered the carved slab in the city’s ruins in the early 1900s, it was badly damaged and broken into burned fragments, Archaeology in Bulgaria reported. The monument was stored in pieces until the end of 2019, when a grant enabled scientists to begin the seven-month-long conservation process, Chakarov told Live Science in an email. Once the monument was repaired, it was installed at the Nicopolis ad Istrum site, next to a display of the translation in Bulgarian and English.

Emperor Severus was clearly pleased with the citizens’ gesture, praising the townsfolk for their “zeal” and declaring “You have shown thereby that you are men of good will and loyalty and are anxious to have the better standing in our judgment of you.”

But the emperor didn’t just embrace gifts of money in his letter — he also lied about his credentials.

In the inscription, Severus describes himself as an heir of Emperor Marcus Aurelius, who ruled from A.D. 161 to A.D. 180. However, Severus’ ancestors hailed from northern Africa; he was born in the city of Leptis Magna in what is now Libya, and he wasn’t related to Marcus Aurelius — or the line of emperors that came before him, Sharankov told Archaeology in Bulgaria.

“With this letter, the emperor sought to legitimize himself before the people,” Sharankov said.