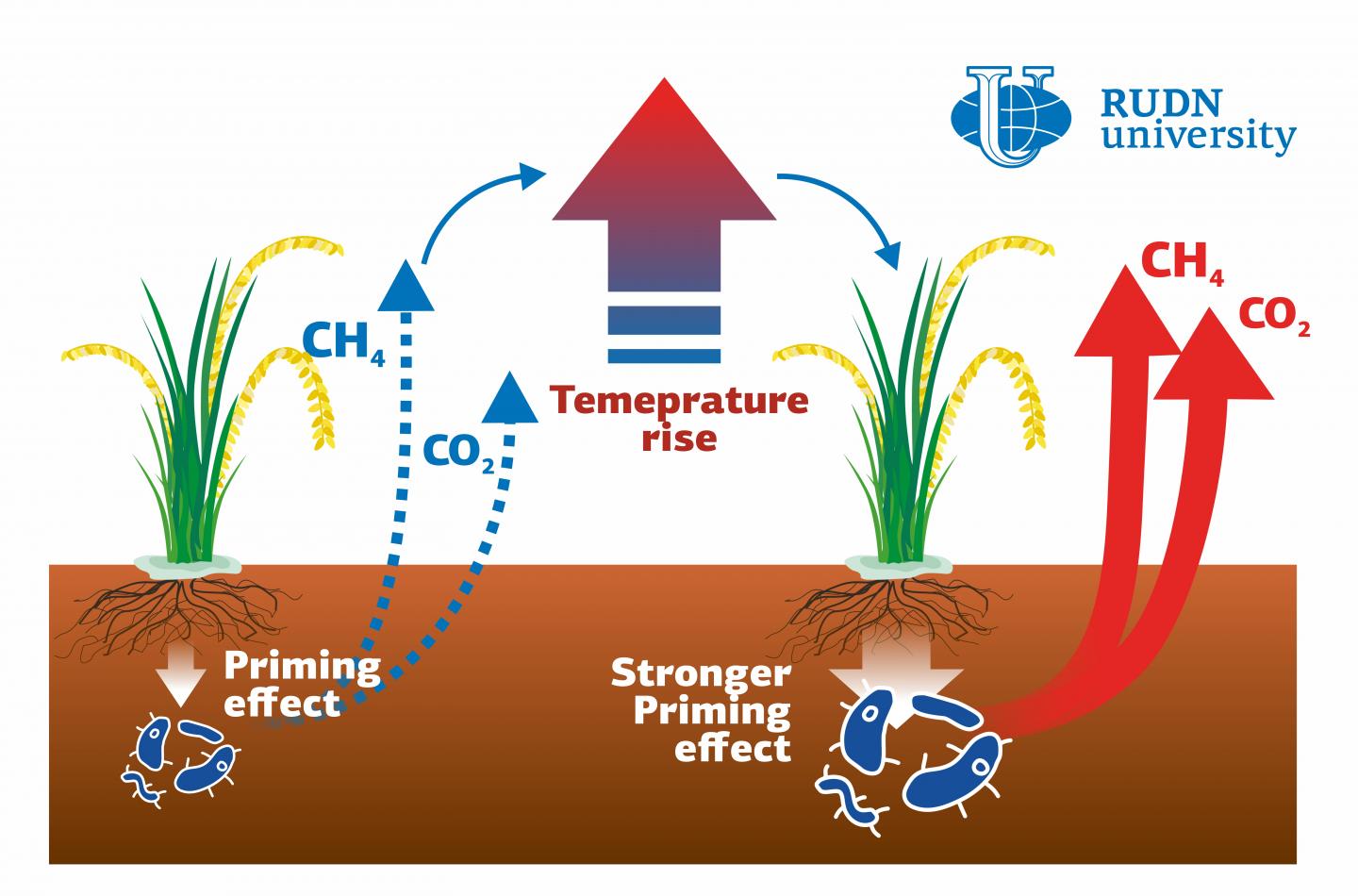 A soil scientist from RUDN University studied the decomposition of organic matter in rice paddies–the sources of CO2 and methane emissions. Both gases add to the greenhouse effect and affect climate warming in subtropical regions. The emissions increase when the roots of plants influence microbial communities in the soil. This influence, in turn, depends on temperature changes. Therefore, climate warming can lead to more greenhouse gas emissions. The results of the study were published in the Applied Soil Ecologyclimate change. The intensity of this process depends on the temperature of the environment and soil microorganisms. In the soils of rice paddies, methane is produced by single-cell organisms called archaea. However, to make methane, they require intermediary substances that come from plant roots. This is how the so-called priming effect occurs: the life of microorganisms is supported by organic substances released by plants through their roots. It is this effect that determines the number and activity of microorganisms in the soil. A soil scientist from RUDN University was the first to discover a correlation between the priming effect and greenhouse gas emissions and to describe the dynamics of these processes in view of global warming.

The team took soil samples from rice paddies located in the Hunan province in South-Eastern China. The samples were sifted to remove soil fauna and bits of plants. After that, water was added to them to model the conditions of a submerged rice paddy. After that, the samples were kept in plastic containers in a dark room for 75 days. To imitate different seasons, the scientists maintained different temperatures in the containers: 5 °C (winter), 15 °C (spring), 25 °C (autumn), and 35 °C (summer). The team wanted to measure how methane and CO2 emissions would vary under the influence of the priming effect in different temperature regimes. Sodium acetate, the simplest form of organic carbon produced by plant roots, was added to the soil to support the archaea.

The team measured the levels of greenhouse gas emissions every 2 to 5 days. On the 75th day, methane emissions from primed soils turned out to have increased 153 times compared to the samples without sodium acetate. The scientists also learned that the priming effect depended on the temperature. The soils demonstrated the highest sensitivity at 15 °C: in these samples, a 10? increase in temperature caused methane emission volumes to grow 25 times. As for CO2 emissions, they directly correlated with temperature levels. According to the team, this is because microorganisms become more active in a warm environment.

“The priming effect determined the correlation between the temperature and the process of organic matter decomposition in the soil. At 5-15 °C, temperature fluctuations had a huge effect on methane emissions: they increased almost 25 times. One could conclude that in warm winters methane emissions from the soil could be the main reason for the greenhouse effect. The results of other studies that do not take the priming effect into account should be interpreted with caution,” said Yakov Kuzyakov, a Ph.D. in Biology, and the Head of the Center for Mathematical Modeling and Design of Sustainable Ecosystems at the Agrarian and Technological Institute, RUDN University.