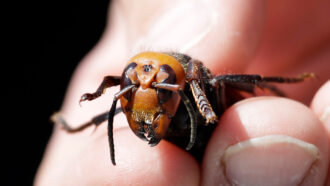 As if 2020 needed an extra disaster, the year also brought us “murder hornets.”

When two Asian giant hornets (Vespa mandarinia) were spotted in Washington and nearby British Columbia in May, news headlines heralded their “arrival” with a strange mix of horror and glee. Never mind that the invaders had been spotted in the state the year before; somehow it felt that they belonged in 2020.

Science News has tried to calm the buzz with facts. For one, the invasion is not as apocalyptic as some headlines have suggested, life sciences writer Susan Milius reported (SN: 7/4/20 & 7/18/20, p. 14). Not only is this not the first big hornet to invade the United States, the predatory insects hunt for honey­bees, not people. And the hornets are not exactly taking over. Scientists have mounted an extensive effort to eradicate them — officials in Washington found and destroyed their first nest in October — and a map released this year suggests that swaths of challenging habitat might make it hard for the hornets to sweep across America (SN: 11/7/20, p. 12).

That hasn’t stopped people all over the country from thinking they’ve found one. “Suddenly, overlooked local wasp and hornet species … hanging around in corners of people’s backyards for millennia become the subjects of panic-driven calls,” says Gale Ridge, an entomologist at the Connecticut Agricultural Experiment Station in New Haven. Ridge has been taking those calls.

Concerned readers have reached out to Science News, too. We shared with Ridge the half dozen photographs of suspected murder hornets we received. She spotted European hornets, bald-faced hornets (technically yellow jackets) and robber flies. No murder hornets.

“In the public mind, the hornets are ‘here,’ ” Ridge says. She patiently explains to her frazzled callers that the hornets are being intercepted nearly 3,000 miles away across an entire continent.

“The combination of half-listening and overdramatization of the facts by the media creates an anxiety-driven stew,” Ridge says. She combats that anxiety by teaching local residents about New England’s insects, such as European hornets and cicada-killer wasps that are often mistaken for Asian giant hornets. “One creates a fresh storybook of information on which callers can relax, feel comfortable and thrive,” she says.