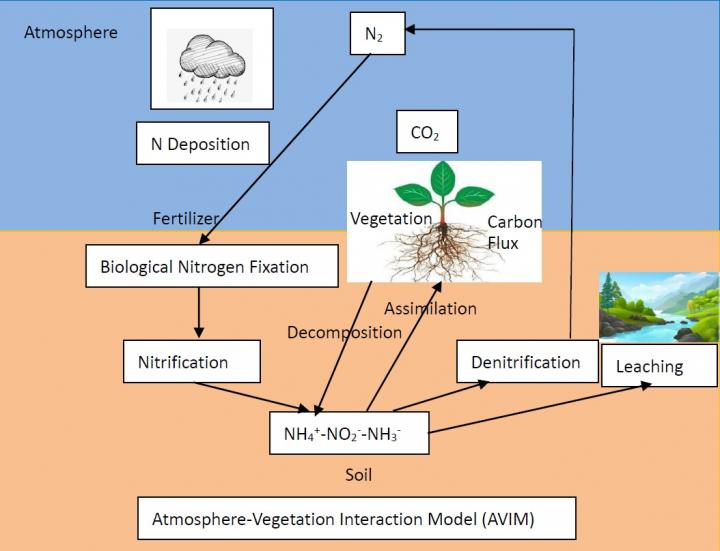 Along with Europe and North America, East Asia has in the past few decades become one of the three largest nitrogen deposition centers in the world. This can lead to considerable impacts on the structure and function of ecosystems; for instance, excessive nitrogen is thought to be one of the drivers of biodiversity change across the globe; and nitrogen deposition can also cause acidification of soils and water. Consequently, it is important to study the carbon-nitrogen cycle in East Asia.

Professor Li Dan from the Institute of Atmospheric Physics, Chinese Academy of Sciences, and his colleagues, incorporated the full nitrogen cycle–including deposition, mineralization, immobilization, biological fixation, nitrification, denitrification, volatilization, and leaching of nitrogen–into a land surface model (AVIM: Atmosphere-Vegetation Interaction Model), which was designed and developed by Chinese scientists and was one of the earliest models to consider the dynamical process of vegetation. The latest version of AVIM has been run for the China region for the period 1979 to 2015 at a resolution of 10 km, and the results have been recently published in Atmospheric and Oceanic Science Letters (https://doi.org/10.1080/16742834.2020.1819145).

According to this study, gross primary production and net primary production are simulated well by AVIM across China when compared to carbon flux data from MODIS and the ensemble mean data of TRENDY(Trends in Net Land-atmosphere Carbon Exchange) . The nitrogen deposition and biological fixation are also reasonable well simulated at the regional scale. However, the variation in carbon and nitrogen fluxes shows discrepancies in the different datasets and in AVIM, which highlights the complexity and importance of coupling nitrogen with the carbon cycle into land surface models in East Asian monsoon regions.