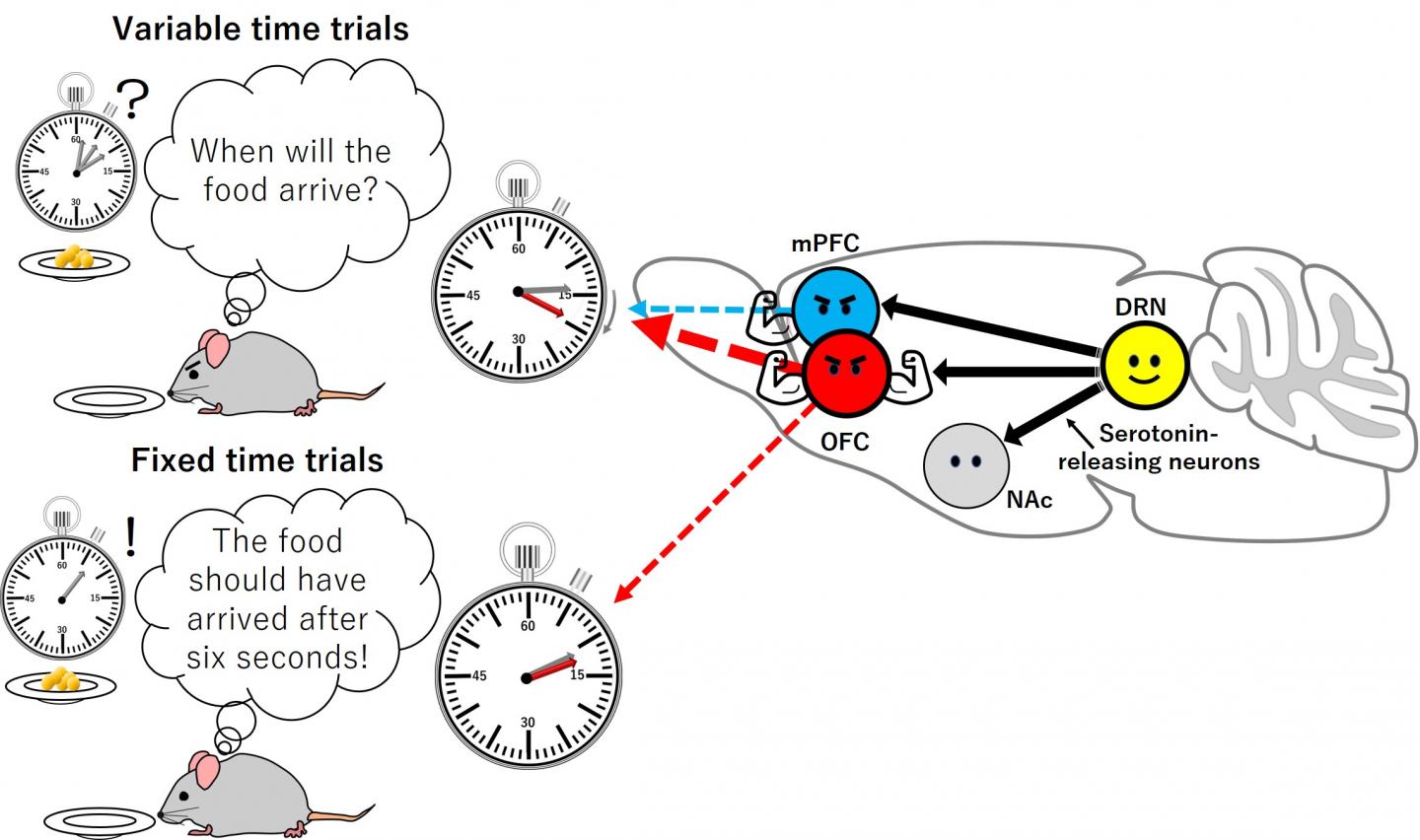 We’ve all been there. Whether we’re stuck in traffic at the end of a long day, or eagerly anticipating the release of a new book, film or album, there are times when we need to be patient. Learning to suppress the impulse for instant gratification is often vital for future success, but how patience is regulated in the brain remains poorly understood.

Now, in a study on mice conducted by the Neural Computation Unit at the Okinawa Institute of Science and Technology Graduate University (OIST), the authors, Dr. Katsuhiko Miyazaki and Dr. Kayoko Miyazaki, pinpoint specific areas of the brain that individually promote patience through the action of serotonin. Their findings were published 27th November in Science Advances.

“Serotonin is one of the most famous neuromodulators of behavior, helping to regulate mood, sleep-wake cycles and appetite,” said Dr. Katsuhiko Miyazaki. “Our research shows that release of this chemical messenger also plays a crucial role in promoting patience, increasing the time that mice are willing to wait for a food reward.”

Their most recent work draws heavily on previous research, where the unit used a powerful technique called optogenetics – using light to stimulate specific neurons in the brain – to establish a causal link between serotonin and patience.

The scientists bred genetically engineered mice which had serotonin-releasing neurons that expressed a light-sensitive protein. This meant that the researchers could stimulate these neurons to release serotonin at precise times by shining light, using an optical fiber implanted in the brain.

The researchers found that stimulating these neurons while the mice were waiting for food increased their waiting time, with the maximum effect seen when the probability of receiving a reward was high but when the timing of the reward was uncertain.

“In other words, for the serotonin to promote patience, the mice had to be confident that a reward would come but uncertain about when it would arrive,” said Dr. Miyazaki.

In the previous study, the scientists focused on an area of the brain called the dorsal raphe nucleus – the central hub of serotonin-releasing neurons. Neurons from the dorsal raphe nucleus reach out into other areas of the forebrain and in their most recent study, the scientists explored specifically which of these other brain areas contributed to regulating patience.

The team focused on three brain areas that had been shown to increase impulsive behaviors when they were damaged – a deep brain structure called the nucleus accumbens, and two parts of the frontal lobe called the orbitofrontal cortex and the medial prefrontal cortex.

“Impulse behaviors are intrinsically linked to patience – the more impulsive an individual is, the less patient – so these brain areas were prime candidates,” explained Dr. Miyazaki.

Good things come to those who wait (or not…)

In the study, the scientists implanted optical fibers into the dorsal raphe nucleus and also one of either the nucleus accumbens, the orbitofrontal cortex, or the medial prefrontal cortex.

The researchers trained mice to perform a waiting task where the mice held with their nose inside a hole, called a “nose poke”, until a food pellet was delivered. The scientists rewarded the mice in 75% of trials. In some test conditions, the timing of the reward was fixed at six or ten seconds after the mice started the nose poke and in other test conditions, the timing of the reward varied.

In the remaining 25% of trials, called the omission trials, the scientists did not provide a food reward to the mice. They measured how long the mice continued performing the nose poke during omission trials – in other words, how patient they were – when serotonin-releasing neurons were and were not stimulated.

When the researchers stimulated serotonin-releasing neural fibers that reached into the nucleus accumbens, they found no increase in waiting time, suggesting that serotonin in this area of the brain has no role in regulating patience.

But when the scientists stimulated serotonin release in the orbitofrontal cortex and the medial prefrontal cortex while the mice were holding the nose poke, they found the mice waited longer, with a few crucial differences.

But in the medial prefrontal cortex, the scientists only saw an increase in patience when the timing of the reward was varied, with no effect observed when the timing was fixed.

“The differences seen in how each area of the brain responded to serotonin suggests that each brain area contributes to the overall waiting behavior of the mice in separate ways,” said Dr. Miyazaki.

To investigate this further, the scientists constructed a computational model to explain the waiting behavior of the mice.

The model assumes that the mice have an internal model of the timing of reward delivery and keep estimating the probability that a reward will be delivered. They can therefore judge over time whether they are in a reward or non-reward trial and decide whether or not to keep waiting. The model also assumes that the orbitofrontal cortex and the medial prefrontal cortex use different internal models of reward timing, with the latter being more sensitive to variations in timing, to calculate reward probabilities individually.

The researchers found that the model best fitted the experimental data of waiting time by increasing the expected reward probability from 75% to 94% under serotonin stimulation. Put more simply, serotonin increased the mice’s belief that they were in a reward trial, and so they waited longer.

“This confirmed the idea that these two brain areas are calculating the probability of a reward independently from each other, and that these independent calculations are then combined to ultimately determine how long the mice will wait,” explained Dr. Miyazaki. “This sort of complementary system allows animals to behave more flexibly to changing environments.”

Ultimately, increasing our knowledge of how different areas of the brain are more or less affected by serotonin could have vital implications in future development of drugs. For example, selective serotonin reuptake inhibitors (SSRIs) are drugs that boost levels of serotonin in the brain and are used to treat depression.

“This is an area we are keen to explore in the future, by using depression models of mice,” said Dr. Miyazaki. “We may find under certain genetic or environmental conditions that some of these identified brain areas have altered functions. By pinning down these regions, this could open avenues to provide more targeted treatments that act on specific areas of the brain, rather than the whole brain.”