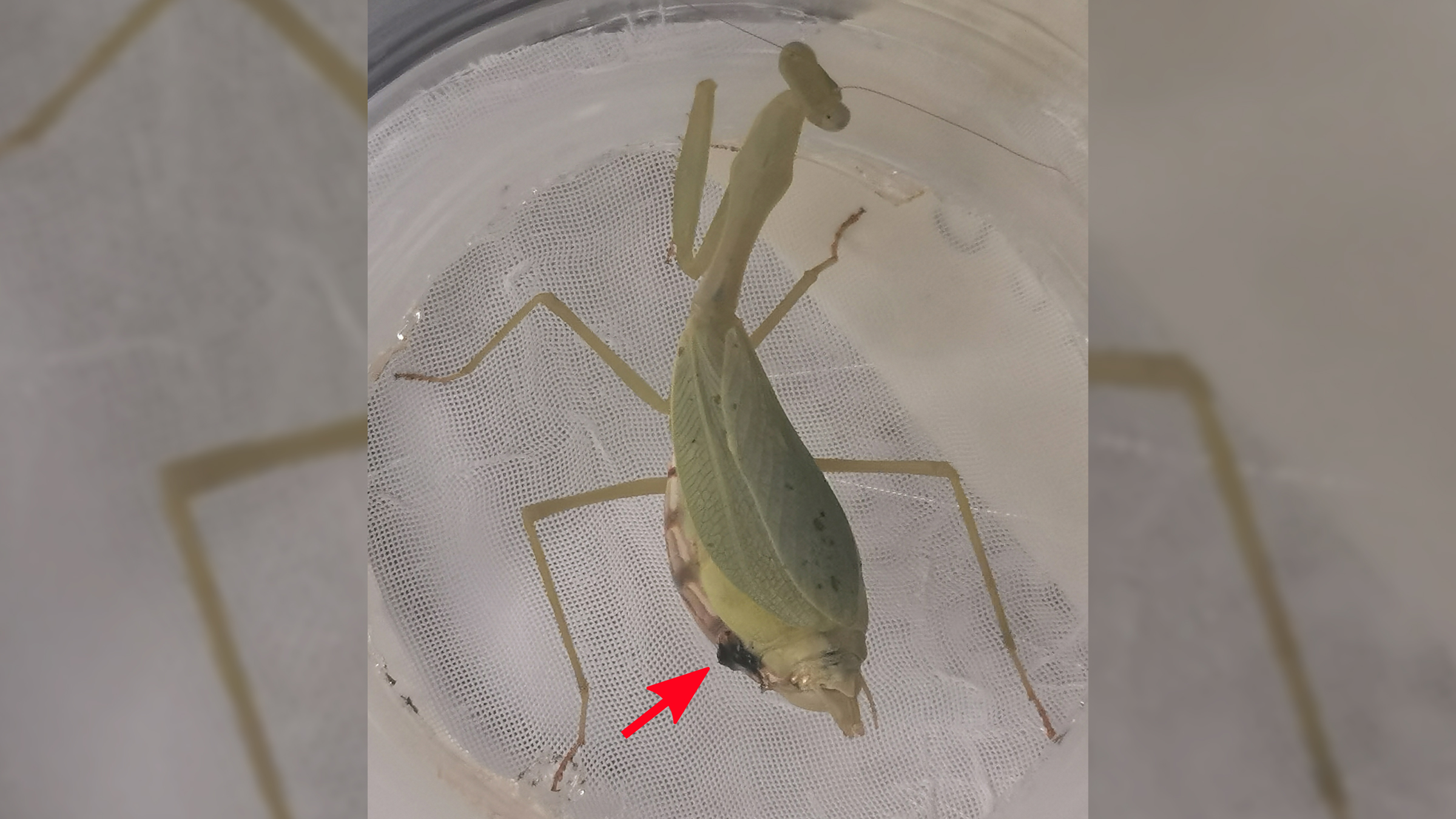 Female mantises are notorious for sexual cannibalism, gulping down males before, during or after it’s time to tango. But unlike other male mantises, the male springbok mantis sometimes escapes cannibalism by violently wrestling and even seriously injuring the female during mating bouts.

In a new study, males springboks that sparred with females sometimes escaped becoming a snack; if they pinned down the female, they were more likely to mate and survive the encounter. In contrast, female mantises that won the wrestling match always cannibalized the male, the researchers found.

“Sex is rarely a harmonious affair,” study lead researcher Nathan Burke, a research fellow of biological sciences at the University of Auckland in New Zealand, told Live Science in an email. “For praying mantises, it’s a game of Russian roulette. In the springbok mantis, males have found a way to beat the odds and secure matings in the face of cannibalistic annihilation.”

Related: Lunch on the wing: Mantises snack on birds (photos)

The springbok mantis (Miomantis caffra) was accidentally introduced to New Zealand from South Africa more than 40 years ago, and the species is now a common resident in gardens there, Burke said. While mantises are known for sexual cannibalism — the praying mantis (Tenodera sinensis) engages in this gory activity in up to 28% of natural encounters — the female springbok mantis is a standout, with more than 60% of sexual encounters leading to devoured males, he said.

What’s more, cannibalism in springbok mantises almost always happens before mating, which gives the females a bounty of nutrients helpful for reproduction. Chowing down on males before procreation isn’t a problem for female springbok mantises — they can produce offspring asexually from unfertilized eggs in a process known as parthenogenesis, the researchers wrote in the study.

“So, how do males pass on their genes when females are so determined to eat them?” Burke wondered. “This was the puzzle that I wanted to solve.” Using a butterfly net, he collected 104 mantises from local gardens and parks around Auckland. Then, he divided them into 52 male-female pairs and observed them in a lab.

Of the 52 pairs, 29 (56%) of the males initiated contact with the female during the first 12 hours of the lab-based “blind date.” These males weren’t shy about it — they leaped onto females while rapidly fluttering their wings. Of the 29 contacts, 26 (90%) escalated to struggles that were short (averaging 12.7 seconds) but violent, with the females aggressively fighting back. The females won more than one-third of these 26 wrestling matches, pinning down and cannibalizing the males in nine (35%) of the cases.

“When males and females are paired together, I found that males engage females in violent wrestling matches where each sex tries to be first to pin the other down with their raptor-like forelegs,” Burke said. “Females that win the struggle always end up eating the male. But males that win are much more likely to mate instead.”

Of the 26 struggles, two (7%) ended without a wrestling winner, with one male mating and surviving and the other male surviving (without mating). Meanwhile, males succeeded in pinning down females in 15 (58%) of the struggles, and of those, 67% mated (half of which were cannibalized), 13% were cannibalized without mating and 20% didn’t mate or get cannibalized. In all, males that won the battle “reduced the incidence of cannibalism by 78% compared to males that lost,” the researchers wrote in the study.

These mating victories were, on occasion, vicious. “Males that win wrestling bouts occasionally stab females with their dagger-like claws that they usually use for catching prey,” Burke said. “These stab wounds can be quite severe, resulting in females losing a lot of [hemolymph]/blood.” None of the males that injured females during a wrestling match were cannibalized, he noted.

Four of the females that lost the struggle sustained visible wounds. However, it’s not known whether these wounds shortened the female’s life span; more research is needed to investigate this matter, Burke said.

So, does male-initiated wrestling work? The evidence suggests that it does; when males won the fight, the most frequent outcome was mating, the researchers found. “We think the reason males have evolved harmful wrestling behaviors is because of the enormous threat that females pose,” Burke said. “Males have to do whatever they can to avoid being eaten, otherwise they’ll fail to sire any offspring. And fighting back against female aggression, even if it causes terrible injury, seems to be a very effective tactic.”

The study is the first to show that coercive behavior, even if it leads to injury, directly reduces cannibalism risk. It’s also the first documented instance of coercive mating in mantises, the researchers said.

The study was published online Wednesday (Jan. 20) in the journal Biology Letters.