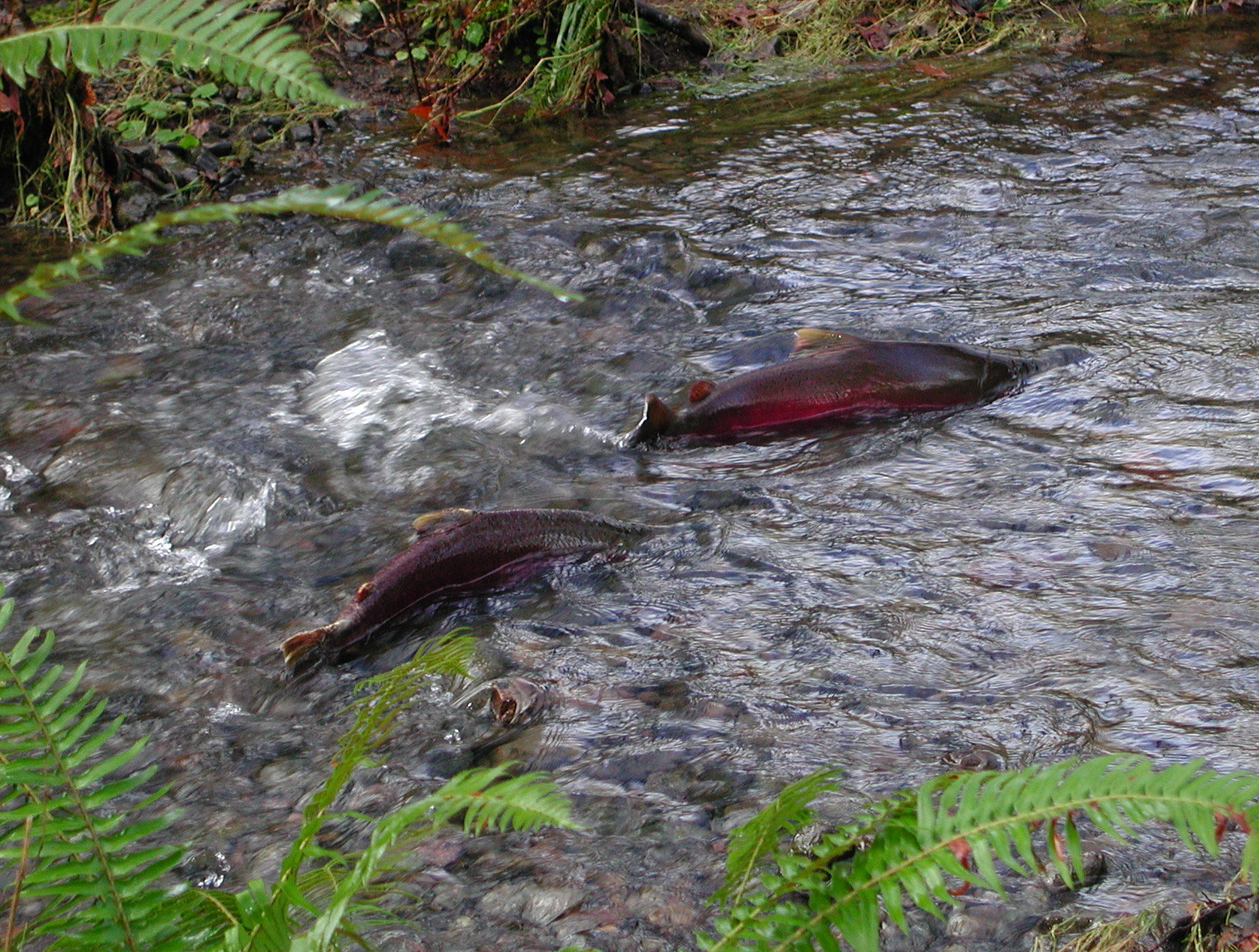 When officials in Seattle spent millions of dollars restoring the creeks along Puget Sound—tending to the vegetation, making the stream beds less muddy, building better homes for fish—they were thrilled to see coho salmon reappear.

But when it rained, more than half, sometimes all, of the coho in a creek would suffer a sudden death.

These mysterious die-offs—an alarming phenomenon that has been reported from Northern California to British Columbia—have stumped biologists and toxicologists for decades. Numerous tests ruled out pesticides, disease and other possible causes, such as hot temperatures and low dissolved oxygen.

Now, after 20 years of investigation, researchers in Washington state, San Francisco and Los Angeles say they have found the culprit: a very poisonous yet little-known chemical related to a preservative used in car tires.

This chemical is just one of a vast number of contaminants that washes off roads whenever it rains. This giant soup of pollutants, which includes trillions of microplastics, rushes down drains and into creeks and ultimately into the sea.

“We pretty much figured out that anywhere there’s a road and people are driving their car, little bits of tire end up coming off your tire and end up in the stormwater that flows off that road,” said Ed Kolodziej, an environmental engineer and chemist at the University of Washington, Tacoma/Seattle, whose lab led a study that was published Thursday in the journal Science. “We were able to get all the way down to this one highly toxic chemical—something that kills large fish quickly and we think is probably found on every single busy road in the world.”

Coho salmon, also known as silver salmon, are prized among fishermen and an important indicator species—the canary in the coal mine for coastal watersheds along the northern Pacific Ocean. Their range has historically stretched from the creeks nestled in the redwood forests near Santa Cruz all the way north to the waters of Alaska. The few coho populations that still exist in California are either endangered or threatened.

The fish are born in freshwater streams, where they stay for about a year before making the long journey through rivers and estuaries and into the ocean. They return a year and a half later to lay and fertilize eggs before dying. Many obstacles have made this journey across different environments more difficult: Shrinking estuaries, blocked passages from dams and culverts, as well as drought and a changing climate.

“While we often monitor temperature and dissolved oxygen levels, much more could be done to test for toxicity,” said Mariska Obedzinski, a California Sea Grant fisheries biologist who leads monitoring and salmon recovery research on the Russian River and was shocked to see the findings out of Puget Sound.

“With so many chemicals out there,” she said, “it is overwhelming to know what to test for, so the results of this study will help us home in on testing for a chemical that we now know causes acute mortality.”

Peter Moyle, a longtime salmon expert and emeritus professor at the University of California, Davis, recalled the four small streams in San Francisco Bay that once had coho. He has been following the Puget Sound research, which he is also not affiliated with, and now wonders whether all the roads and major freeways that crossed these creeks contributed to their disappearance decades ago, despite all the restoration efforts.

“The challenge when you talk about declines of really sensitive fish like coho salmon, is that there are so many things that are affecting them simultaneously, it’s hard to pinpoint one,” he said. “That’s why it’s so interesting that in these Puget Sound streams, they found this one chemical that seems to be the smoking gun.”

The scientists in Washington state spent years studying dozens of streams—looking for patterns and comparing samples from pristine creeks, to those in more urban areas. They narrowed the culprit down to stormwater, then to creeks that were near busier roads, and finally to the wear and tear of car tires.

Researchers then soaked tire bits in room temperature water for about 24 hours. As many as 1,500 to 2,800 chemicals would leach out and, using high-resolution mass spectrometry, the team methodically identified and analyzed these compounds.

They tried sectioning this tire cocktail into different chemical properties, such as removing all metals from the solution. Then they tested these different sub-mixtures to see which ones were still toxic to the salmon. They repeated this process until only a few chemicals were left—including one mysterious speck of purple that they knew very little about.

“We knew that the chemical that we thought was toxic had 18 carbons, 22 hydrogens, two nitrogens and two oxygens. And we kept trying to figure out what it was,” said Zhenyu Tian, the study’s lead author and a research scientist at the Center for Urban Waters at University of Washington Tacoma. “Then one day in December, it was just like bing! in my mind. The killer chemical might not be a chemical directly added to the tire, but something related.”

The smoking gun turned out to be related to a chemical called 6PPD, which is essentially a preservative to keep car tires from breaking down too quickly. When 6PPD hits the road and reacts with ozone gas, the chemical transforms into multiple new chemicals, including a compound known as 6PPD-quinone.

Not much is known about 6PPD-quinone, but it does appear to be very toxic (at about 1 microgram per liter) and does not degrade as quickly as 6PPD.

It remains unclear how exactly this chemical kills coho salmon, but it may be doing something to the lining of the salmon’s vascular system, said Jen McIntyre, an aquatic ecotoxicologist at Washington State University who has been studying this mystery for more than 15 years.

Once coho are exposed to 6PPD-quinone, they begin to breathe erratically—almost like they’re gasping for air. They lose equilibrium and start spiraling in circles, unable to stay upright in the water. Eventually they drop to the bottom, where they stop moving and die.

McIntyre has begun testing this toxin on five other Pacific salmon species, which have shown different levels of sensitivity. She’s also curious how 6PPD-quinone might affect other organisms, and more studies need to be conducted to understand whether this chemical has any impact on humans.

Worrisome concentrations of 6PPD-quinone were also confirmed in samples from L.A. and San Francisco. Rebecca Sutton, a study co-author who specializes in emerging contaminants, had reached out to the researchers in Puget Sound after coming across a number of tire rubber chemicals in her studies of San Francisco Bay.

These discoveries fit into a growing body of science that illuminates how driving is not just an air pollution and climate change problem, she said. In a separate study last year, Sutton was surprised to find that tire particles were by far the largest source of microplastics in the bay.

Across California, water quality regulators, state transportation officials and federal scientists have been learning about these startling connections between stormwater and coho deaths during recent meetings and conferences. The state’s coastal highway, some pointed out, crosses numerous streams and estuaries.

“Now that they’ve gotten it nailed down to one compound—that’s amazing. It’s also really helpful that something could be done about it,” said Joe Dillon, who specializes in water quality and toxicology for NOAA Fisheries. “This means the tire industry can work on figuring out how to replace that compound with something less toxic. It means they can be pushed by the state of California or by nongovernmental organizations to undertake that work.”

Matt St. John, executive officer of California’s Regional Water Quality Control Board on the north coast, home to most of the remaining coho salmon in California, said he’d like to start monitoring for this chemical in creeks to determine what further action is needed.

“The study is definitely an eyebrow-raiser,” he said. “When you find a causal link like this that is controllable, we need to take this type of information seriously.”