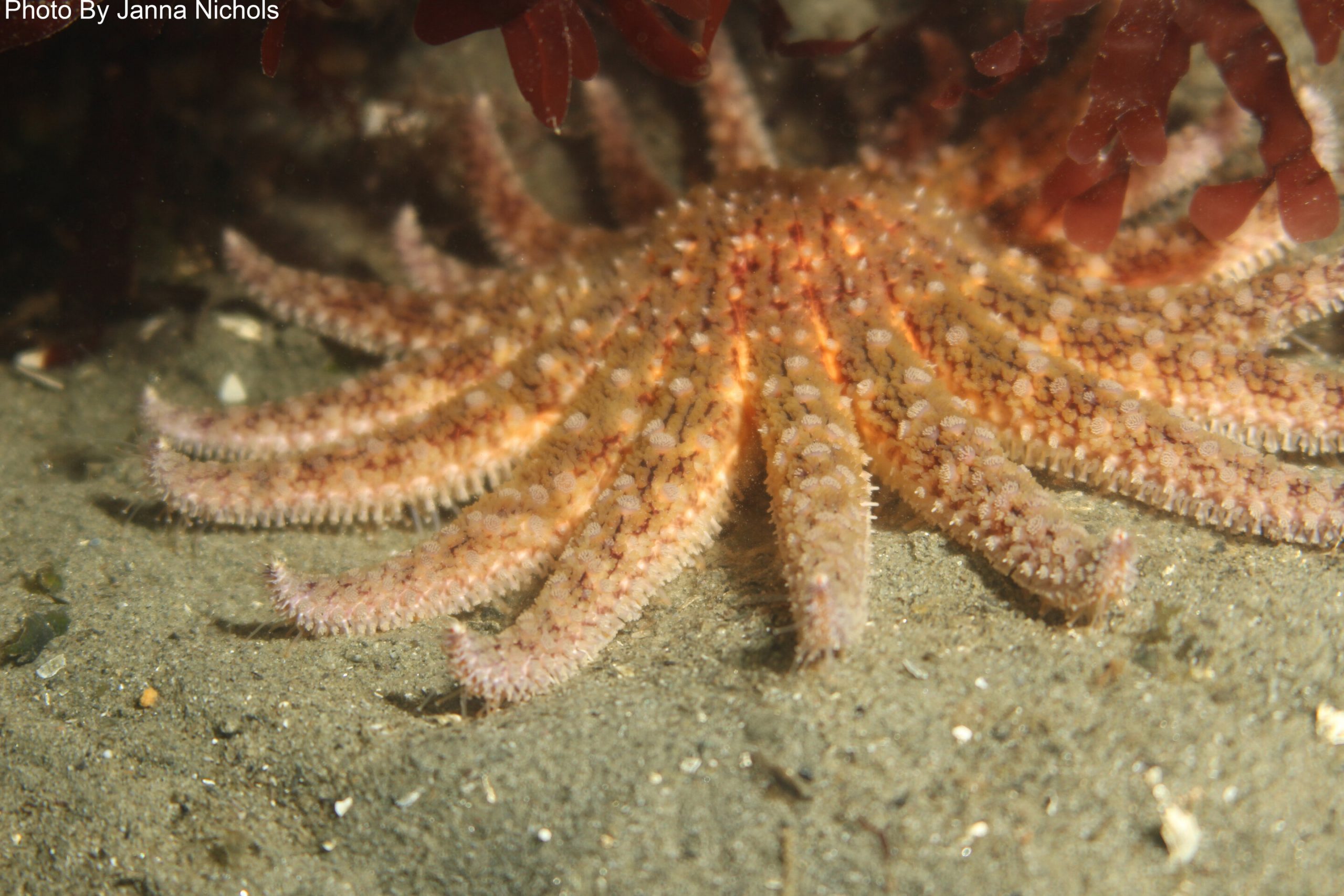 The iconic sunflower sea star has been listed as critically endangered by the International Union for Conservation of Nature following a groundbreaking population study led by Oregon State University and The Nature Conservancy.

“These sea stars used to be easy to find and were a hit with students and divers because they are unforgettable—they can be as big as a trash bin lid with 20 slimy arms covered in suction cups,” said OSU’s Sarah Gravem, a research associate in the College of Science and the lead author on the study. “Unfortunately, your chances of finding one now are next to nothing in most of the contiguous United States—this listing is one step above extinction—and I don’t think they’re coming back without help like captive rearing and reintroduction and reducing direct harvest and accidental harvest.”

More than 60 institutions joined Oregon State and The Nature Conservancy in the population study on the sunflower sea star, known scientifically as Pycnopodia helianthoides, which plays an important role in maintaining kelp forests, and thus sustaining marine life, along the West Coast from Alaska to Baja, California.

Populations of the sunflower sea star suffered dramatic crashes because of a marine wildlife epidemic event, referred to as sea star wasting syndrome, that began in 2013.

Scientists used more than 61,000 population surveys from 31 datasets to calculate a 90.6% decline in the sunflower sea stars and estimated that as many as 5.75 billion animals died from the disease, whose cause has not been determined.

Moreover, the research produced no indications of population recovery in any region in the five to seven years since the outbreak.

Sunflower sea stars are now nearly absent in Mexico as well as the contiguous United States, the scientists say. No stars have been seen in Mexico since 2016, none in California since 2018, and only a handful in Oregon and Washington since 2018.

Sunflower sea stars are a key predator of purple sea urchins and the sea star decline has helped fuel an explosion in the urchin population in many regions. An overabundance of urchins is linked to a decline in kelp forests already facing pressure from marine heat wave events, making the future uncertain for ecosystems that provide habitat for thousands of marine animals and help support coastal economies.

“Because most people aren’t out in the ocean every day, we don’t realize how much it’s being changed and impacted by humans,” said study co-author Sara Hamilton, a Ph.D. candidate in the OSU College of Science. “We need to think creatively about how to keep our ocean healthy. While drawing down carbon emissions is the most pressing need, rebuilding key predator populations, like the sunflower sea star, can be an important piece of the puzzle too.”

The IUCN Red List of Threatened Species is an important resource for guiding conservation action and policy decisions, assessing the risk of extinction of a species should no conservation action be taken. Species are assigned to one of eight categories of threat based on criteria linked to population trend, population size and structure and geographic range.

Species listed as critically endangered, endangered or vulnerable are collectively described as threatened.