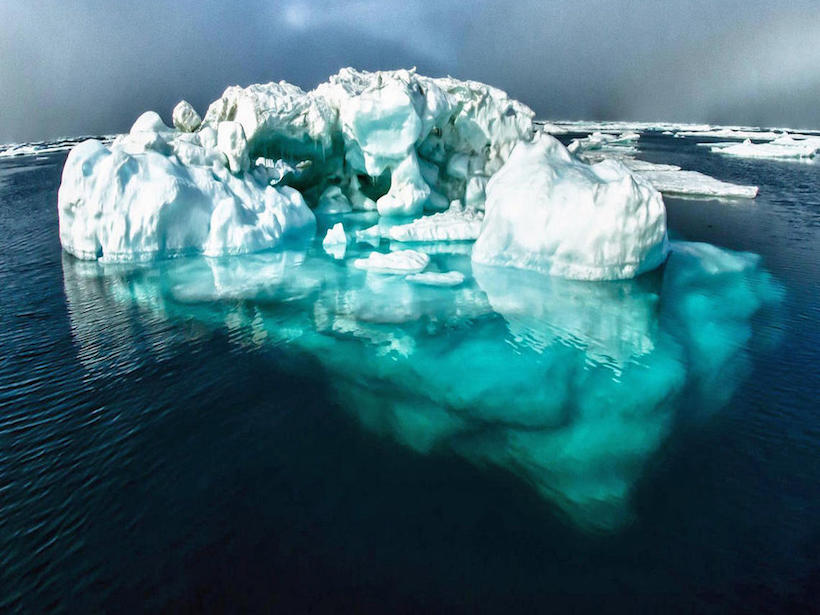 Just a few tens of thousands of years ago—a blink in geologic time—ice sheets covered a wide swath of the planet. Researchers have now determined precisely the cadence at which one of those ice masses retreated and disgorged icebergs into the Pacific Ocean, events that likely triggered substantial climatic changes.

The ice sheets of Greenland and Antarctica are conspicuous features on Earth today (and potential contributors to tens of meters of sea level rise). But other large ice sheets also existed in the not-too-distant past, said Maureen Walczak, a paleoceanographer at Oregon State University in Corvallis. “There were other ice sheets that are now extinct.”

Around 18,000 years ago, carbon dioxide levels in Earth’s atmosphere increased, and the resulting uptick in temperature spelled the demise of the Laurentide and Cordilleran Ice Sheets. “That [temperature change] seems to have triggered the permanent destabilization of the large temperate ice sheets,” said Walczak.

However, the Laurentide and Cordilleran Ice Sheets exhibited several episodes of waning before their lasts gasps, scientists have shown. Both ice sheets periodically retreated as their marine-terminating glaciers disgorged enormous icebergs into the oceans. Evidence for these discharges lies below the seafloor: layers of boulders, pebbles, and sand, material dredged from the land that hitched a ride to the sea. “It’s floating out in icebergs and then melting out of those icebergs and raining down to the deep sea,” said Walczak. “That’s the only way to get that material there.”

These discharges have been particularly well studied in the Atlantic Ocean, where they’re known as Heinrich events. Researchers have long believed that there’s a connection between Heinrich events and their Pacific Ocean counterparts, said Walczak.

“The direction of the connection has always been [that] the North Atlantic is driving everything.”

“But the direction of the connection has always been [that] the North Atlantic is driving everything.”

Now, Walczak and her collaborators have pored over a 90-meter-long sediment core from the Gulf of Alaska to investigate that assumption. Four intervals within the core stood out for their high accumulation rates of coarse material, Walczak and her team found. “We know that when we find these rocky debris layers, there must have been a lot of icebergs in the ocean overhead,” said Walczak.

The researchers termed these episodes Siku events after the Inupiat/Inuit word for ice. Using 14C dating of tiny shelled organisms known as foraminifera within the sediment core, Walczak and her colleagues age dated the four Siku events with a precision of a few hundred years. The earliest Siku event that the team measured occurred about 56,000 years ago, and the most recent one was about 17,000 years ago.

When Walczak and her collaborators compared the timing of Siku events with Heinrich events, they found that the Pacific events consistently predated their Atlantic counterparts by roughly 1,300 years. That was a big surprise, because it’s long been believed that changes in the Atlantic—such as shifts in the Atlantic Meridional Overturning Circulation—triggered changes in the Pacific, said Alan Mix, a paleoceanographer at Oregon State University and one of the study’s coauthors. “We’ve skewered those assumptions,” Mix told Eos in an email.

Instead, it appears that Siku events are driving Heinrich events, the team concluded. That discovery has important implications for understanding the origin of climatic changes—such as pronounced increases in atmospheric carbon dioxide levels and Antarctic warming—during the Pleistocene, the researchers suggested.

“They make a really compelling case for the timeline.”

These results “lay the record straight” about periods of retreat of the Cordilleran Ice Sheet, said Sidney Hemming, a geologist at Lamont-Doherty Earth Observatory in Palisades, N.Y., not involved in the research. “They make a really compelling case for the timeline.”

The findings were published in early October in Science.

Walczak and her collaborators are currently doing fieldwork offshore of Oregon and Washington, where meltwater from the southern edge of the Cordilleran Ice Sheet flowed into the Pacific Ocean. Understanding what caused the Cordilleran Ice Sheet to repeatedly wane has applications to modern-day climate science, said Walczak. “The state that the Cordilleran was in at the end of the last ice age, that state of flickering stability, that’s a good analogue for the state that Greenland and West Antarctica are in today.”