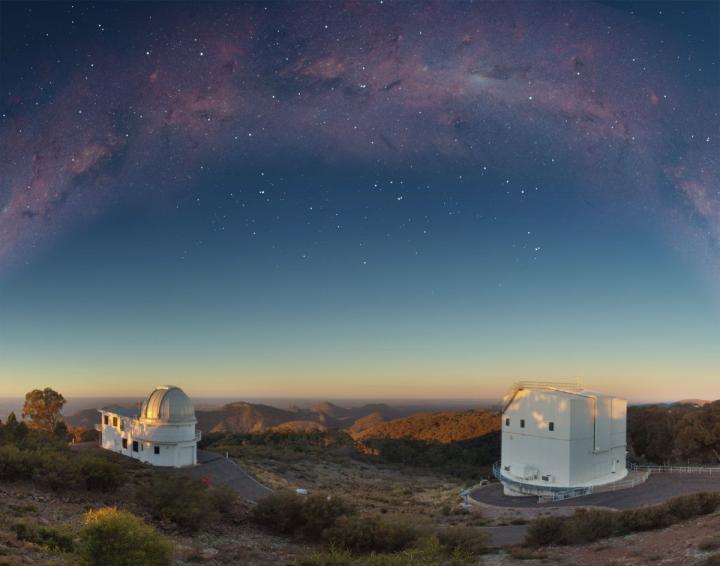 A small team of astronomers have found a new way to ‘see’ the elusive dark matter haloes that surround galaxies, with a new technique 10 times more precise than the previous-best method. The work is published in Monthly Notices of the Royal Astronomical Society.

Scientists currently estimate that up to 85% of the mass in the universe is effectively invisible. This ‘dark matter’ cannot be observed directly, because it does not interact with light in the same way as the ordinary matter that makes up stars, planets, and life on Earth.

So how do we measure what cannot be seen? The key is to measure the effect of gravity that the dark matter produces.

Pol Gurri, the PhD student at Swinburne University of Technology who led the new research, explains: “It’s like looking at a flag to try to know how much wind there is. You cannot see the wind, but the flag’s motion tells you how strongly the wind is blowing.”

The new research focuses on an effect called weak gravitational lensing, which is a feature of Einstein’s general theory of relativity. “The dark matter will very slightly distort the image of anything behind it,” says Associate Professor Edward Taylor, who was also involved in the research. “The effect is a bit like reading a newspaper through the base of a wine glass.”

Weak gravitational lensing is already one of the most successful ways to map the dark matter content of the Universe. Now, the Swinburne team has used the ANU 2.3m Telescope in Australia to map how gravitationally lensed galaxies are rotating. “Because we know how stars and gas are supposed to move inside galaxies, we know roughly what that galaxy should look like,” says Gurri. “By measuring how distorted the real galaxy images are, then we can figure out how much dark matter it would take to explain what we see.”

The new research shows how this velocity information enables a much more precise measurement of the lensing effect than is possible using shape alone. “With our new way of seeing the dark matter,” Gurri says, “we hope to get a clearer picture of where the dark matter is, and what role it plays in how galaxies form.”

Future space missions such as NASA’s Nancy Grace Roman Space Telescope and the European Space Agency’s Euclid Space Telescope are designed, in part, to make these kinds of measurements based on the shapes of hundreds of millions of galaxies. “We have shown that we can make a real contribution to these global efforts with a relatively small telescope built in the 1980s, just by thinking about the problem in a different way,” adds Taylor.