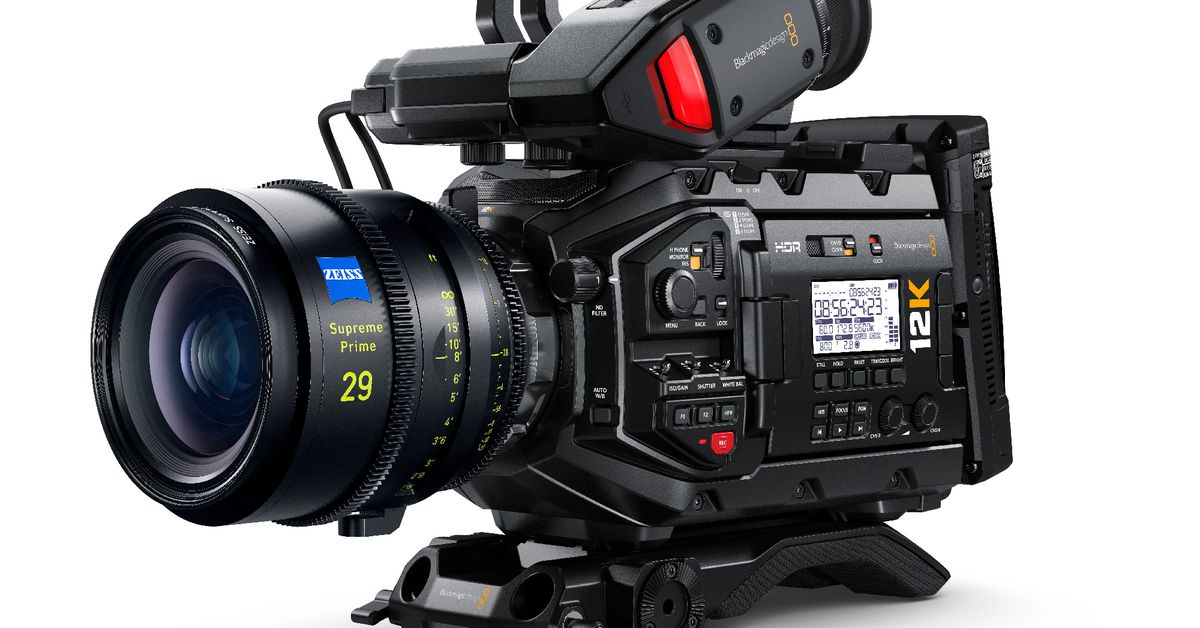 Shooting footage for IMAX movies has never been particularly easy or cheap. Back in the good old days, IMAX required 70mm film, which was twice the width of 35mm film  used in typical cinema and still photography cameras. It was heavy, cumbersome, and extremely expensive. Even with the move to digital, capturing sufficient resolution and detail to fill floor-to-ceiling screens required cameras and lenses that easily climb into six-figure price ranges.

Earlier this year, however, camera maker Blackmagic introduced its Ursa Mini Pro 12K camera, which is one of our Best of What’s New award winners this year. Its $9,995 price tag seems tall until you consider what it can do and the other models with which it competes. As the name suggests, the Ursa Mini Pro can shoot 12K footage at 60 frames per second. That’s 60 images every second, each with 80 megapixels of resolution (12,288 x 6,480), easily enough detail to fill up even the massive IMAX theaters.

Sometimes you need more resolution than the iPhone camera can provide. (Blackmagic/)

Using the new camera is Australian filmmaker Stephen Amezdroz, who is currently working on a film called Koala. It is slated to be the first IMAX movie captured in 12K, which roughly matches the perceived resolution of images captured on 70mm film.

“The irony of this whole thing is whilst 80 percent of the koala population has been under threat in the last 12 months or so,” says Amezdroz. “The region I’m in has an overabundance.” He’s shooting in Victoria, in the south east part of the country. Koalas were once a fundamental part of the Australian fury trade, but now the population has rebounded and tourists are lured to the area to view its wildlife. Amezdroz’s film hopes to encourage tourists to visit responsibly in a way that respects the animals habitat. Part of accomplishing that task involves getting those adorable animals up on the huge IMAX screens.

Screens as large as those found in IMAX theaters bring their own unique shooting challenges. “Because of the size of the screen, you can’t have objects entering one side of the frame and exiting on the other side,” he says. “It takes too long. Or they move so quickly that the audience ends up with whiplash. It’s similar if something enters at the top of the frame and moves down.”

That frame placement also presents challenges when it comes to filling up the entire picture. “You have a sweet spot in the center. Your eye line should be a third of the way up the screen, so you frame on that basis,” he says. That can leave extra room at the top that needs filling. Sometimes filmmakers stretch the content at the top of the frame or use graduated neutral density filters to fade the top of the image to darkness and create a smooth transition. The extra resolution that comes with shooting 12K gives more opportunity to stretch and manipulate the image without distorting the picture.

According to Amezdroz, fades are important for IMAX films when it comes to both the frame and transitions between scenes. A slight vignette around the edges of the image helps the screen blend into its environment without creating a harsh boundary between the picture and the room. He also prefers dissolve transfers where the images gradually fade into one another to prevent harsh transitions between shots. “Everything in your peripheral vision changes and ‘whack’—it’s jarring,” he says.

But before the koalas can show up on-screen, someone needs to capture footage of them. Shooting in 12 means huge file sizes, which take up lots of storage. The Ursa Mini Pro 12K can compress footage down by 18 times and still achieve usable results that are much smaller and editable on a modern laptop. Amezdroz, however, prefers to shoot nearly uncompressed to maintain every last bit of detail. As a result, he has to be extremely selective about how long the shots he captures are and what takes he chooses to upload from the camera.

Once the footage is uploaded, shooting in 12K allows for some wiggle room when it comes to framing. Shooting at 4K means the frame is locked in and cropping reduces the overall quality. At 12K, there’s ample room around the edges to “push in” and reframe a scene a bit without sacrificing detail or sharpness.

Still, because the camera itself is so small and portable, Amezdroz feels comfortable running it with a small crew or even alone. And while the $10,000 price tag isn’t cheap, it’s considerably less than the other options out there that command several times that.

Amezdroz has production factors to finalize before going into another season of shooting with the koalas—babies (called joeys) start to arrive in August. But, even with the camera and crew sorted, he still needs the animals themselves to cooperate. “The bloody things sleep for 20 hours a day and are awake for four hours a day,” he laughs. “Thanks heavens some of that is during magic hour.”