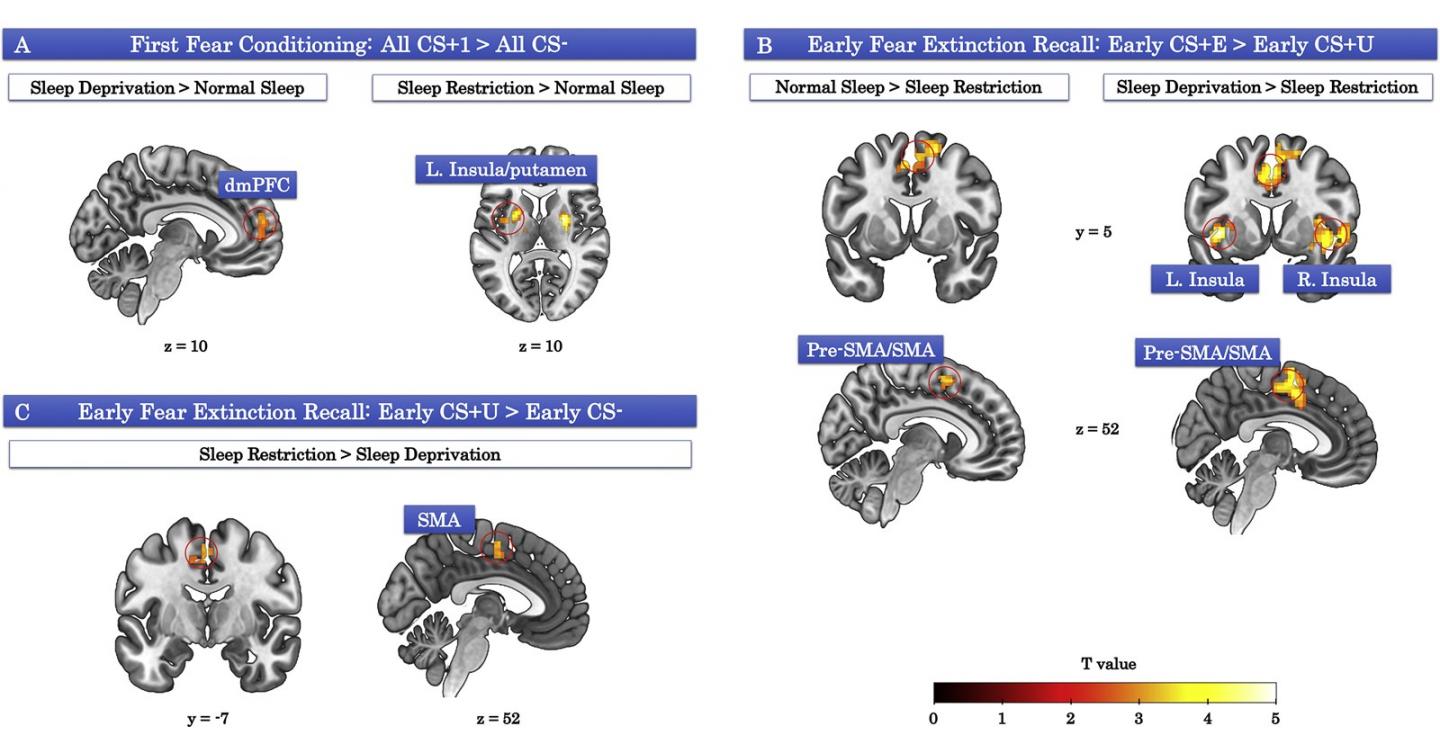 Philadelphia, November 11, 2020 – Sleep is crucial for consolidating our memories, and sleep deprivation has long been known to interfere with learning and memory. Now a new study shows that getting only half a night’s sleep – as many medical workers and military personnel often do – hijacks the brain’s ability to unlearn fear-related memories. That might put people at greater risk of conditions such as anxiety or posttraumatic stress disorder.

The study appears in Biological Psychiatry: Cognitive Neuroscience and Neuroimaging, published by Elsevier.

The researchers, led by Anne Germain, PhD, at the University of Pittsburgh and Edward Pace-Schott, PhD, at Harvard Medical School and Massachusetts General Hospital, studied 150 healthy adults in the sleep laboratory. One third of subjects got normal sleep, one third were sleep restricted, so they slept only the first half the night, and one third were sleep deprived, so they got no sleep at all. In the morning, all the subjects underwent fear conditioning.

“Our team used a three-phase experimental model for the acquisition and overcoming of fearful memories while their brains were scanned using functional magnetic resonance imaging,” said Dr. Pace-Schott. In the conditioning paradigm, subjects were presented with three colors, two of which were paired with a mild electric shock. Following this fear conditioning, the subjects underwent fear extinction, in which one of the colors was presented without any shocks to learn that it was now “safe.” That evening, subjects were tested for their reactivity to the three colors, a measure of their fear extinction recall, or how well they had “unlearned” the threat.

Surprisingly, people who got no sleep lacked the brain activation in fear-related areas during fear conditioning and extinction. During the extinction recall 12 hours later, their brain activity looked more similar to those with normal sleep, suggesting that a limited night of sleep may be worse than none at all.

The researchers hypothesize that sleeping only half the night results in a loss of rapid eye movement (REM) sleep, which has been shown to be important for memory consolidation and usually happens toward the end of a normal sleep period.

Dr. Carter said the study used “noninvasive brain imaging to give us a novel window into how sleep deprivation disrupts the normal fear extinction mechanisms and potentially increases vulnerability to posttraumatic stress symptoms.”

“Medical workers and soldiers often have curtailed or interrupted sleep rather than missing an entire night’s sleep,” Dr. Pace-Schott said. “Our findings suggest that such partially sleep-deprived individuals might be especially vulnerable to fear-related conditions such as posttraumatic stress disorder.”

Copies of this paper are available to credentialed journalists upon request; please contact Rhiannon Bugno at BPCNNI@sobp.org or +1 254 522 9700. Journalists wishing to interview the authors may contact Edward Pace-Schott, PhD, at epace-schott@mgh.harvard.edu or +1 508 523 4288.

The authors’ affiliations and disclosures of financial and conflicts of interests are available in the article.

Cameron S. Carter, MD, is Professor of Psychiatry and Psychology and Director of the Center for Neuroscience at the University of California, Davis. His disclosures of financial and conflicts of interests are available here.

Biological Psychiatry: Cognitive Neuroscience and Neuroimaging is an official journal of the Society of Biological Psychiatry, whose purpose is to promote excellence in scientific research and education in fields that investigate the nature, causes, mechanisms and treatments of disorders of thought, emotion, or behavior. In accord with this mission, this peer-reviewed, rapid-publication, international journal focuses on studies using the tools and constructs of cognitive neuroscience, including the full range of non-invasive neuroimaging and human extra- and intracranial physiological recording methodologies. It publishes both basic and clinical studies, including those that incorporate genetic data, pharmacological challenges, and computational modeling approaches. The 2019 Impact Factor score for Biological Psychiatry: Cognitive Neuroscience and Neuroimaging is 5.335. http://www.sobp.org/bpcnni

Elsevier is a global information analytics business that helps scientists and clinicians to find new answers, reshape human knowledge, and tackle the most urgent human crises. For 140 years, we have partnered with the research world to curate and verify scientific knowledge. Today, we’re committed to bringing that rigor to a new generation of platforms. Elsevier provides digital solutions and tools in the areas of strategic research management, R&D performance, clinical decision support, and professional education; including ScienceDirect, Scopus, SciVal, ClinicalKey and Sherpath. Elsevier publishes over 2,500 digitized journals, including The Lancet and Cell , more than 39,000 e-book titles and many iconic reference works, including Gray’s Anatomy. Elsevier is part of RELX, a global provider of information-based analytics and decision tools for professional and business customers. http://www.elsevier.com