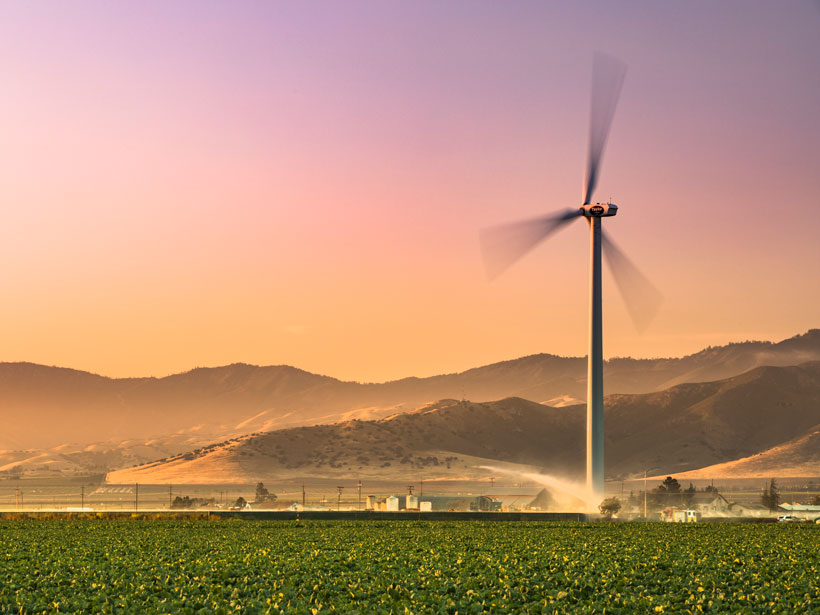 The United States and China are the largest economies in the world, producing and consuming much more food, energy, and water (FEW) resources than other countries. Consequently, these countries exert substantial impacts on the environment and climate and thus on global sustainability.

The two nations have, of course, taken very different paths to where they are today: The United States is a relatively low population density society with mature, mechanized food production and technologically advanced waste management that have developed as urbanization has progressed steadily yet gradually over the past 150 years. In contrast, high population density China has experienced rapid population migration of roughly 600 million people from rural to urban areas over a 40-year period. This fast-pace urbanization generates considerable uncertainty, and the lack of widespread and comprehensive mechanized infrastructure to replace physical labor is a major challenge [Koleski, 2017; U.S. Department of Agriculture (USDA), 2016]. As the United States exports large amounts of commodity food products and uses grain-based materials as bioenergy sources, China is transitioning from self-sufficiency in agricultural food production to dependency on imports [Clapp, 2017; USDA, 2016; Mukhopadhyay et al., 2018].

Despite these differences, China and the United States share common challenges and objectives with respect to FEW resources and services, such as their heavy reliance on fossil fuels and their efforts to improve water resource management and develop “green” cities. In both countries, public awareness about the effects of carbon emissions and about the importance of food quality, freshness, and safety is increasing [Cui and Shoemaker, 2018].

Geopolitical and ideological barriers are increasingly restricting research collaborations between the United States and China [Silver et al., 2019], but these existing commonalities provide opportunities for tackling grand challenges in FEW research not just domestically but also globally. Since 2006, a partnership among U.S. and Chinese academic institutions and researchers committed to transdisciplinary activities has worked eagerly to capitalize on those opportunities.

Food, energy, and water resources are essential for human well-being, and the systems by which these resources are produced, refined, distributed, and consumed are inextricably intertwined [Yuan and Lo, 2020]. The complex interactions among these systems are often referred to as the FEW nexus. For example, energy production and food production, especially where irrigation is required, compete for often limited water resources; meanwhile, energy is, of course, needed to pump water for irrigation, to treat wastewater, and to process and transport food.

Grand challenges such as climate change, population growth, and urbanization are all coupled and are together threatening the security and services of FEW systems at an accelerating rate. Figure 1 depicts a conceptual framework illustrating how climate change and population growth interact with the FEW nexus.

These challenges will become particularly severe in highly urbanized and densely populated countries by 2050. For example, the availability of FEW resources in megacities mostly depends upon supply chains, and losses of local provisioning of FEW resources endanger these cities’ sustainability. These losses also cause social equity and justice problems related to the unequal distribution of the costs and benefits of FEW resources and to inconsistencies between public regulatory policies and private decisions about FEW resources that can disenfranchise large portions of the population.

Noteworthy in this discussion, from an input-output perspective, are the environmental and sociological effects of changing FEW systems, ranging from demographic and socioeconomic changes to effects on waste recycling, landfills, and water and air quality [Sinha et al., 2017]. It is very difficult to clarify or predict how demographic change and climate migration affect FEW systems. Ultimately, beneficial ecosystem services depend on balancing consumption and production of FEW resources, although loss of biodiversity, pollutant releases, critical disruptions in nutrient cycling, and intensified land use are increasingly challenging the resilience and functioning of human-sustaining FEW systems.

Translating science and technology research findings into solutions to FEW problems is an enormous challenge. For example, climate change influences food supply chains, energy consumption, and water availability while simultaneously altering the ability of ecosystems to meet human FEW demands and societal behaviors meant to enhance ecosystem services. How these dynamics restructure supply chain models, business decisions, public actions, and regulatory oversight is poorly understood and generally lags behind progress in science and technology. Without intensified international collaboration and innovation, we may soon reach tipping points where environmental damage and ecosystem losses cannot be restored, with dire consequences for the fast-growing world population [Food and Agriculture Organization of the United Nations, 2014].

Within the framework shown in Figure 1 are not only environmental impacts of FEW systems but also juxtaposed opportunities to mitigate and adapt to the challenges in support of global sustainability. The experiences of and lessons learned through the China-U.S. Joint Research Center for Ecosystem and Environmental Change (JRCEEC) provide a good model of how to collaborate to study the problems and implications of changing FEW systems as well as potential solutions to challenges that promote sustainable development.

The JRCEEC was founded in 2006 in Beijing as a grassroots, ad hoc research partnership to promote scientific exchange and create a research network among investigators studying greenhouse gas emissions, climate change and its implications, and bioenergy. The JRCEEC partnership includes research groups at the University of Tennessee, Purdue University, Oak Ridge National Laboratory, the Chinese Academy of Sciences, the University of Science and Technology of China, and Nanjing University. Over its 15-year history, JRCEEC has engaged roughly 7,000 researchers, students, and policymakers, promoting collaboration and friendship among U.S. and Chinese participants. In 2014, JRCEEC created a transdisciplinary doctoral program focused on graduate training and research with respect to the environment, energy, and food. The doctoral program is jointly funded by the China Scholarship Council and the University of Tennessee and has recruited more than 40 students to pursue degrees in the United States.

Since its inception, JRCEEC has emphasized systematic analysis of human-nature interactions, aiming to form transdisciplinary research teams to study the evolving nature of science and policy drivers in the two countries. Initial exchanges in the collaboration focused on carbon dynamics, bioenergy production, and ecosystem restoration, issues that intersect crucially with FEW systems.

To further develop an integrated and coordinated research network, JRCEEC, in May 2017, initiated a pilot project called the Food, Energy, Water Systems Transdisciplinary Environmental Research Network (FEWSTERN) under the joint support of the U.S. National Science Foundation (NSF) and the National Natural Science Foundation of China. The project has brought together large groups of U.S. and Chinese researchers, industry leaders, and government representatives, charged with identifying grand challenges related to the FEW nexus. FEWSTERN identified the dependence of FEW networks on multisectoral interactions (Figure 2) and showed that transdisciplinary perspectives are needed to coordinate global understanding of FEW impacts on sustainable development.

FEWSTERN focused on environmental topics that directly intersect with essential elements of the production, distribution, consumption, and waste recycling pipelines within FEW systems. Waste has been of particular interest because great opportunities exist to provision societies through the reuse of waste materials and through implementation of waste avoidance and conversion technologies.

The large amount of waste in the food supply chain reduces opportunities to improve food security, economic growth, and environmental health, and it hinders realization of sustainable development goals.

Throughout the food supply chain (i.e., from farm to table), more than 30% of food is lost or wasted, equivalent to about 1.3 billion tons per year globally [Feng et al., 2020]. The large amount of waste reduces opportunities to improve food security, economic growth, and environmental health, and it hinders realization of the United Nations Sustainable Development Goals (SDGs) regarding responsible production and consumption and reducing hunger.

However, much of the resulting “waste” is still available for use as animal feed or as compost and biochar in farming, for conversion into construction materials (e.g., lightweight board, insulation materials, cement filler), and for bioenergy recovery [Polasky et al., 2019]. And expansion of urban agriculture, direct farm-to-table preferences, and efforts to advance green infrastructure and artificial intelligence in agriculture present enormous opportunities to increase crop yield, reduce application of agrochemicals, improve soil health and productivity, and intensify ecosystem services. Such developments will reduce waste generation and pollution and will minimize and redirect water use and storage. For instance, reuse of industrial and domestic gray water for irrigation, groundwater recharge, sanitation, and constructed landscapes can occur at a scale far beyond current use.

Capitalizing on these advances will require the involvement and acceptance of producers, consumers, and policymakers. Furthermore, although many of these opportunities exist in urban areas, their implementation depends on improving rural infrastructure (e.g., transportation, clean water supplies, and broadband access) and urban-rural linkages across space and sectors as well as on social and technical policies regulating the supply and value chains of FEW resources between rural and urban systems.

Many questions remain to be answered before such implementations can occur in both the United States and China, including the following: What are the barriers to beneficial reuse of treated wastewater and sewage sludge (e.g., for irrigation water, fertilizers, and biogas) in food and energy production, and how can rural and urban FEW systems be ecologically and digitally integrated to improve economic efficiency and regional sustainability? These are issues and questions that scientists and engineers involved with JRCEEC will continue to address.

Recognizing that a single, global ecosystem of FEW resources and services is developing, the U.S.-China collaboration can catalyze realization of all 17 SDGs by bringing together complementary policy, economic, and scientific resources and by influencing the actions of other countries in the context of global sustainability.

Crucial insights into establishing and fostering successful international transdisciplinary collaborations have emerged from the China-U.S. Joint Research Center for Ecosystem and Environmental Change.

Crucial insights into the intricacies of establishing and fostering successful international transdisciplinary collaborations have emerged throughout the course of JRCEEC’s development. First, respect for individuals, for different research processes, and for the different national systems within which research is conducted is critical. This respect engenders trust that research can be jointly accomplished for mutual benefit.

Second, it is important to listen to the concerns of all collaborators and to ensure they are understood clearly because research problems and reward systems differ in different nations. For example, a hypothesis-driven fundamental research approach is not necessarily equivalent to a mission-directed approach to problem solving. And given frequent language barriers, discussions about defining research goals, communicating experimental designs, drawing meaningful conclusions, assessing the impacts of outcomes, and determining avenues to disseminate findings can be easily confounded.

JRCEEC and FEWSTERN have mounted successful FEW nexus research initiatives between the United States and China since 2006. In 2020, this binational model was expanded to include participants from other countries (e.g., Argentina, Brazil, Cambodia, Chile, Colombia, Czech Republic, Guatemala, Netherlands, Tanzania, Uganda, and Uruguay) through the implementation of a new NSF-funded project called the International Research Coordination Network for Creating Transdisciplinary Nodes of Food-Energy-Water to Support Sustainable Urban Systems, or FEWSUS. FEWSUS aims to create a robust global research effort that capitalizes on the lessons learned through JRCEEC and FEWSTERN and charts a new path forward in promoting urban sustainability and resiliency by enhancing a sustainable nexus of FEW systems.