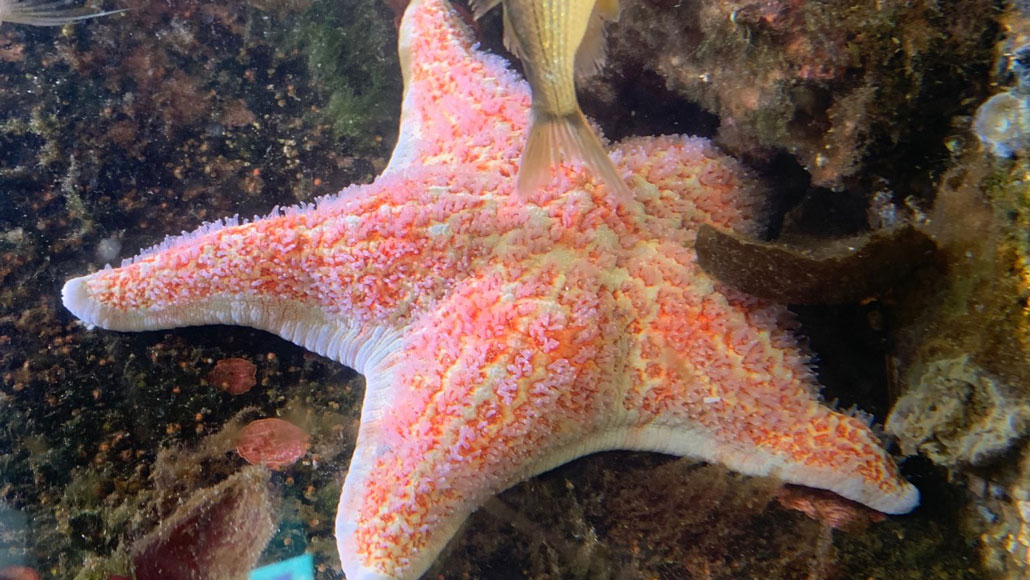 The mysterious culprit behind a deadly sea star disease is not an infection, as scientists once thought.

Instead, multiple types of bacteria living within millimeters of sea stars’ skin deplete oxygen from the water and effectively suffocate the animals, researchers report January 6 in Frontiers in Microbiology. Such microbes thrive when there are high levels of organic matter in warm water and create a low oxygen environment that can make sea stars melt in a puddle of slime.

Sea star wasting disease — which causes lethal symptoms like decaying tissue and loss of limbs — first gained notoriety in 2013 when sea stars living off the U.S. Pacific Coast died in massive numbers. Outbreaks of the disease had also occurred before 2013, but never at such a large scale.

Scientists suspected that a virus or bacterium might be making sea stars sick. That hypothesis was supported in a 2014 study that found unhealthy animals may have been infected by a virus (SN: 11/19/14). But the link vanished when subsequent studies found no relationship between the virus and dying sea stars, leaving researchers perplexed (SN: 5/5/16).

The new finding that a boom of nutrient-loving bacteria can drain oxygen from the water and cause wasting disease “challenges us to think that there might not always be a single pathogen or a smoking gun,” says Melissa Pespeni, a biologist at the University of Vermont in Burlington who was not involved in the work. Such a complex environmental scenario for killing sea stars “is a new kind of idea for [disease] transmission.”

There were certainly many red herrings during the hunt for why sea stars along North America’s Pacific Coast were melting into goo, says Ian Hewson, a marine biologist at Cornell University. In addition to the original hypothesis of a viral cause for sea star wasting disease — which Hewson’s team reported in 2014 in Proceedings of the National Academy of Sciences but later disproved — he and colleagues analyzed a range of other explanations, from differences in water temperature to exposing the animals to bacteria. But nothing reliably triggered wasting.

Then the researchers examined the types of bacteria living with healthy sea stars compared with those living among the animals with wasting disease. “That was when we had our aha moment,” says Hewson.

Types of bacteria known as copiotrophs, which thrive in environments with lots of nutrients, were present around the sea stars at higher levels than normal either shortly before the animals developed lesions or as they did so, Hewson and colleagues found. Bacterial species that survive only in environments with little to no oxygen were also thriving. In the lab, the sea stars began wasting when the researchers added phytoplankton or a common bacterial-growth ingredient to the warm water tubs those microbes and sea stars were living in.

Experimentally depleting oxygen from the water had a similar effect, causing lesions in 75 percent of the animals, while none succumbed in the control group. Sea stars breathe by diffusing oxygen over small external projections called skin gills, so the lack of oxygen in the wake of flourishing copiotrophs leaves sea stars struggling for air, the data show. It’s unclear how the animals degrade in low oxygen conditions, but it could be due to massive cell death.

Although the disease isn’t caused by a contagious pathogen, it is transmissible in the sense that dying sea stars generate more organic matter that spur bacteria to grow on healthy animals nearby. “It’s a bit of a snowball effect,” Hewson says.

The team also analyzed tissues from sea stars that had succumbed in the 2013 mass die-off — which followed a large algal bloom on the U.S. West Coast — to see if such environmental conditions might explain that outbreak. In fast-growing appendages that help them move, the sea stars that perished had high amounts of a form of nitrogen found in low oxygen conditions — a sign that those animals may have died from a lack of oxygen.

The problem may get worse with climate change, Hewson says. “Warmer waters can’t have as much oxygen [compared with colder water] just by physics alone.” Bacteria, including copiotrophs, also flourish in warm water.

But pinpointing the likely cause could help experts better treat sick sea stars in the lab, Hewson says. Some techniques include increasing the oxygen levels in a water tank to make the gas more easily available to sea stars or getting rid of extra organic matter with ultraviolet light or water exchange.

“There’s still a lot to figure out with this disease, but I think [this new study] gets us a long way to understanding how it comes about,” Pespeni says.