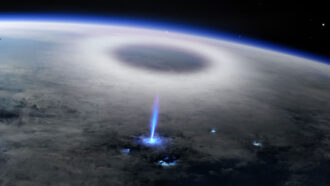 Scientists have finally gotten a clear view of the spark that sets off an exotic type of lightning called a blue jet.

Blue jets zip upward from thunderclouds into the stratosphere, reaching altitudes up to about 50 kilometers in less than a second. Whereas ordinary lightning excites a medley of gases in the lower atmosphere to glow white, blue jets excite mostly stratospheric nitrogen to create their signature blue hue.

Blue jets have been observed from the ground and aircraft for years, but it’s hard to tell how they form without getting high above the clouds. Now, instruments on the International Space Station have spotted a blue jet emerge from an extremely brief, bright burst of electricity near the top of a thundercloud, researchers report online January 20 in Nature.

Understanding blue jets and other upper-atmosphere phenomena related to thunderstorms, such as sprites (SN: 6/14/02) and elves (SN: 12/23/95), is important because these events can affect how radio waves travel through the air — potentially impacting communication technologies, says Penn State space physicist Victor Pasko, who was not involved in the work.

Cameras and light-sensing instruments called photometers on the space station observed the blue jet in a storm over the Pacific Ocean, near the island of Nauru, in February 2019. “The whole thing starts with what I think of as a blue bang,” says Torsten Neubert, an atmospheric physicist at the Technical University of Denmark in Kongens Lyngby. That “blue bang” was a 10-microsecond flash of bright blue light near the top of the cloud, about 16 kilometers high. From that flashpoint, a blue jet shot up into the stratosphere, climbing as high as about 52 kilometers over several hundred milliseconds.

The spark that generated the blue jet may have been a special kind of short-range electric discharge inside the thundercloud, Neubert says. Normal lightning bolts are formed by discharges between oppositely charged regions of a cloud — or a cloud and the ground — many kilometers apart. But turbulent mixing high in a cloud may bring oppositely charged regions within about a kilometer of each other, creating very short but powerful bursts of electric current, Neubert says. Researchers have seen evidence of such high-energy, short-range discharges in pulses of radio waves from thunderstorms detected by ground-based antennas.