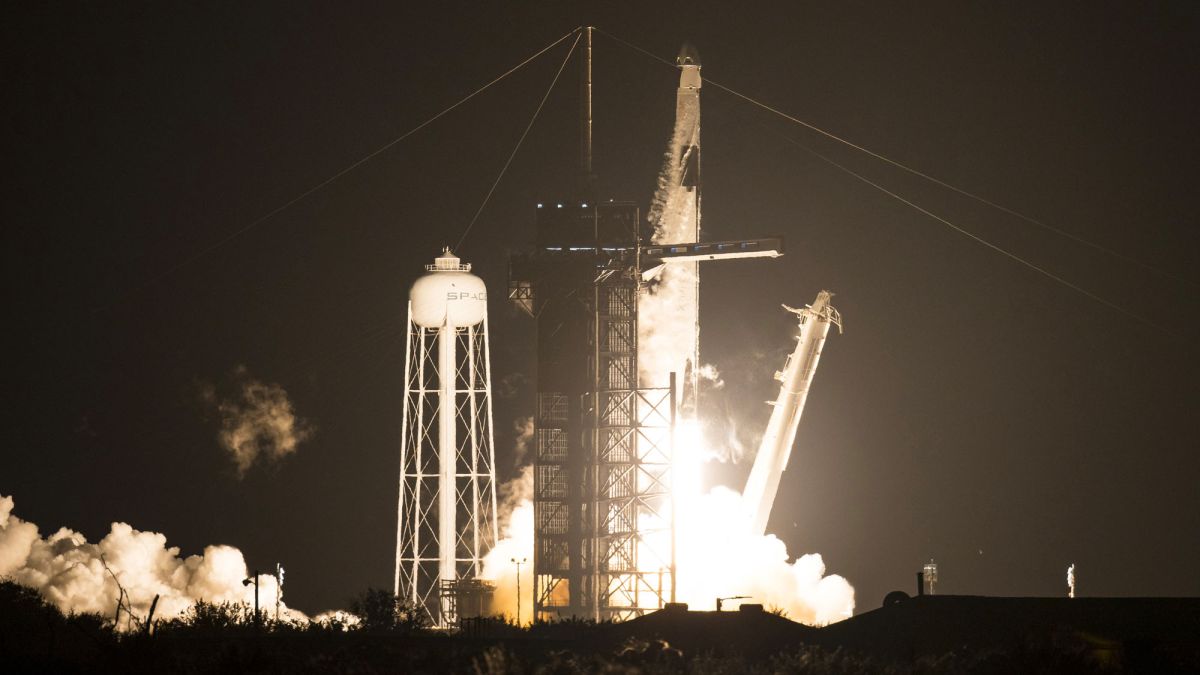 The rocket lifted off from NASA’s historic Pad 39 here at 7:27 p.m. EDT (0027 GMT on Nov. 16) carrying four astronauts in a Crew Dragon capsule to orbit, and then returned to Earth for a drone-ship landing in the Atlantic Ocean.

Going into the launch, the only concern was the weather. Rough seas at the recovery zone prevented the Dragon from getting off the ground on its original launch date of Saturday. Teams decided to delay the flight 24-hours in hopes that the drone ship “Just Read the Instructions” would arrive at the recovery zone in time for the launch.

The gumdrop-shaped capsule’s flight was one for the history books. It marked several firsts, including the first-long duration crew mission to blast off from the space coast as well as the first operational commercial crew mission to launch as part of NASA’s Commercial Crew Program.

With the launch of a different Crew Dragon capsule in May, known as the Demo-2 mission, NASA and SpaceX helped usher in a new era in spaceflight — one led by commercial companies.

Nearly a decade ago, on July 21, 2011, the Space Shuttle Atlantis touched down for the final time, ending the storied career of NASA’s fleet of space shuttles. The winged family of orbiters were NASA’s workhorses for decades. First flying in 1981, and continuing service until 2011, the space shuttle helped build the International Space Station, which celebrated its 20th anniversary earlier this month.

But the shuttle’s time was limited, and just before its retirement NASA decided that it wanted to hand over the reigns to private industry and entrusted two companies to ferry their astronauts to and from space.

NASA selected SpaceX and Boeing as its future space taxi providers. These two companies have worked to build a spacecraft capable of safely carrying crew, under contracts worth a total of $6.8 billion. Once operational, their vehicles — SpaceX’s Crew Dragon and Boeing’s CST-100 Starliner — will be NASA’s primary means of transporting astronauts to space.

Ever since the final shuttle flight touched down, every astronaut bound for the orbital outpost has hitched a ride on a Russian Soyuz spacecraft. Now, this flight marks the first official operational flight of the Crew Dragon capsule. During the lead up to today’s flight, NASA certified the spacecraft to carry astronauts to and from the space station on a regular basis.

The four astronauts departed from historic launch pad 39A at NASA’s Kennedy Space Center in Florida. This is the same launch pad that the Apollo 11 astronauts launched to the moon from and also hosted the first and last space shuttles launches. In fact, a total of 82 shuttle launches left the planet from that pad.

That heritage is also represented in the mission’s patch. There are no names or flags on the patch. Instead it has symbols on the lower edge to pay tribute to the four prior U.S. spacecraft that carried astronauts ― Space Shuttle, Apollo, Gemini and Mercury.

Related: See the evolution of SpaceX’s rockets in pictures

On Sunday, the quartet of astronauts traveled to the pad approximately three hours before launch. They traveled in style, riding in white Tesla Model X electric cars that were decked out in the old NASA “worm” logo that was revived for the launch. Upon arrival, they took an elevator to the crew access arm, which stands approximately 265 feet (81 meters) above the launch pad, and then climbed into the capsule.

After a series of system checkouts, the closeout crew detected a potential leak in the spacecraft’s hatch. The team spent several minutes to troubleshoot this issue before they cleared the pad. According to the webcast, there could have been a small piece of debris in the hatch’s seal, which would have been removed before the crew was sealed inside. They then armed the Crew Dragon’s abort system soon after. That system is a crucial component in keeping them safe. SpaceX then began fueling the rocket with supercooled liquid oxygen and kerosene 45 minutes before liftoff.

But before the crew could fly, SpaceX had to prove that its Crew Dragon capsule could keep astronauts safe during flight. One of the lessons learned from the loss of the space shuttle Challenger in 1986 was that all future crewed vehicles would need emergency escape systems, which the shuttle did not have.

While in-flight anomalies are rare, NASA needed to ensure that, if one of SpaceX’s Falcon 9 rockets were to have an anomaly, its astronauts would still be brought home safely. As such, SpaceX demonstrated how the system worked in flight earlier this year.

Following that successful inflight abort mission, SpaceX launched two astronauts, Bob Behnken and Doug Hurley on a test flight to the ISS. During that flight, the duo put the Dragon spacecraft through its paces and spent about 10 weeks on station before splashing down in the Gulf of Mexico on Aug. 2.

While Behnken and Hurley took about 19 hours to catch up with the space station, Crew-1 will take about 27 hours to catch up with the ISS. During that time, the astronauts will get to move around a bit, get some sleep and even eat some food before arriving at the space station. The vehicle is fully autonomous, so it’s designed to fly without any human intervention. However, it has a complete control panel that the astronauts can use if necessary.

Hopkins is the mission’s commander, with Glover serving as the pilot. Walker and Noguchi will be the mission specialists. The duo were added onto the mission’s roster approximately seven months ago and did their training during the height of the pandemic.

“I’ve been pleasantly surprised with how SpaceX handled the training and everything,” Noguchi said during a preflight news briefing. “Hopper is a great leader.”

Hopkins, Walker and Noguchi are all veteran flyers, however, this flight will be Glover’s first.

“It’s hard to put into words, it’s surreal,” Glover said before the flight. “I’m excited just to go to space. We have an amazing spacecraft and are going to join an amazing team.”

The Crew-1 astronauts will be joining three people already living and working on the space station. In Oct., NASA astronaut Kate Rubins and two Russian cosmonauts Sergey Kud-Serchkov and Sergey Ryzhikov, blasted off to the orbital outpost and are ready to welcome their new crew members.

Hopkins explained during a preflight briefing Nov. 9 that the space station might be a little cramped after Crew-1’s arrival. Currently, there is a shortage of sleeping pods on the space station. That’s because historically ISS crew size has been six, and the arrival of Crew-1 will bring the orbiting lab’s population to seven. According to Hopkins, he will sleep in the Dragon until another sleeping pod arrives at the space station, which could arrive mid-mission or after the Crew-1 team returns to Earth.

There may be a shortage of sleeping pods, but by sending a crew of four astronauts, it will increase the amount of research carried out on the space station.

To that end, the Dragon capsule is carrying a bevy of research experiments to the station along with the four astronauts. Some of the experiments include a student genetics project, tests for future spacesuits and microbe-eating rocks.

Newbie spaceflyer Victor Glover will be participating in another research experiment that will help understand how spaceflight can change a spaceflyer’s immune system. Glover will collect biological samples from his body during the mission which will help researchers examine how dietary changes can affect an astronaut’s immune function as well as their own microbiome. The study, called the Food Physiology experiment will be ongoing.

About nine minutes after today’s successful liftoff, the Falcon 9’s first stage booster touched down on SpaceX’s drone ship, “Just Read the Instructions” (JRTI), which was stationed out in the Atlantic Ocean. This marked the company’s 65th landing and the 12th for this particular drone ship.

JRTI is SpaceX newest drone ship, having recently moved to the East Coast earlier this year. Along with its counterpart, “Of Course I Still Love You”, the drone ships have helped SpaceX with its reusability efforts.

SpaceX plans to reuse the booster in today’s mission on its next crewed flight, which is scheduled to launch sometime in the spring of 2021. It will carry another crew of four astronauts: NASA’s Shane Kimbrough, Megan McArthur, along with French astronaut Thomas Pesquet and Japanese astronaut Akihiko Hoshide.

Crew-1 is expected to dock with the space station Monday Nov. 16 at 11 p.m. EST (0400 GMT on Nov. 17), and you can watch their arrival live here on Space.com. They will remain parked at the orbital outpost for six months.