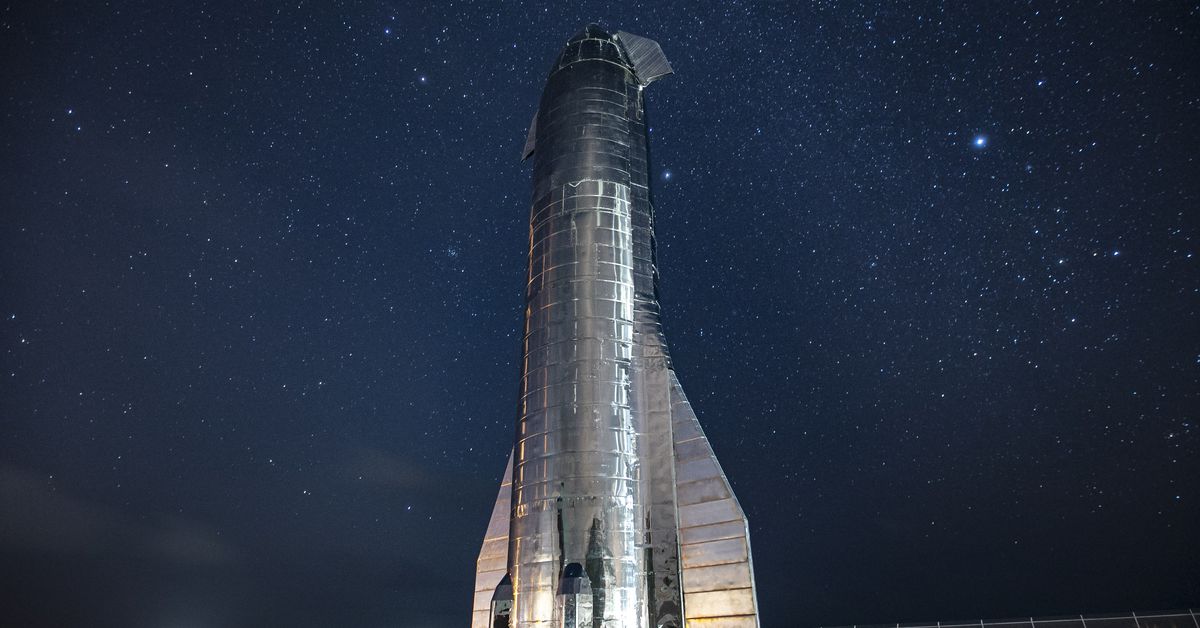 For SpaceX’s rocket scientists, Mars got a few miles closer yesterday. The company’s flagship spacecraft rose to new heights, executed a controlled freefall back toward the ground, and exploded on impact.

Company executives dream of SpaceX becoming a one-stop-shop for anyone interested in shuttling people or cargo to and from the nearby parts of the solar system. But to do so, they need a spacecraft that’s flexible enough to navigate alien atmospheres and reusable enough to make it home in one piece. Starship, they believe, is that vehicle.

Founder Elon Musk debuted the first prototype of the 160-foot tall, stainless steel behemoth last fall, and the ship’s development has continued at a breakneck pace since then. Over the summer, the fifth and six iterations of the vehicle (dubbed SN5 and SN6, SN standing for Serial Number) each hopped 500 feet into the air before touching straight back down. Today SpaceX used its eighth prototype, SN8, to conduct the vehicle’s first high altitude flight test, an essential step toward making Musk’s dreams of interplanetary transportation a reality.

In anticipation of the launch, SpaceX enthusiasts have been camped out at Boca Chica, Texas—the primary site of Starship’s development—for days. The SN8′s maiden flight could have come as early as Friday, but the launch date slid repeatedly as observers read SpaceX’s plans in the tea leaves of local road closures and Federal Aviation Administration flight restrictions. Starship nearly took off on Tuesday, but one of its engines automatically stopped the countdown with one second remaining.

At last, the colossal rocket blasted off the launchpad Wednesday evening, lifted by the might of three methane guzzling Raptor engines—a first, as the short hops had used just one. After reaching an altitude of nearly eight miles, higher than most passengers will ever travel in a commercial plane, the vehicle executed its daring landing maneuver—the “belly flop”—for the first time.

The SN8 rose for about five minutes, then cut off its engines and tipped sideways, presenting its undercarriage to the ground. Completely horizontal, it fell like a skydiver—a position designed to increase the spacecraft’s surface area—and air resistance—to slow the plunge. If and when Starship returns from orbit (or beyond), it will be coming in hot, and this “aerobraking” method will help break the gigantic spacecraft down to manageable speeds. Computers kept the SN8 level by flapping stubby fins attached to its base and nosecone. After about a minute and a half seconds of silence, the engines roared to life, righting the rocket and aiming its base back at the launchpad.

But it did not stick the landing. The rocket came in a little too hot, bursting into a fireball on the launchpad, which Musk on Twitter attributed to a low fuel tank pressure. Despite the spacecraft’s “rapid unscheduled disassembly,” as he often calls explosions, Musk celebrated the test flight’s successful ascent and belly flop, congratulating the SpaceX team on collecting all the data they needed. “Mars,” he added, “here we come!!”

And the team might not have to wait long before they get a second shot. SN8 is no more, but the assembly of SN9 is nearly complete.

And the company is designing it to go just about anywhere. Its raison d’etre, of course, is to ferry people and materials to the Red Planet and enable Musk’s endgame, a Martian city. There, the vehicle will use a similar belly flop to arrest itself as it falls through Mars’s thin atmosphere.

It may also reach the moon. NASA awarded SpaceX a $135 million contract in the spring to develop Starship as a vehicle to potentially return astronauts to the lunar surface (Blue Origin and Dynetics also received funding to build lunar landers), and the company intends to fly Japanese billionaire Yusaku Maezawa around the moon (but not land) in the mid-2020s.

SpaceX is even tapping the spaceship for terrestrial applications. The Falcon rockets cost tens of millions of dollars per launch because the upper stage returns from orbit too quickly to be recovered, but the bellyflopping Starship should be fully reusable. Musk hopes to someday launch the vehicle for $2 million a pop, which would make it the company’s the most affordable ride to space by far. At those prices, Starship could even deliver cargo for the military, or fly wealthy passengers between major cities in under an hour.

While the sky would prove no limit for a fully operational Starship, the system still has a long way to go. In addition to installing the rocket’s innards, the company next needs to assemble the Super Heavy, a massive lower stage booster that will give Starship the oomph it needs to actually get into orbit. Musk has said he hopes that might happen as early as next year. It’s an aspirational goal (he forecast an orbital flight in 2020 during the Starship unveiling last year), but keen-eyed observers have already spotted the first Super Heavy prototype being built at Boca Chica.