Spinning egg yolks hint at how concussions warp the brain 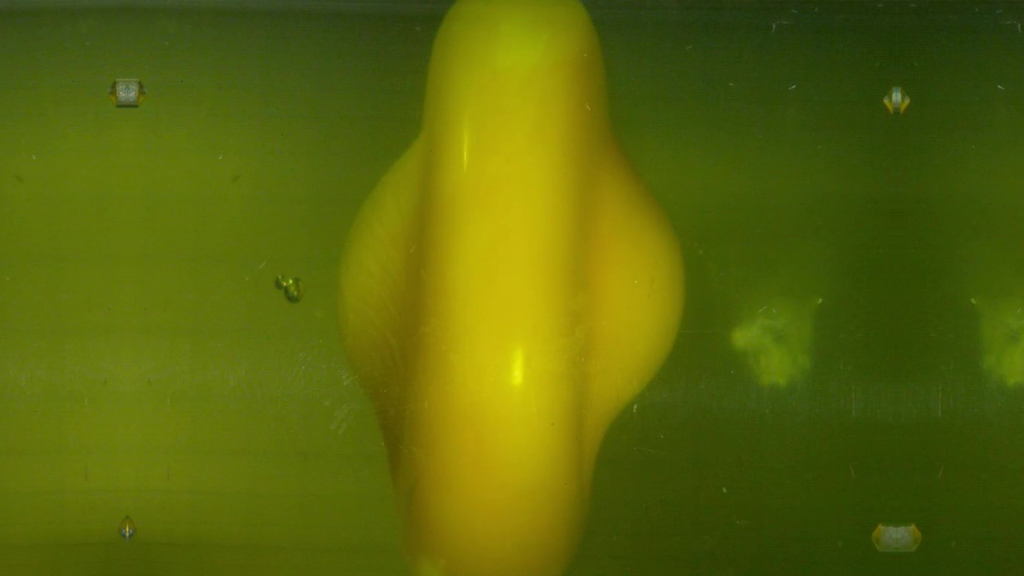 How do you study concussions without cracking any skulls? Try using an egg scrambler.

In a new study, published Jan. 19 in the journal Physics of Fluids, scientists drew inspiration from how egg scramblers mix up egg whites and yolks without first cracking the shell. The device simply rotates the uncracked egg at super-high speeds, and that force gets transmitted to the liquid inside, popping the yolk. Similarly, in most concussive brain injuries, the skull doesn’t crack, but the brain is still injured, the scientists thought.

Disclaimer: No human brains got scrambled in the making of this study. Instead, the researchers used egg yolks as a model for the human brain.

“I’d say this is a very wild comparison,” said senior author Qianhong Wu, director of the Cellular Biomechanics and Sports Science Laboratory at Villanova University in Pennsylvania. “They’re completely different systems, in terms of the material properties.” For one, egg yolks contain just one substance — yolk — while brains contain a variety of cell types arranged in complex structures, he said.

That said, eggs and human brains have a handful of key similarities, which can give some insights into the fundamental physics of concussions, he said.

Looking at the brain, we have a squidgy organ surrounded by a liquid called cerebrospinal fluid (CSF) and encased in a rigid container, the skull. An egg yolk is also made of soft, squishy matter, surrounded by liquid and encased in a hard container, the shell. Wu and his colleagues noticed these similarities and ran with them, designing experiments to see how the yolk would deform under different forces. They tested two kinds of impacts seen in concussions, including rotational impact, which causes the skull to rotate, and translational impact, which only shifts the skull in space, without rotating it.

Their lab experiments began with a trip to the grocery store, where they picked up fresh chicken eggs. To observe how force changed the yolk, they discarded the egg shell and placed the whites and yolks into a transparent container; this way they could observe the egg innards directly while still keeping them inside a rigid vessel. To test translational impact, the team dropped a 4pound (1.7 kilograms) hammer onto the container from 3.2 feet (1 meter) above it; for their rotational impact experiments, they spun the container with an electric motor, up to 64 revolutions per second.

The team recorded these tests using a high-speed camera and found that rotational impact caused the yolk to morph dramatically, while in comparison, the translational impact caused no visible change. When the container began to spin, the spherical yolk stretched out horizontally, forming an “ellipsoid.” But the most intense change occurred when the spinning slowed down. As the rate of rotation fell, the center of the yolk pinched inward, drawing the horizontal ellipsoid into the vertical plane. Within one second, the rounded shape had squashed into a flat disk.

When the rotation fully stopped, it took about a minute for the yolk to relax back into a sphere. “This large deformation obviously could cause severe damage to the yolk,” the authors noted.

The conclusion? Extreme rotational impacts could be similarly devastating to the brain. For example, when boxers get socked on the chin, their heads quickly snap backward on their neck, and then quickly slow down when the head can’t hinge back any farther. This may explain why boxers can easily faint when punched in this way, Wu noted.

While the rotational impact wreaked havoc on the yolk, the hammer-drop experiment caused no change at all. “It is very surprising, it’s counterintuitive,” because you’d expect the force to be transmitted through the hard container and egg whites and into the yolk, Wu said. This surprising result may be explained by the fact that egg whites and yolks share a very similar density, so under a hammer strike, the two may move together as a unit, he said. This would prevent the yolk from changing shape.

Since the brain has a different density than the surrounding CSF, a solid bonk on the head would likely warp the brain a bit. But based on their experiments, the brain may be more sensitive to rotational impacts, Wu said.

During an actual concussion, translational and rotational impacts happen simultaneously. “You really cannot completely separate one from the other … It’s always a combination of both,” Wu said.

Now that Wu and his colleagues worked out the physics of concussions in eggs, they plan to verify their results in brains. The lab recently developed an artificial brain, modeled from scans of human brains and surrounded by a transparent skull, which they put through impact experiments. The team also studies brains harvested from mice, but Wu said they aim to work with the brains of live animals in the future.

They’ve also teamed up with doctors at Thomas Jefferson University Hospital so they can compare results from the lab experiments with data from patients who have experienced traumatic brain injury, he added. This should help connect the dots between the physics observed in eggs and the actual injuries sustained in people.