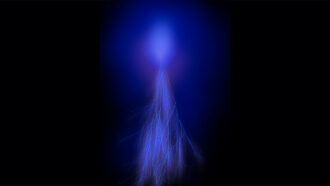 Jupiter may be the first planet besides Earth known to host atmospheric light shows called “sprites” or “elves.”

Sprites (SN: 6/14/02) and elves (SN: 12/23/95) are two kinds of atmospheric glows that form when lightning alters the electromagnetic environment in the atmosphere above a storm. On Earth, these electromagnetic upsets cause nitrogen molecules in the upper atmosphere to emit a brief, reddish glow. Sprites can brighten a region of the sky tens of kilometers across, while elves can span hundreds of kilometers (SN: 12/21/96).

Scientists suspected these atmospheric phenomena might appear on other planets that crackle with lightning (SN: 6/19/18). But until now, no one had seen hints of sprites or elves on another world.

From 2016 to 2020, the ultraviolet spectrograph on NASA’s Juno spacecraft, in orbit around Jupiter, caught 11 superfast flashes of light across the giant planet. Those flares, reported online October 27 in the Journal of Geophysical Research: Planets, lasted an average 1.4 milliseconds, which is about as fleeting as sprites and elves on Earth. The ultraviolet light was at wavelengths emitted by molecular hydrogen — the type of glow expected of sprites or elves on Jupiter, whose atmosphere is made mostly of hydrogen, rather than nitrogen.

Juno would need to spot a lightning strike at the same place as one of these bright flares to confirm that they actually are sprites or elves, says study coauthor Rohini Giles, a planetary scientist at the Southwest Research Institute in San Antonio, Texas. “But there is reasonably good circumstantial evidence,” she says. The flashes originated a few hundred kilometers above Jupiter’s layer of water clouds, where lightning typically forms, and several appeared in known stormy regions.

Observations of these events when Juno is closer to Jupiter may reveal their size, and help determine whether it is sprites or elves (or both) lighting up Jupiter’s atmosphere.