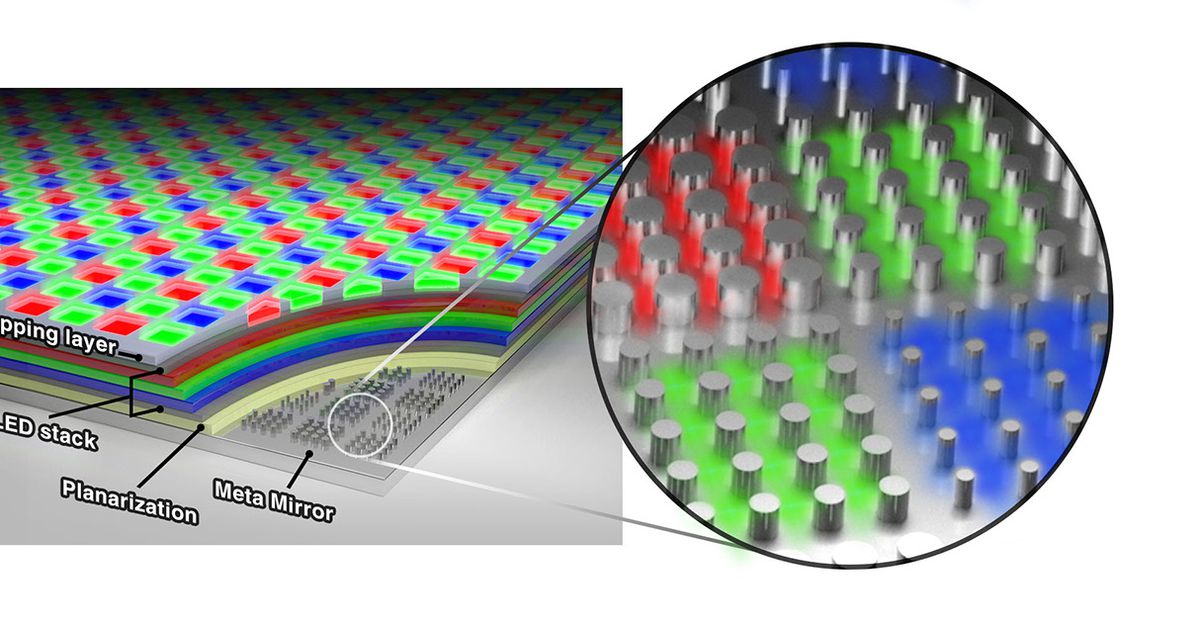 Screens are made up of stacked layers. Adding a reflective metal sheet could make a big difference in manufacturers’ ability to pack in the pixels. (Stanford /)

If you’re reading this article on a modern high-end smartphone, take a moment to move the device close to your face—as close as you can get before you can’t focus on it anymore. Even from that close, you probably can’t make out the individual pixels on the screen. That’s because the pixel density is too high. The new iPhone 12 Pro, for example, has a density of 460 pixels-per-inch, which makes each individual point too small for your human eyeball to make out.

The closer a screen sits to your peepers, the more pixels it needs to fool your brain into seeing smooth graphics, which is part of what makes convincing virtual reality such a challenge. With a VR headset, the display sits just a short distance from your face and has to be viewed through magnifying lenses. That can result in jagged video details and an annoying pixilation phenomenon called the screen door effect. Now, Stanford University researchers, in cooperation with the Samsung Advanced Institute of Technology, have begun to adapt tech meant for ultra-thin solar panels into displays that could reach over 10,000 pixels per inch (PPI), which could lead to some truly convincing VR graphics.

The new displays would leverage OLED technology, which you’ll currently find in high-end smartphones and ultra-high-def TVs. Typical LCD displays like earlier HD TVs used a backlight behind the screen and a polarizing layer with color filters in front of it to create the red, green, and blue pixels. With an OLED display, however, each pixel is its own light source that can turn all the way off when it’s not in use, which is why TVs that use the technology typically have much darker black levels and richer appearance than their backlit counterparts.

The new displays employ a thin layer of textured metal below the pixels themselves. The tech was originally designed to make solar panels more efficient. The texture comes from nanoscale corrugations that the researches say can manipulate the way light resonates within each pixel. As a result, the proof-of-concept displays have shown twice the efficiency when comparing energy usage to illumination. The researchers have also achieved super-high pixel density with the potential for up to 10,000 ppi.

While this could come in handy for devices like smartphones or TVs, it really sounds more promising for VR. Virtual reality headsets typically boast a stat called pixels per degree instead of per inch, because the former takes into consideration the distance of the screen from the observer’s eye in addition to the simple density of the screen itself. Higher PPD means sharper, more convincing VR images. As PPI goes up, however, PPD will, too, as long as the distance from the eye remains the same.

You can see a comparison of PPD between the popular VR headsets here. With 10,000 ppi displays, future headsets would have scores futures of magnitude higher than that.

Of course, high pixel counts still come with trade-offs. You need more processing power to push all of those pixels, which translates into higher energy usage that would offset some of the savings coming from the displays themselves.

Right now, this tech is still in its research phase, so it’s a long way from making its way into a consumer product. But, the race for higher-resolution VR is certainly on and we may continue to see solutions for it pop up in unexpected places.