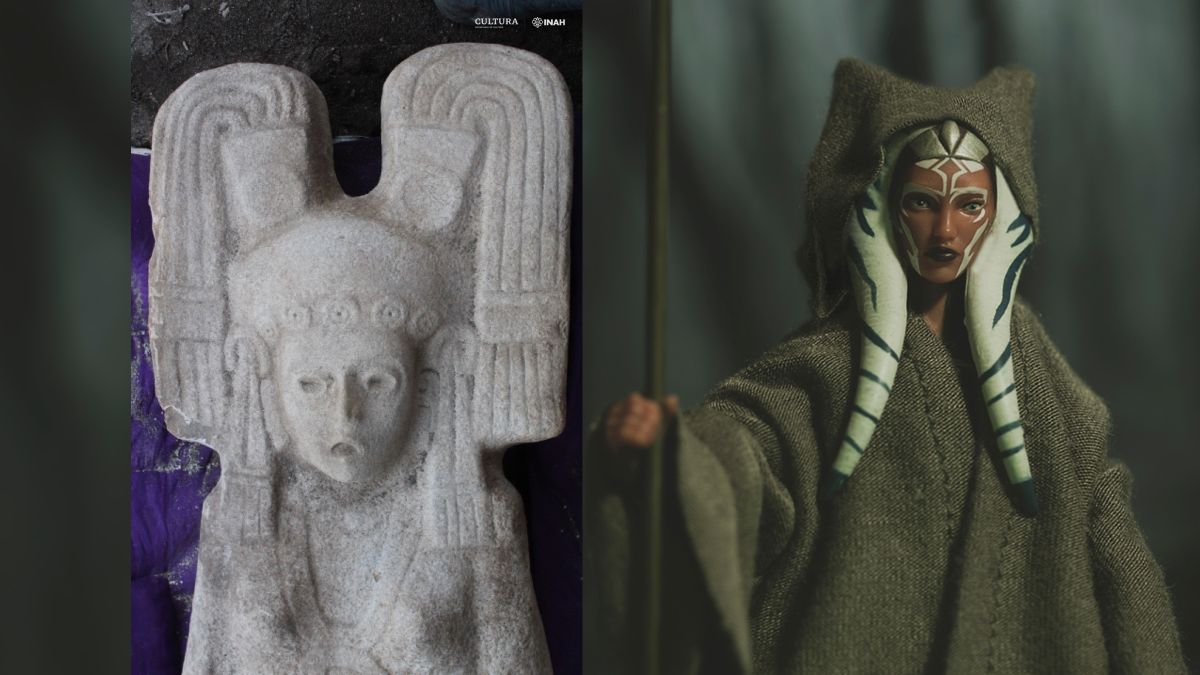 A 500-year-old statue of a mysterious woman wearing a large, “Star Wars”-like headdress has been discovered in central Mexico, according to Mexico’s National Institute of Anthropology and History (INAH).

The 6.5-foot-tall (2 meters) limestone statue depicts a young woman dressed in elaborate clothes and jewelry, including a circular pendant, known as an “oyohualli,” on a thick necklace; tassel-like earrings; and a headdress that rivals the head ornamentation of “Star Wars” Ahsoka Tano, a former Jedi apprentice turned warrior in the sci-fi series.

Just like Ahsoka Tano, this mysterious woman may have played a key role in her time. The statue likely depicts an elite woman, “possibly a ruler, because of her posture and attire, rather than a deity,” María Eugenia Maldonado Vite, an archaeologist at the INAH Veracruz Center who is leading the excavation, said in a statement (translated from Spanish).

Local farmers found the figure in a citrus field in the town of Hidalgo Amajac, in the Mexican state of Veracruz, on Jan. 1. The statue likely dates to the late Postclassic period (1450-1521) and has features reminiscent of the Huastec culture, a group of people on the Mexican Gulf Coast that lived in a pre-Columbian crossroads for cultures, arts and trade. The discovery of what was likely an important female ruler “confirm[s] the active participation of ruling women in the Huastec social and political structure,” Alejandra Frausto Guerrero, the Mexican secretary of culture, said in the statement.

The limestone statue is nearly 2 feet (60 centimeters) at its widest point and about 10 inches (25 cm) thick, Maldonado Vite said. The statue’s bottom has a “spike,” which allowed the female figure to be placed in the ground upright.

The woman’s face looks surprised; her eyes and mouth are opened wide. Those eyes “must have been filled with inlays of obsidian or another stone,” Maldonado Vite said. The carving depicts the woman wearing a long-sleeved shirt and a long skirt, but her feet are bare.

The statue’s location between the archaeological sites of the Aztec Tochpan (Tuxpan) and the Huastec Castillo de Teayo suggests that it has roots in both cultures. Most Huastec sculptures are thought to portray deities linked to Tlazoltéotl, an Aztec Earth-mother goddess also known for sexual impurity and sinful behavior, Maldonado Vite said. Tlazoltéotl depictions often show the goddess sporting a nose ring and wearing spindles with cotton tassels on her headdress, she said.

“The style of the young woman from Amajac is similar to representations of Huastec goddesses of the Earth and fertility, but with an external influence, possibly [the indigenous group] Nahua, as can be seen in the inlaid eye socket — a feature that does not belong to Classical Huasteca sculpture” but from another culture’s artistic tradition. Maldonado Vite said. “In addition, the cloth that Huastec women present in front of the skirt is always smooth, and this one has an ornament of knots and ribbons on it.”

Archaeologists plan to study the statue further, as well as the orchard where it was found. Until now, that site wasn’t known to archaeologists, but during her visit there, Maldonado Vite noticed small structures nearby that might be pre-Columbian residential buildings, she said.

This woman is far from the only known pre-Columbian female leader. “There are quite a few pre-Hispanic depictions of elite women and female rulers elsewhere, best known among the Classic Maya but also in Classic Zapotec bas-reliefs and Postclassic Mixtec codices,” Susan Gillespie, a professor of anthropology at the University of Florida, told the Associated Press (AP).

In fact, “Colonial-era Aztec documents mentioned women ‘rulers’ or at least holders of the crown to pass on to their successors,” Gillespie said. Women were highly valued in pre-Columbian cultures, and it wasn’t until after the European conquest that women lost their status.

That said, it’s unclear if the “Star Wars”-like statue of the elite woman is significant, or even if she’s correctly identified, Gillespie said. “Archaeology works best with repeated occurrences, to show a pattern,” she told the AP.

For now, the owners of the citrus orchard are holding on to the sculpture, but the INAH plans to discuss the statue’s future with the owners soon.