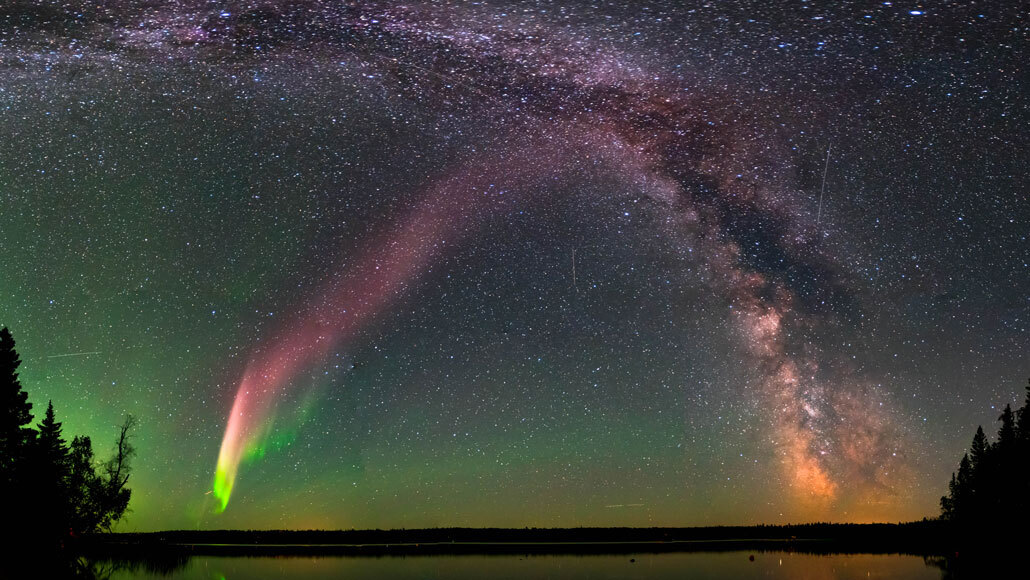 The atmospheric light show nicknamed STEVE may be even weirder than skywatchers thought.

STEVE, short for Strong Thermal Emission Velocity Enhancement, is a sky glow that appears south of the northern lights (SN: 3/15/18). STEVE’s main feature is a mauve band of light formed by a stream of plasma flowing westward through the atmosphere — a different phenomenon from the one that gives rise to auroras (SN: 4/30/19). But STEVE’s purple arc is often accompanied by a “picket fence” of vertical green stripes. That fence looks similar enough to the shimmering green curtains seen in the aurora borealis that scientists thought at least this part of STEVE could be a type of aurora.

Recently, studies of the picket fence’s color have cast doubt on its origins. Auroras form when electrons from the magnetic bubble, or magnetosphere, surrounding Earth cascade into the atmosphere (SN: 2/7/20). Those electrons make nitrogen in the air glow blue and oxygen glow green. While STEVE’s green picket fence also contains glowing oxygen, a dearth of nitrogen emission hints that the fence is not the same kind of light show as an aurora.

Now, researchers and citizen scientists have identified an even more unusual aspect of STEVE’s picket fence: small green streaks that stick out like feet from the bottom of some of its vertical stripes. The structure of these horizontal streaks cannot be formed by the electron showers responsible for auroras, researchers report in the December AGU Advances.

“It’s really weird, and nobody really knows what’s going on just yet,” says Joshua Semeter, an engineer at Boston University. But the new observations suggest these horizontal streaks — and perhaps the similarly colored fence — arise from some STEVE-specific process.

Semeter and colleagues examined horizontal streaks below picket fences in high-resolution images of STEVE taken by citizen scientists. The analysis suggested that the streaks in these images were not actually lines extended across the sky, but only appeared that way due to motion blur, as spherical blobs of glowing gas moved through the atmosphere.

These green blobs might arise from turbulence in the torrent of plasma that creates STEVE’s purple band, Semeter says. Positively charged atoms in the plasma may rush through the atmosphere largely unimpeded, forming a smooth purple arc. Meanwhile, electrons in the plasma are far lighter and more liable to get tripped up by Earth’s magnetic field lines — giving those particles a much bumpier ride through the air. As a result, those high-energy electrons may get tangled up in small vortices on the edge of the plasma stream, below the purple streak. There, the particles could excite pockets of oxygen to glow green.

For now, this is just a theory for what might be occuring. Computer simulations of plasma flowing through the atmosphere could test whether the idea is correct.

Whatever is going on with STEVE’s horizontal green features, “there’s some tantalizing evidence” that they’re related to the vertical picket fence, Semeter says. “We found events where these little feet appear before or at the same time as the green column above it.” And some horizontal and vertical streaks looked connected. “It appears that the green emission is actually expanding upward along the magnetic field line,” Semeter says. If so, that could explain why STEVE’s picket fence doesn’t have quite the same color as typical auroras.

While these observations do hint that the fence may arise from STEVE-specific particle interactions, it’s hard to be sure based only on photographs from the ground, says Toshi Nishimura, a space physicist at Boston University who was not involved in the work.

Future satellite observations could confirm whether electrons from the magnetosphere are pouring into the atmosphere in the region of a STEVE picket fence, he says. If satellites don’t see such electron showers, that will bolster the idea that the fence is different from normal auroras.