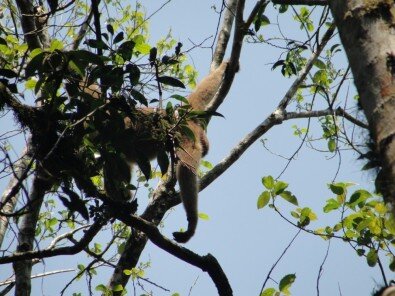 Mammal defaunation—the loss of mammals to extinction, extirpation and population decline—in the Neotropics and its adverse effects is the focus for two scientific papers produced recently by a group of scientists led by Juliano André Bogoni, an ecologist at the University of São Paulo (USP) in Brazil. The Neotropical realm extends south from the Mexican desert into South America as far as the Sub-Antarctic zone.

In the first paper, published in August in Ecosystem Services, the researchers estimate that defaunation has wiped out more than 40% of the ecosystem services provided by mammals, such as supplying animal protein for traditional populations and controlling disease, for example. However, small-bodied species are often “backed up” by others that perform the same ecosystem services.

Defaunation across the Neotropics has erased 56% of medium- to large-bodied mammal species, according to the second paper, published in September in Scientific Reports. The authors propose a novel Hunting Pressure Index (HPI) to indicate a site’s vulnerability to illegal hunting, based on factors that inhibit or intensify the activity. They also show that the surviving mammals are the smallest.

According to Bogoni, the researchers were surprised by the findings of the first study. “We knew that while mammal species are declining very rapidly in the Neotropics, there are still ‘backups’: for every species that disappears, another survives to perform the same service,” he said. “But this isn’t the case for all species. There are families like Cricetidae [rodents such as rats, mice, voles, etc.] in which there may be 30 species in a genus and as many as 100 species in ‘sibling groups’, which are closely related in evolutionary and morphological terms. In other words, there are many overlapping species among small mammals and flyers [bats]. If we had confined our analysis to medium- and large-bodied mammals, the loss of ecosystem services would have been far greater.”

Apex predators are cases in which there may be no such overlapping. “Only one backup exists in many places. Jaguar and puma, for example. When one is lost, only the other remains, if they coexist in the same place, which they often don’t, so loss of the species means loss of the services,” Bogoni said.

To establish the methodology, the scientists simulated two types of defaunation scenario: stochastic (i.e. random, assuming all groups of mammals decline at the same rate) and deterministic (driven by a feature of the environment or animal group). “The deterministic scenario is ‘real life’, what’s happening now,” Bogoni explained. “I had no idea which groups would be most penalized because we hadn’t yet published the second paper, so I also simulated a stochastic scenario for the sake of comparison.”

The ecosystem services most eroded under the different defaunation scenarios were ecotourism (43.4%), soil formation (39.8%), disease control (39.6%), protein acquisition for subsistence (38.0%) and ethnocultural identity (37.3%). The loss to these services under the deterministic defaunation scenario ranged from 38.9% to 53.0% compared to the baseline.

Under the deterministic scenario, the main ecosystem services affected across different defaunation regimes were ecotourism, soil formation, disease control, and protein acquisition by traditional people, all of which declined by over 40%.

According to Bogoni, some services, such as ethnocultural identity, can decline very quickly. “People mostly identify with apex predators or animals with charismatic ecomorphological traits,” he said. “Rats are unlikely to symbolize ethnocultural identity, whereas jaguars have gripped people’s imagination since pre-Columbian times. Another example of severe decline in services is the provision of animal protein for traditional communities in the form of subsistence hunting. This is a service without much backup and one of those that have declined most. The less backup, the greater the possibility of decline and even complete disappearance.”

Bogoni undertook a vast literature review in search of articles on the ecosystem services provided by mammals in accordance with ecomorphological criteria. Ecomorphology is the study of the interactions between morphological structures, ecology and evolution, including the behavioral factors that determine resource use. “It’s delicate to establish this trait because it’s putative: we predetermined that this or that animal provides certain services based on some of the animal’s characteristics,” he said. “The input came from data in the literature and criteria such as body size, diet, etc. To avoid biases and skewing, we consulted eight experts in mammalogy to obtain additional attributions of ecosystem services. The difference between our attributions and those of the experts was 3% on average. Service attributions in the paper were therefore highly credible, albeit putative.”

The researchers compiled data for 1,153 mammal species in 2,427 assemblages distributed across some 20.4 million square kilometers in Latin America. One definition of an assemblage is a taxonomically related group of species that occur together in space and time.

Bogoni said it took six to seven months to design the project, compile the database, and begin the analysis.

Loss of habitat and hunting

The second article discusses defaunation intensity and the pressure placed by hunting on large mammals in the Neotropics. “Based on current defaunation data I’ve been compiling since 2015 and statistics from the International Union for Conservation of Nature [IUCN] pointing to the approximate distribution of mammals in predetermined polygons, we assumed the polygons corresponded to the distribution of the animals concerned in pre-colonial America and made the comparison. I did the analysis for 1,029 assemblages,” Bogoni said.

He added that the researchers used a mathematical approach called confusion matrix to handle false negatives—situations in which an animal was presumed present but was not in the modern database. “Applying this matrix to ‘correct’ for possible false negatives, our results showed mean adjusted defaunation of 56.5%,” he said. “The most severe defaunation rates were in Central America, the Caatinga biome in Northeast Brazil, and the northern portion of South America.”

The key finding, he said, was that “assemblages have been downsized. A breakdown of the data by assemblage should show animals weighing 14 kilograms in 95% of cases according to the historical average, but now they weigh only 4 kg. In other words, only the smaller animals have survived. Defaunation is not only pervasive but also mainly concerns large-bodied animals, probably owing above all to loss of habitat accentuated by hunting.”

Bogoni and colleagues also propose a novel Hunting Pressure Index (HPI) based on factors that inhibit or intensify hunting and especially poaching. “In the section on methods we list several. For example, latitude: the lower the latitude, the closer to the equator, and the more species, biomass and productivity, the more likely there will be hunting than at the extremes, which are inhabited only by scattered populations of small-bodied animals,” Bogoni said. “The same goes for altitude: the higher the elevation, the less prey and the fewer opportunities for hunting. We considered other factors, such as artificial lighting or the ratio of primary productivity to plant biomass. Environments with high productivity and low biomass are probably pasturelands, and if there’s livestock there’s animal protein so there’s no need to hunt.”

The results showed fairly high HPI values for a vast swathe of the Neotropics totaling some 17 million square kilometers, including the Amazon, Cerrado (Central Brazil savanna), Caatinga (semi-arid Northeast), and Argentine Patagonia. “We’re trying to understand whether habitat loss or hunting accounts for more defaunation,” Bogoni said. “For now, all the research points to both as a synergistic effect, but we want to understand them separately so that conservation strategies can take these nuances into account.”