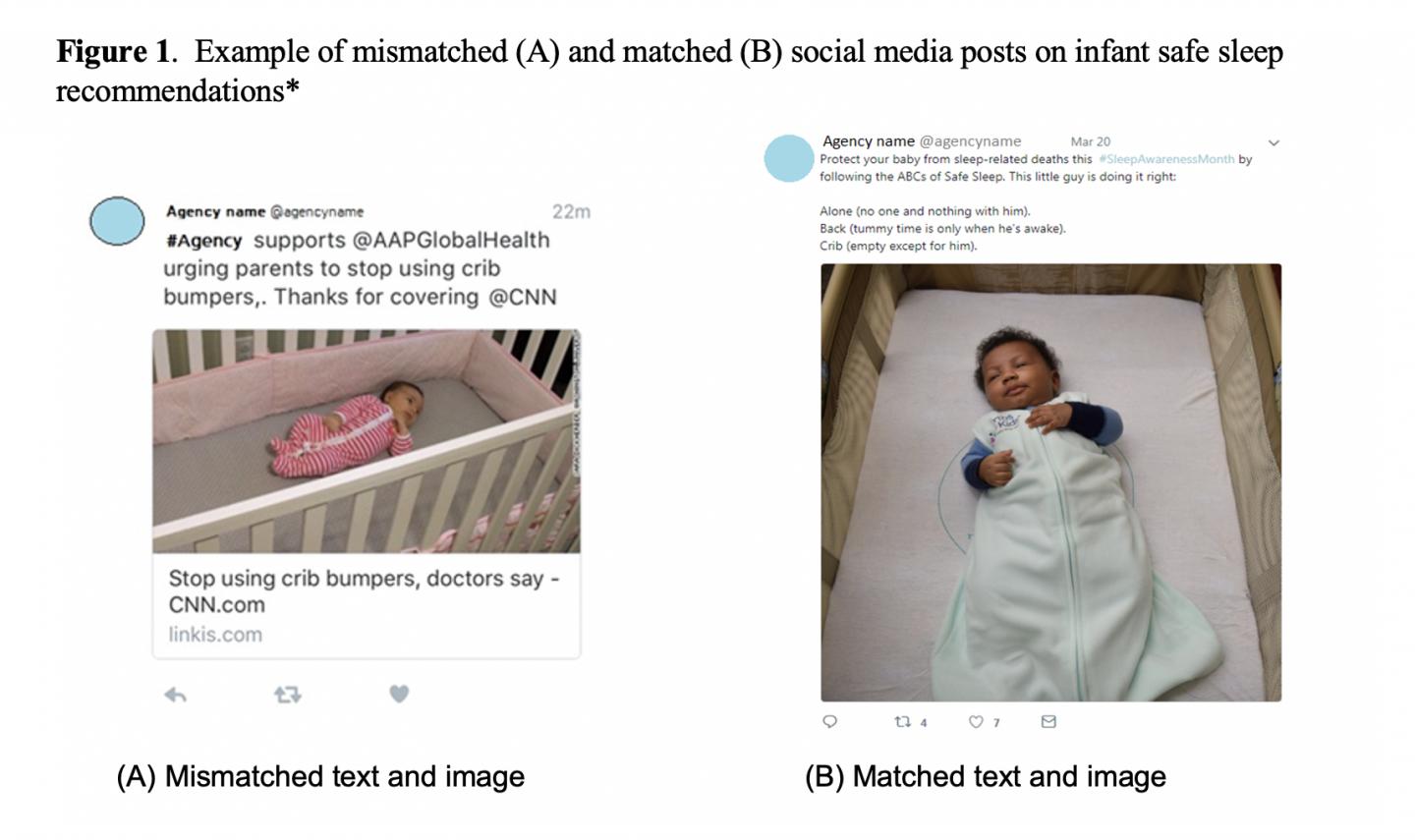 COLUMBUS, Ohio — When using social media to nudge people toward safe and healthy behaviors, it’s critical to make sure the words match the pictures, according to a new study.

After looking at social media posts, parents of young children were better able to recall safety messages such as how to put a baby safely to sleep when the images in the posts aligned with the messages in the text, the researchers found.

The study appears in the Journal of Health Communication.

“Many times, scientists and safety experts aren’t involved in decisions about social media for health agencies and other organizations, and we end up seeing images that have nothing to do with the safety message or, worse, images that contradict the guidance,” said lead author Liz Klein, an associate professor of public health at The Ohio State University.

Take the safe sleep example, for instance. The researchers found posts that advocated a bumper-free crib for baby but used an image of an infant in a crib with bumpers. They saw posts about preventing head injury with bike helmets illustrated by pictures of kids without bike helmets.

“In this study, we were trying to understand how much those mismatches matter — do people understand the message even if the picture isn’t right? Does the picture really matter?” Klein said.

Their answers came from research using eye-tracking technology to gauge the attention young parents paid to various posts, and subsequent tests to see what they recalled about the safety messages.

When the 150 parents in the study were shown a trio of posts with matched imagery and text and three other posts with mismatched visual and written messages, they spent far longer on the matched posts — 5.3 seconds, compared to the 3.3 seconds their eyes lingered on the mismatched posts.

Further, the matched messages appeared to make a difference in understanding and recall of safety messages. After accounting for differences in health literacy and social media use among participants, the researchers found that each second of viewing time on matched posts was associated with a 2.8% increase in a safety knowledge score.

“With nearly 70% of adults reporting use of social media, and many parents using social media and other internet sources to keep current on injury prevention strategies, social media is a great opportunity to broadcast safety and injury prevention messages,” said study co-author Lara McKenzie, a principal investigator in the Center for Injury Research and Policy at Nationwide Children’s Hospital in Columbus.

“As more health organizations and public health agencies use social media to share health information with the public, the findings of our study underscore the need to ensure that the imagery and text in social media posts are aligned.”

Klein said she understands that those managing social media accounts may be drawn to images that are the most attention-grabbing. But when it comes to health and safety, this study suggests that making sure the image and the text are sending the same message is more important.

“If you want people to put their medicine up and out of reach of children, kids to wear their bike helmets or new parents to remember that babies should always go to sleep on their backs, alone and in a crib — that’s where matching matters. Maybe save the eye-grabbing stuff and the humorous posts for different purposes.”

Klein said the findings in this study likely extend beyond child safety messaging to any number of health and safety campaigns, but that there’s more work to be done to understand how best to harness the power of social media for different types of public health communication.

“We need to pay more attention to how we communicate with the people we’re trying to influence with health and safety guidance. All of us can do a better job of thinking about how we use our social media accounts to contribute to better public health,” she said.