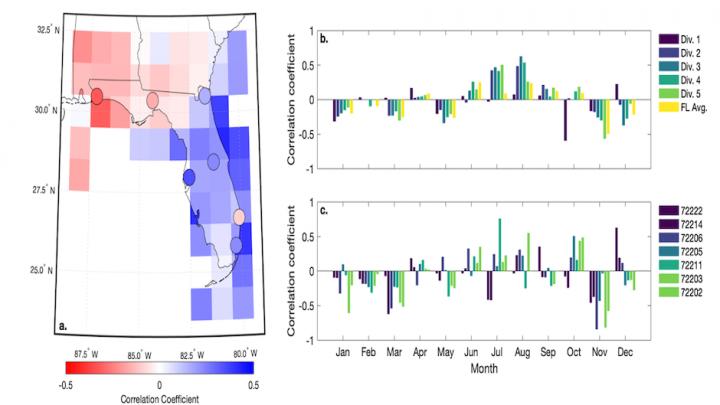 Scientists have known for years that Florida receives more rainfall in decades when North Atlantic waters are warmer than average, but the UM research team wanted to learn more about this interaction to help communities prepare for a wetter future. This study showed that ocean temperatures are most influential on Florida precipitation in late summer, during the region’s highest high tide events.

The researchers used a suite of climate models to show that the link between ocean temperatures and rainfall only develops as a result of human influences on the climate system, such as greenhouse gas emissions and industrial pollution.

“We know that humans are continuing to make North Atlantic waters warmer, so we expect an increase in late summer rainfall in Florida in the future,” said Jeremy Klavans, a PhD student at the UM Rosenstiel School and lead author of the study.

The study was funded by two National Science Foundation (NSF) grants-one from the NSF Climate and Large-Scale Dynamic program and one from the NSF Paleo Perspectives on Climate Change program.

About the University of Miami’s Rosenstiel School

The University of Miami is one of the largest private research institutions in the southeastern United States. The University’s mission is to provide quality education, attract and retain outstanding students, support the faculty and their research, and build an endowment for University initiatives. Founded in the 1940’s, the Rosenstiel School of Marine & Atmospheric Science has grown into one of the world’s premier marine and atmospheric research institutions. Offering dynamic interdisciplinary academics, the Rosenstiel School is dedicated to helping communities to better understand the planet, participating in the establishment of environmental policies, and aiding in the improvement of society and quality of life. For more information, visit: http://www.rsmas.miami.edu and Twitter @UMiamiRSMAS