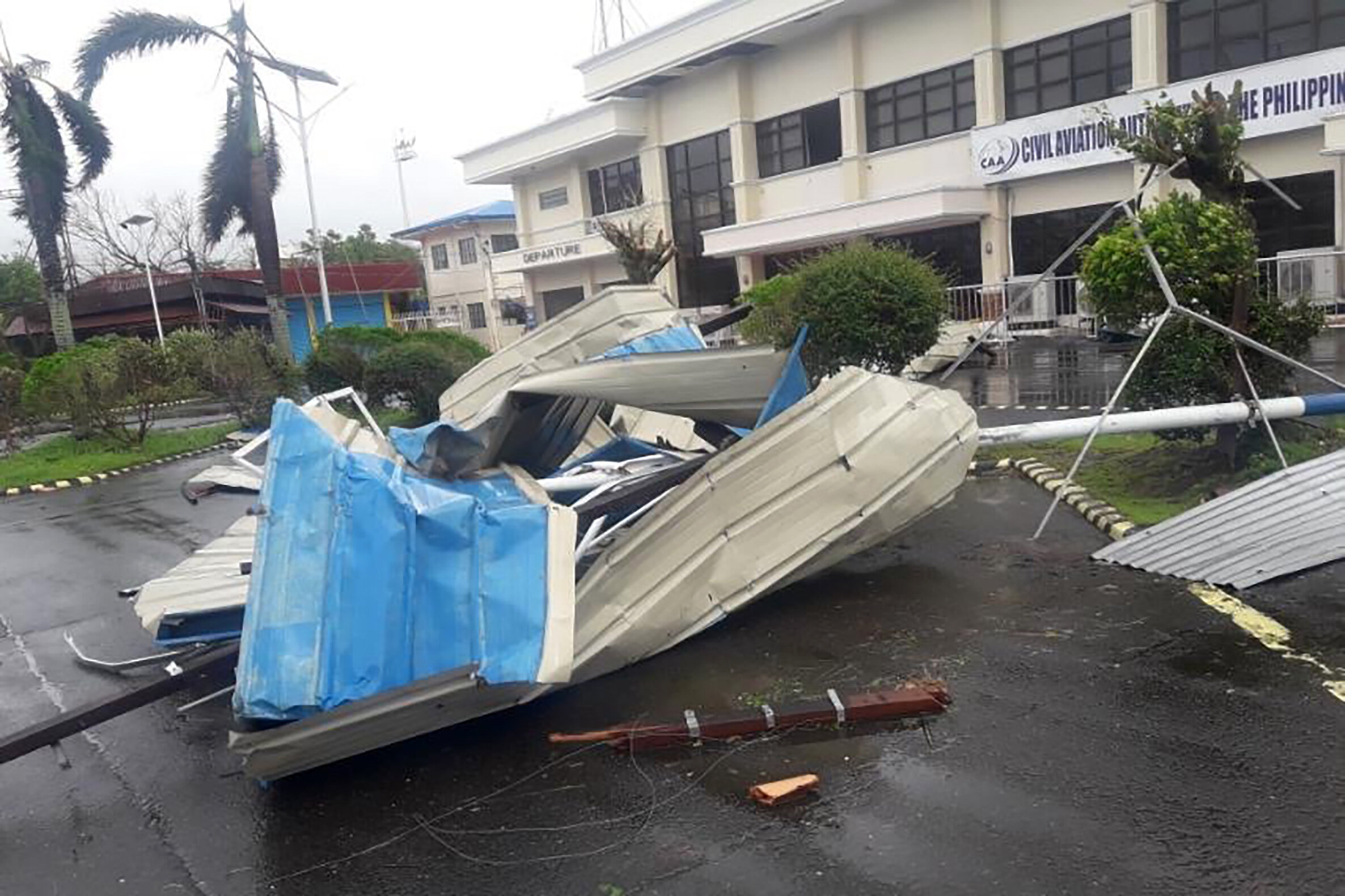 A super typhoon slammed into the eastern Philippines with ferocious winds early Sunday, knocking down power in several towns and prompting the evacuation of about a million people in its likely path, including in the capital, Manila, where the main airport was shut down.

Typhoon Goni hit the island province of Catanduanes at dawn with sustained winds of 225 kilometers (140 miles) per hour and gusts of 280 kph (174 mph). It was blowing west toward densely populated regions, including Manila, and rain-soaked provinces still recovering from a typhoon that hit a week ago and left at least 22 dead.

There were initial reports of deaths, including a man who was reportedly pinned by a fallen tree in Albay province, but authorities said they were still verifying the details.

About two hours after it blew ashore, the typhoon battered Albay with a slightly weaker sustained winds but more powerful gusts of 310 kph (193 mph), forecasters said.

Diane Joco scrambled with her husband, parents, siblings and cousin out of their flimsy houses on stilts on the shores of Calauag town in Quezon province when the wind began to batter their wooden homes. Goni was forecast to hit parts of Quezon Sunday afternoon.

Like many villagers, Joco and relatives decided not to evacuate and stayed in a neighbor’s sturdier house close to the coast to watch over their home.

“We should be nearby to be able to repair any damage to our house quickly, otherwise it will fall apart and be blown away. We have no other house,” Joco told The Associated Press by phone. She suddenly yelled as she spoke, saying a part of the tin roof of her neighbor’s house was nearly ripped off by a frightening gust.

Albay Gov. Al Francis Bichara told a televised meeting of top disaster-response officials that at least two people died in his province while mudflows from Mayon volcano endangered some villagers. Other officials, however, said they were still checking those reports.

Ricardo Jalad, who heads the government’s disaster-response agency, said the typhoon’s destructive force can cause major damage. “There are so many people who are really in vulnerable areas,” he said.

The Philippine weather agency reinforced those concerns, saying that within the next 12 hours, people will experience “catastrophic violent winds and intense to torrential rainfall associated with the region of the eyewall and inner rain bands.”

Residents have been warned of likely landslides, massive flooding, storm surges of up to 5 meters (16 feet) and powerful winds that can blow away shanties.

One of the most powerful typhoons in the world this year, Goni has evoked memories of Typhoon Haiyan in November 2013, which left more than 7,300 people dead and missing, flattened entire villages, swept ships inland and displaced more than 5 million in the central Philippines.

Jalad said nearly a million people have been preemptively moved into emergency shelters. He warned of storm surges that could inundate coastal villages, including in Manila Bay.

Forecasters said the typhoon’s eye may pass about 70 kilometers (43 miles) south of metropolitan Manila, the sprawling capital of more than 13 million people, around nightfall on Sunday.

Manila’s main airport was ordered shut down for 24 hours from Sunday to Monday and airlines canceled dozens of international and domestic flights. The military and national police, along with the coast guard, have been put on full alert.

Hundreds of COVID-19 patients were moved to hospitals and hotels from tent quarantine centers, Jalad said. The war-like typhoon preparations will further strain government resources, which have been drained by months of coronavirus outbreaks. The Philippines has the second-largest number of confirmed infections in Southeast Asia.

The Philippines is lashed by about 20 typhoons and storms a year. It’s also located in the so-called Pacific “Ring of Fire,” where earthquakes and volcanic eruptions are common and makes the poor Southeast Asian nation one of the world’s most disaster-prone.